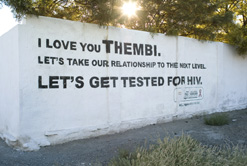 Recent studies of how HIV/Aids is covered in South Africa’s print media reveal some encouraging trends, including a shift away from sensationalist writing towards a more human rights-orientated standard of reporting.

But the research shows that more can be done to improve this coverage, such as strengthening the voice of women living with HIV/Aids, and tackling stigma and discrimination more directly.

The first survey, which assessed HIV/Aids coverage from 2002 to 2003, provided comparative data for the second study, which ran from 2007 to 2008. The research was conducted by HIV/Aids and the Media Project and Media Monitoring Africa (MMA).

The findings were presented at Wits University in Johannesburg in late October, in a discussion forum attended by academics, health journalists, medical professionals and a range of NGOs.

HIV no longer a ‘conflict’ issue

Since the first survey was carried out, there have been significant social and political changes in South Africa.

After Thabo Mbeki became president in 1999 he increasingly flouted scientific opinion, arguing that HIV was not the cause of Aids and that antiretroviral (ARV) drugs were toxic and not useful for patients. Treatment for the HIV-positive lagged, and Health Minister Manto Tshabalala-Msimang incurred international condemnation for promoting herbal remedies as a viable alternative to ARVs.

This is further discussed in a 2008 Harvard University study by Zimbabwean physician Dr Pride Chigwedere.

The government’s stance sparked a huge controversy that was closely followed by the local media. HIV-related articles were frequently given front-page status, although “coverage was largely reactive, frequently ill-informed and pandering to a kind of sensationalism that sells newspapers”, the first MMA study said.

When Kgalema Motlanthe replaced Mbeki as president in 2008, the government’s stance on HIV/Aids did a U-turn. Barbara Hogan became the new minister of health, and immediately made HIV/Aids a priority by launching a new prevention campaign and securing a R165-million (US$22-million) donation from the UK for ARVs.

A new National Strategic Plan (PDF, 319 KB) came into force to drive a multi-sectoral response to the epidemic and, in 2009, the long-dormant South African National Aids Council made groundbreaking recommendations on combating HIV/Aids to the government.

This shift “minimised the usual points around which conflict would erupt”, the second study suggested, and led to HIV/Aids being integrated into other stories about related matters, as opposed to it being stand-alone issue.

Another development at this time was a “growing awareness of the relationship between the tuberculosis epidemic [in South Africa] and HIV, and the impact of HIV on children”, the research said.

“HIV was far more prominent in the media when there was a conflict during the Mbeki government era. But this is not an HIV thing, it’s a news thing. Conflict is very pertinent to news,” Malan said at the discussion forum.

“Now we can step out of the conflict-ridden space. I can stop being an activist and can just be a journalist – I welcome the change,” Ndaki said.

“As health journalists we’re at such important crossroads in South Africa … it’s a good place, but there are still challenges. HIV must become a topic like any other – we’ve got to make that shift,” she added.

“Dealing with a concept of the scale and complexity of HIV/Aids requires the full participation of all elements of society. Mainstreaming refers to taking ownership of, and adequate prioritisation of, HIV/Aids interventions in the day-to-day activities of all sectors of society,” the MMA research said.

The two surveys “point to a degree of successful mainstreaming. HIV is moving away from a presentation of it being only relevant to people on the margins of society, that it is news of a special type that can only be framed in particular ways, and that is divorced from all the other everyday events and issues that are covered in the press.”

Although HIV/Aids is now being treated differently in newsrooms and the lack of conflict has led to a decline in coverage, regional newspapers are still showing a strong commitment to the issue.

“This seems to suggest that the decline in coverage cannot be characterised as a blanket reduction in focus of the print media on HIV, but rather a result of a ‘decentralisation’ of HIV stories,” the second study showed.

“In other words, although the topic is less frequently given priority, or rated as newsworthy in the high circulation and prestigious national press, the regional press with its more targeted readership is still placing emphasis on covering HIV.”

Research indicates that this is a positive development that shows a growing awareness and sensitivity towards HIV/Aids at grass roots, as opposed to the “presentation in broad and generic terms at the national and abstracted level”.

In comparing the first and the second study, an interesting trend emerged regarding journalists’ sources: In 2003 government was cited most in articles about HIV/Aids, but by 2008 the voice of civil society – including the medical profession and business – became more prominent.

“Government is still key to coverage but the balance has shifted,” survey two showed.

This is positive as it demonstrates journalists’ independence from government’s viewpoint, giving more attention to society’s input. But, the research warns, reporters should be aware that “the pharmaceutical industry and activist groups are just as liable to present information with a particular bias”.

Malan points out another factor: “What you see in the media is a strong reflection of who’s accessible and knowledgeable and who’s not. Often those in the private sector are easier to get hold of than government officials”, and that is why they are quoted more often.

“It’s highly encouraging that HIV has become part of the mainstream, but that does mean it battles for the attention of news editors. Now the challenge to journalists is to make articles interesting without there being controversy,” Valentine said at the forum.

The other difficulty is fewer resources. Hard economic times have forced media houses to cut their budgets, resulting in journalists having to cover a variety of topics. Specialised reporters are becoming increasingly rare.

Tighter budgets also restrict travel allowances, so writers do more work over the phone from the office. This can compromise the quality of information, as it’s always preferable to speak to a source face-to-face.

Another challenge is space constraints. “Leading articles used to be 1 000 words, now they’re cut down to 600 words or less. There’s less space to explore very complex issues and often the scientific stuff is just explained in a sidebar – this is not sufficient,” Palitza said.

“We have seen a big shift to online media,” said Ndaki. “On the internet you can place longer, more analytical pieces that newspapers don’t have the space for.” In keeping with this trend, a number of electronic publications with a HIV/Aids focus have come to the fore.

In the past HIV/Aids reporting in South Africa has been criticised for lacking ethical integrity and a tendency towards sensationalist language and headlines. This is explored in Health-e managing editor Kerry Cullinan’s article: “The media and HIV/Aids: A blessing and a curse”.

Skewed reporting has resulted in a troubled relationship between the media and the scientific community, as well as between government and the media.

But much has been done in recent years to ensure that journalists adhere to codes of conduct governing the ways in which HIV is reported.

The South African Editors Forum’s Media Action Plan launched a set of guidelines (PDF, 123 KB) in 2005 to encourage reporting that promotes respect for human rights and the highest ethical standards.

The MMA study found that only 3% of the articles between 2007 and 2008 violated the guidelines, which include the promotion of clarity and respectful discussion of sex, cultural practices and other sensitive issues; respecting the rights of people living with HIV/Aids; and avoiding discrimination, prejudice and stigma.

“Although there were few contraventions of the guidelines, research shows that gender and human rights issues pertaining to HIV/Aids are still under-reported,” Duncan said at the forum.

The studies found that “very few of the articles have an explicit human rights agenda with only 1,6% of the items monitored having a human rights topic”.

To address this, Ndaki suggests that media audiences become more active in shaping the nature of HIV/Aids reportage. “The media itself often seen as the scapegoat. Readers play a role too and it’s up to them to hold the press accountable and see to it that harmful or ineffective messages are changed.”

“We as journalists need to teach the people we interact and work with about news values and responsible reporting. The more people who know about that, the more empowered they will be to manage and respond to the media,” Malan said.