“If we are to overcome the devastating legacy of the past, communities must take responsibility for our development,” writes Minister in the Presidency Jeff Radebe on the eve of the State of the Nation Address. “We call on South Africans to scrutinise government decisions that directly affect them, hold public officials to account and ensure service delivery is fair.” 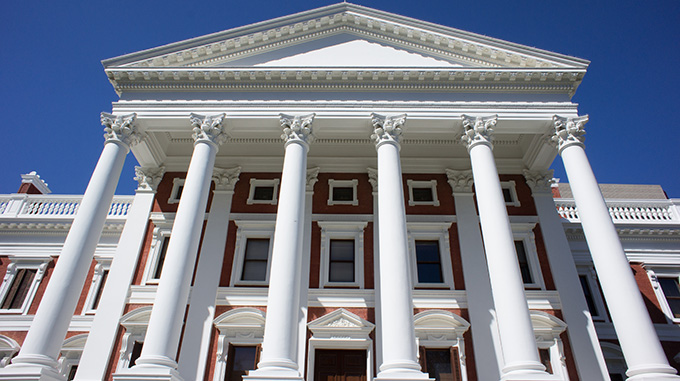 South Africa’s State of the Nation Address is held during a joint sitting of the National Council of Provinces and National Assembly at the Houses of Parliament in Cape Town every year. (Image: Wikimedia Commons)

Some citizens associate the annual State of the Nation Address with the pomp and ceremony that goes hand in hand with the opening of Parliament. For others, the President’s address to the joint sitting of the two houses of Parliament is the symbolic start of the new year of legislative business.

When President Jacob Zuma delivers his sixth State of the Nation address on Thursday 12 February at 7pm he will take the nation into his confidence and report back on the progress made since his last address. He will also speak on the path the government has charted for the future.

At the podium, the president represents the hopes, dreams and aspirations of all South Africans. In doing so he will once again chart a course that seeks to address the triple challenges of unemployment, poverty and inequality.

The State of the Nation Address can be likened to a ship’s captain charting a course to an unmapped destination. Charting the course requires forethought and planning. On any such journey there will be travails and obstacles, but through sure and consistent leadership the ship will ultimately arrive safely in port.

Since 2008, when the global financial crisis struck, the international arena has been a sea of turbulence. Global uncertainty has plagued markets and many nations have struggled to stay afloat. South Africa has not been immune to this. Our nation too has felt the pain. However, through sound planning and consistent leadership we have been able to navigate our way through choppy seas to a safe landfall.

Our Constitution provides for the separation of powers between the various pillars of state. The administration, under the leadership of the president, is charged with the day-to-day running of the country. Parliament on the other hand ensures oversight, accountability and approves legislation. The State of the Nation address is a platform for the president to account to Parliament and the nation.

Some consider the address as nothing more than another talk shop. But no nation can move forward without consistent planning and unwavering leadership.

Last year we celebrated 20 years of freedom. Only the most partisan would dispute that the lives of South Africans have improved immeasurably since 1994. Now as we enter the third decade of freedom we have a duty to build on this legacy.

It’s simply not good enough to assume that the government alone can solve the challenges we face. Our nation was built on the premise that we would not be defined by our brutal past; every citizen can and must do their part to move South Africa forward beyond the ideas that divide us.

The Presidency will give direction, but we too need to play our part and help the government overcome the remaining obstacles. The challenges we face are not government’s alone. Within all of us resides the potential to find innovative solutions that will help to move South Africa toward the safety of a calm sea and a safe harbour.

Those who complain, but do nothing to change our circumstances, are failing the nation and our Constitution. Within the Constitution and our system of governance are mechanisms that allow South Africans to participate and make their voices heard. It begins with South Africans showing an interest in how government is run, having their say and engaging in robust debate with decision-makers on issues that affect our communities.

The many avenues open to engage directly with government must be used, be it the Presidential Hotline or Izimbizo. South Africans should also engage with our elected representatives to ensure that matters that affect our daily lives are discussed in Parliament.

If we are to overcome the devastating legacy of the past, communities must take responsibility for our development. We call on South Africans to scrutinise government decisions that directly affect them, hold public officials to account and ensure service delivery is fair. We need partnerships between government, citizens and civil society to better deal with issues that affect people.

On Thursday, President Jacob Zuma will address the nation. Don’t just tune in and listen: engage meaningfully. Together we can become the change we want to see.