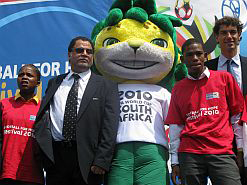 Alexandra, a sprawling and impoverished township north-east of Johannesburg city centre, may not have a stadium large enough to host any 2010 Fifa World Cup matches, but its residents will soon get the chance to witness top football action there.

The newly built No. 3 Square Sports Facility, situated in the heart of the township, has been announced as the host stadium for the 2010 Football for Hope tournament, which will take place between 4 and 10 July.

Fifa and its partners, including the City of Johannesburg, Street Football World and the local organising committee, launched the football facility on 25 March in Alex, as the township is known to locals.

Although it has a small grandstand capacity, No. 3 Square Sports Facility is a standard stadium with a full pitch and private dressing rooms. It also has numerous basketball, volley ball, netball and tennis courts.

“We need to applaud Football for Hope for choosing Alexandra,” said Bafana Sithole, a mayoral committee councillor for the City of Johannesburg. “Alexandra’s people have [now] got hope.”

It was a good decision to host the tournament in Alex, said Frederico Addiechi, Fifa’s head of corporate social responsibility. “We are sure we will not regret this decision after 2010,” he said.

The township will stage a spectacular event, said former Bafana Bafana midfielder and Alex resident Alfred Phiri. “We’re ready to host the 2010 Football for Hope [games],” he said. “We have never had a project like this in Alex …”

Thirty-two football teams from 40 countries will participate in the Alex tournament in July, just as the Fifa World Cup action hots up elsewhere around the country.

The Football for Hope matches will be played in a seven-a-side format on a field the size of a basketball court, making the games fast-paced and more exciting.

Alex’s team will comprise nine youngsters, aged between 15 and 18, from the township. They are all active members of the NGO Play Soccer, which uses football to teach good social values.

Five continents will be represented in the tournament, with Africa having 13 teams, including ones from Nigeria, Mali, Uganda, Lesotho and Zambia.

Street Football World’s managing director, Jurgen Griesbeck, explained that one of the teams, the Peace Team from the Middle East, will represent two countries: Palestine and Israel, which have long been locked in deep conflict.

The Australian team, meanwhile, will not only consist of Australian nationals, but also a variety of foreigners living in that country. The entire tournament will be a mixed one, with equal numbers of girls and boys participating.

The matches will not be officiated by referees, as players themselves will sort out disagreements through dialogue during games. “You will see fair football…,” Griesbeck said.

The youngsters chosen to play in the tournament are ambassadors of social change in their communities, and that’s why they were selected. “We’re talking here about role-models,” he added. “They are champions in heading movements in their communities.”

Sello Mahlangu, an 18-year-old Alex resident, could not hide his excitement about the upcoming tournament. A coach for Team Alexandra, Mahlangu said he felt honoured to have been selected to play.

“It’s a great honour for me to participate in this event,” he said. “For this to happen here in Alex is an inspiration.”

For 18-year-old Catherine Skhosana, a passionate footballer, participating in the Football for Hope games is an achievement. “Young people, especially young black women, will see that we are getting somewhere,” she said.

The Alex team have been vocal about their plans to win the tournament and earn the township a place in world football history. “We’ll get all the way to the final,” Mahlangu told Danny Jordaan, CEO of the local organising committee.

Football for Hope is not your average football tournament. The participating youngsters, who are all from disadvantaged communities, will also take part in activities promoting an exchange of ideas and experiences.

They will be encouraged to discuss topics such as HIV/Aids and take part in football coaching workshops, among other initiatives.

Fifa uses Football for Hope, founded in 2005, as a way to bring about social change in communities across the world. “We want to celebrate the contribution of football in social development,” said Griesbeck.

The Football for Hope tournament “is the world cup of change and opportunities”, Jordaan said. 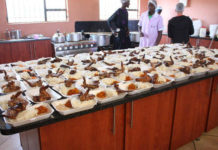