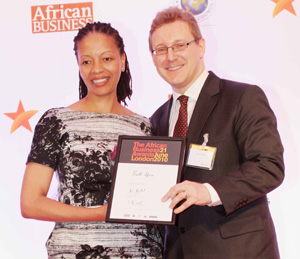 Prime Ministers of Cameroon and Togo honour African business leaders at a gala ceremony in London on 21st June.

At an awards ceremony organised by African Business magazine and the Commonwealth Business Council (CBC), Prime Ministers, Philemon Yang and Gilbert Fossoun Houngbo together with 500 African ministers, ambassadors, government officials and top business leaders from all regions of Africa celebrated the achievements of prominent businessmen and women driving growth and development in the Continent.

The Prime Minister of Cameroon Philemon Yang presented the Lifetime Achievement award to Sir Samuel Esson Jonah, who was honoured for his outstanding contribution to the development of the private sector in Africa. Nedbank group of South Africa received the award for Good Corporate Governance from The Prime Minister of Togo Gilbert Fossoun Houngbo. The much coveted African Business of the Year went to Citadel Capital, Egypt while Jubril Adewale Tinubu,CEO of Oando Plc, Nigeria won the Business Leader of the Year. Laurence Do Rego, Group Executive Director, Finance and Risk, Ecobank Transnational Incorporated, Togo, received the hotly contested Outstanding Businesswoman of the Year award.

Dr Charles Murigande, Minister of Education of Rwanda, picked up on behalf of his country the Award for Most Improved Investment Climate. Maimouna Coulibaly Sidibe of Faso Kaba Seed Company in Mali was honoured with the Best Agricultural Development award for her seed initiative which has revolutionised agricultural productivity in her country. The Tourism Destination of the Year went to South Africa, host of the World Cup event. Yara, the fertiliser company from Norway, won the Best Global Business in Africa and Safaricom was awarded the prize of Telecoms Company of the year for their innovative solutions and strong track record. Finally, FirstRand Foundation, the CSR arm of the FirstRand Group, was awarded the prize for Best Corporate Citizenship/Social Responsibility

The event was co-hosted by African Business magazine and the CBC, and sponsored by BGI, brewers of Castel Beer, Eko Atlantic, Nimasa, Ecobank and Arik Air. In line with its mission to bolster Africa’s economic development, the Awards were also partnered with the Alliance for a Green Revolution (AGRA) and supported by the African Development Bank. A distinguished panel of judges chaired by Omari Issa, CEO of the Investment Climate Facility selected winners in seven categories from a pool of nominees that came from all over the African continent. The winners of the four remaining categories were selected by the advisory board comprising of the editorial team of African Business magazine, and experts from the CBC.

Omar Ben Yedder, Associate Group Publisher of African Business magazine, the organiser of the event said: “The Awards are even more significant this year, as it takes place during the World Cup season, and thus resonates with the new optimism of Africa as a continent capable of realising the opportunities that abound there.”

Dr. Mohan Kaul, CEO of the CBC, stressed the importance of these Awards: “At a time of economic turmoil and uncertainty, awards such as these become even more important. The African Business Awards contribute to the reappraisal of Africa’s economic potential through a competition that recognises business innovation and achievement, and offers role models for aspiring entrepreneurs.”

IC Publications holds two annual awards ceremonies. The next one will be the African Banker Awards which will coincide with the IMF-World Bank meetings, which this year will take place on the 8th October 2010 in Washington.

Award for Most Improved Investment Climate
The Republic of Rwanda

The African Business Awards 2010 were sponsored by NIMASA, BGI, Eko Atlantic and Ecobank Transnational Ltd. The preferred airline sponsor was Arik Air.
This event was spearheaded by African Business magazine and the Commonwealth Business Council (CBC) and organised by IC Events. The awards were supported by the African Development Bank. Partners include the Alliance for a Green Revolution (AGRA) and BusinessinAfrica Events UK Ltd.

About African Business magazine:
After 40 years of continuous reporting on Africa’s economic landscape, the London-based African Business magazine has justifiably earned its reputation as the most influential business publication in the continent. Published by IC Publications, African Business is distributed in over 100 countries around the world and has become essential reading for organisations, institutions, companies and individuals involved in the economic development of Africa. IC Publications produces in total ten pan-African titles in English and French.

About CBC:
The Commonwealth Heads of Government Meeting established the Commonwealth Business Council (CBC) in October 1997 to involve the private sector in the promotion of trade and investment. The CBC acts as a bridge for co-operation between business and government, concentrating on efforts to help remove barriers to trade, mobilise investment into Commonwealth countries, foster a good environment for business and investment, promote good practice in corporate governance and corporate citizenship, and facilitate the engagement of the private sector in information communication technology for development initiatives, especially in less developed countries.