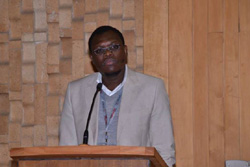 Brand South Africa, in partnership with the Department of Trade and Industry, hosted a dialogue with African Heads of Mission based in South Africa at the CSIR in Pretoria on 30 September.
Brand South Africa CEO Miller Matola was joined at the dialogue by African representatives from Malawi, Mauritius, Rwanda, Kenya, Cameroon, Algeria, Madagascar, Libya and Zambia as well as Dave Malcomson from the Department of International Relations and Co-operation, Prof Vusi Gumede of the Thabo Mbeki African Leadership Institute, and Dr Petrus de Kock, Head of Research at Brand South Africa.

As Africa commemorates 50 years since the formation of the Organisation of African Union, participants deliberated on the timely issue of African Integration and Improved Competitiveness through Intra-Africa Trade and Infrastructure Development.

African integration at all levels – political, economic and social – has been a matter with which Heads of State and Government have been seized since the establishment of the OAU. Increased intra-African trade is seen as a critical enabler to improve the lives of citizens on the continent and this debate has been led by Heads of State and Government at continental and regional fora. Participants at the dialogue were emphatic that Africa needs to move beyond talking to the implementation of agreed policies and frameworks to drive this development.

While Brand South Africa CEO Miller Matola reflected on the issue of the potential of African infrastructure to drive African development into the next 50 years, DIRCO’s Dave Malcomson cautioned African representatives that unless governments, working with civil society and citizens, deliver on the aspirations of the people of the continent, Africa shall be judged harshly by future generations. Prof Gumede of the Thabo Mbeki Leadership Institute reminded participants that in 80 years, Africa will be in the 22nd century and that it is indeed time that Africa makes the 21st century its own.

This dialogue was part of Brand South Africa’s efforts to build partnerships with civil society and social partners to enable all stakeholders to play their part in creating a competitive South Africa in a competitive Africa.