Apartheid laws were designed to segregate South Africa’s population in terms of race. The majority suffered discrimination in terms of education, economic rights, social standing, and eventually even citizenship. Today, the Bill of Rights enshrines many rights denied in the past.

Most South Africans were denied many basic human rights during the apartheid. As the country celebrates 23 years of democracy, we shine a light on some of the laws that existed back then, and how things have changed today.

“The state may not unfairly discriminate directly or indirectly against anyone on one or more grounds, including race, gender, sex, pregnancy, marital status, ethnic or social origin, colour, sexual orientation, age, disability, religion, conscience, belief, culture, language and birth.” – Bill of Rights

This law stopped black South Africans from owning or even renting land that was outside the reserves.

Now: It was cancelled by section one of the Abolition of Racially Based Land Measures Act No 108 of 1991. This meant that anyone could own or rent any land.

Under this law, only white South Africans over the age of 18 were allowed to vote.

Now: Every person who has a valid South African identity book, and is over the age of 18, can register and vote. “Every adult citizen has the right to vote in elections for any legislative body established in terms of the Constitution, and to do so in secret,” reads the Bill of Rights.

3. Then: The Prohibition of Mixed Marriages Act of 1949

When the National Party came into power in South Africa in 1948, it implemented various apartheid laws. This act banned marriage between any white person and a person of another a different racial group.

Now: Everyone has the right to marry the person of their choice. The Civil Union Act of 2006 also allows same-sex partners to marry.

This law made it illegal for people from two different race groups to have sex. It also prohibited other acts considered illegal under the Christian government of the time, such as adultery or attempted adultery.

Now: All South Africans are free to choose their sexual partners, and the number of partners they have.

This act outlawed the South African Communist Party (SACP) and all communist propaganda. It also authorised the punishment or banning of anyone participating in communist activities.

Now: The SACP is part of the Tripartite Alliance with African National Congress (ANC), which rules the country, and the Congress of South African Trade Unions (Cosatu).

This law made residential separation by race group mandatory. The government set up different areas where blacks, coloureds, Indians and whites could live. It led to thousands of people being relocated to designated areas based on race alone.

Now: People are free to live where they want to live. “Every citizen has the right to enter, to remain in and to reside anywhere in, the Republic,” states the Bill of Rights.

7. Then: The Population Registration Act of 1950

This act divided South Africans into different race groups; these groups determined an individual’s economic, social and political rights. It used methods such as the ‘pencil test’ – a pencil was placed in an individual’s hair to determine the kink. If the pencil did not easily fall out, then the individual fell into the black population category.

Now: While South Africans are still classified according to race, it is solely the basis for collecting population census information and addressing the inequalities of the past.

The government set up areas known as homelands for the black population. Each operated independently under a leader, but they were still subordinate to the South African government. 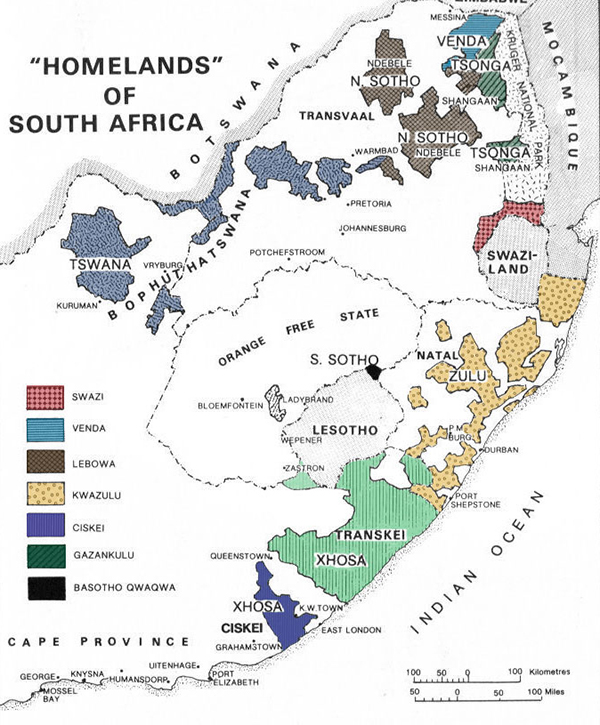 A map shows the homelands set up by the apartheid government. (Image: Wikipedia)

Now: The homelands are all a part of South Africa, which is a single republic divided into nine provinces.

9. Then: Natives (Abolition of Passes and Co-ordination of Documents) Act of 1952

Under this act, the old pass book was replaced with a reference book containing a person’s image, place of origin, tax records, employment details, fingerprints and encounters with the police. All black men were required to carry this hated document, colloquially known as a dompas, and failure to produce it when asked by the police was an offence. When the system was extended to black women, they protested by marching from Johannesburg to the Union Buildings in Pretoria, in 1956.

Now: There is a standard identity document for all citizens of South Africa.

Under this education system, black children were taught a different curriculum from white children. The aim was to provide them with skills to work in manual jobs only. “There is no place for the Bantu in the European community above the level of certain forms of labour,” said Dr HF Verwoerd, the prime minister and prime architect of apartheid. “Until now he has been subjected to a school system which drew him away from his own community and misled him by showing him green pastures of European society in which he was not allowed to graze.”

Now: All schools fall under a single, national Department of Education. “Everyone has the right to a basic education, including adult basic education,” reads the Bill of Rights.

11. Then: Reservation of Separate Amenities Act of 1953

This law stated that there should be separate facilities such as toilets, beaches and parks for different race groups. This was indicated by signs seen throughout the country. The act also stated that the quality of the amenities should be different. 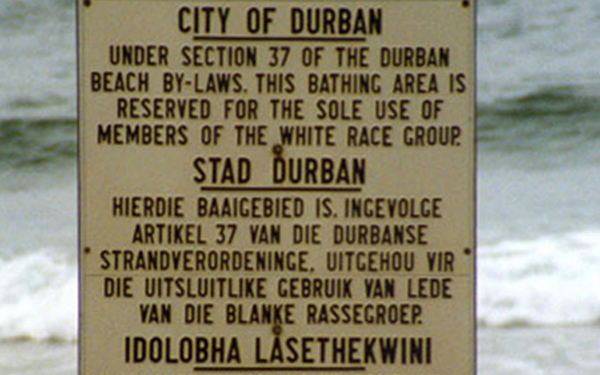 A sign in Durban, from the apartheid years, indicates the beach is for whites only. (Image: Wikipedia)

Now: South Africans are free to use any toilet, or play in any park, or swim at any beach they prefer. “Everyone has the right to freedom of movement,” states the Bill of Rights.

Now: The suburb was eventually renamed Sophiatown in 2006.

This law made it illegal for blacks to apply to courts for protection by means of an interdict, or use the legal system to protest against any apartheid law.

Now: All South Africans are able to use the legal system and everyone is equal before the law. The Bill of Rights states: “Everyone has the right to have any dispute that can be resolved by the application of law decided in a fair public hearing before a court or, where appropriate, another independent and impartial tribunal or forum.”

Gathering in public spaces was illegal if the Minister of the Justice deemed it to be an endangerment to public peace.

Now: South Africans can gather en masse, even if they are protesting against government policies, although they do need permission from the police for large gatherings. “Everyone has the right, peacefully and unarmed, to assemble, to demonstrate, to picket and to present petitions,” reads the Bill of Rights.

15. Then: Extension of University Education Act of 1959

Now: All universities are open to anyone who makes the grade and are able to pay the fees. “Everyone has the right to further education, which the state, through reasonable measures, must make progressively available and accessible,” states the Bill of Rights.

Organisations that threatened public peace were declared unlawful, which immediately affected the ANC and the Pan Africanist Congress (PAC).

Now: Everyone is free to form any organisation because the Bill of Rights ensures “everyone has the right to freedom of association”.

17. Then: Prohibition of Mixed Marriages Amendment Act of 1968

This law invalidated any marriage that took place outside South Africa between a male citizen and a woman of another race.

Now: South Africans can love and marry whomever they choose.

Black people became citizens of their homelands and were denied the right to South African citizenship.

Now: All South Africans enjoy full citizenship of the country. “No citizen may be deprived of citizenship,” states the Bill of Rights.

This law sped up the process of removing blacks from their places of residence, to a homeland. If they refused to move, they were no longer allowed to appeal the decision.

Now: South Africans are free to live anywhere in the country. “No one may be evicted from their home, or have their home demolished, without an order of court made after considering all the relevant circumstances,” reads the Bill of Rights. “No legislation may permit arbitrary evictions.”

20. Then: Newspaper and Imprint Registration Act of 1977

This meant that newspapers had to be registered and conform to a code of conduct.

Now: “Everyone has the right to freedom of expression, which includes freedom of the press and other media,” states the Bill of Rights.

The law allowed the government to declare any organisation illegal and meetings of more than 20 people were illegal unless they had received permission from a magistrate.

Now: People are free to form an organisation and meet when needed.