President Jacob Zuma has assigned three ministers to attend to the xenophobic attacks in KwaZulu-Natal, the Presidency said on Sunday.

Home Affairs Minister Malusi Gigaba, Police Minister Nathi Nhleko and State Security Minister David Mahlobo would work with the provincial government to try to put an end to the violence that had broken out in the province, spokesperson Mac Maharaj said in a statement.

“The president strongly condemns violence against foreign nationals as well as the destruction of property and the looting of shops in Durban and in any part of the Republic.

“President Zuma has emphasised that government is addressing the issues that are being raised by citizens nationally, in particular, complaints about illegal and undocumented migrants, the takeover of local shops and other businesses by foreign nationals, as well as perceptions that foreign nationals perpetrate crime.”

The attacks, which started in Isipingo on March 25, spread to other areas around Durban, including Chatsworth and Umlazi.

Ethiopian Tescma Marcus (22) died after suffering third degree burns when his spaza shop in Umlazi township outside Durban was set alight. He had been in South Africa for only four months.

His brother Alex, 24, was also burnt when a mob locked them inside the container in which they had set up their shop and torched it.

More police officers have since been sent to the area.

Zuma said all spheres of government had been directed to enforce laws and by-laws to curb illegal trading and stop the spread of unlicensed shops.

“We urge citizens to allow government to attend to these and other immigration challenges and to not take the law into their own hands,” he said.

He called on South Africans to remember that not all foreign nationals were in the country illegally, and that many contributed to the economy.

“We reiterate that there can be no justification for attacking foreign nationals. Those who are in the country illegally should be reported to the police and they will be returned to their countries of origin in a lawful manner,” Zuma said.

“Citizens should also provide information to the police if they know of foreign nationals who are engaged in criminal activities. They should not be attacked. We wish to emphasise that police will also take action against all people who engage in violence, including foreign nationals as well if they attack citizens,” he said.

He said the government would help refugees and asylum seekers in terms of international law and the country’s Constitution. 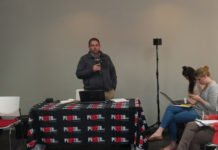 South Africans are ready for action