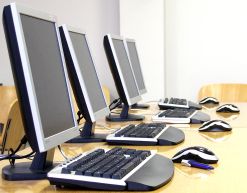 The number of internet users is expected
to double by 2014, growing as much in
the next five years as it has in the previous
15. (Image: stock.xchng)

A new report from internet research company World Wide Worx reveals that South Africa’s internet user base will double within five years – a growth rate equal to that of the last 15 years. The Internet Access in South Africa 2008 study, released in March 2009, predicts that by 2014 there will be 9-million internet users in South Africa.

Commercial internet access has been available in South Africa for only 15 years, and during that time some 4.6-million users have gone online. At the end of 2007 there were 3.8-million internet users, about 8% of the population. The jump to over 4-million represents a growth rate of 12.5%, and is the first time since 2001 that growth of more than 8% has been achieved.

World Wide Worx says that after five years this number will have doubled, and MD Arthur Goldstuck attributes the increase to four driving factors.

The Seacom undersea cable, due to become operation in June 2009, is the first factor. The cable will dramatically increase bandwidth in Southern and East Africa and, says Goldstuck, will also bring down the cost of bandwidth in the region. South Africans pay much higher fees for their connectivity than other nations, but with the arrival of Seacom, and other undersea cables in development, this situation will ease – although not overnight.

The next factor is the decision by the Independent Communications Authority of South Africa to issue electronic communications network services licences (ECNS) to internet service providers. This means that service providers will be able to build their own networks and use their own infrastructure. In spite of government resistance, providers have won a hard-fought battle to see the introduction of the ECNS licence, even taking the Department of Communications to court in their quest.

Goldstuck does not anticipate even a tenth of the existing 600 service providers to leap to the challenge, but, he says, “enough of them will emerge from under the radar to give consumers and business a new world of choice.”

These companies will have the Seacom cable to help them deliver an affordable and efficient service, allowing the new generation of service providers to introduce business models that were never possible before.

Then, there is the fact that many small and medium enterprises (SMEs) are embracing ADSL and leaving their obsolete dial-up technology behind. Goldstuck’s research has shown that these smaller companies are now the major driving force behind internet access in South Africa, as up to 20 individuals are able to connect to the web for every SME.

Finally, there is the new development of internet access via mobile phones, a phenomenon that is growing steadily but still has some way to go. “We will need to see great improvements in both usability and people’s ability to use advanced features on their cell phones,” says Goldstuck, “and that will take another few years.”

The latest figures show that at the end of 2008 roughly 10.5% of all South Africans, or 4.6-million people out of a population of 43.79-million, had access to the internet.

South Africa has lagged behind the rest of the world especially in the implementation of broadband, but with the popularity of dial-up connectivity dropping fast, broadband is finally set to take over. This is influenced in no small part by the advent of the Seacom undersea cable, and other similar projects.

Broadband subscriptions increased by 60% during 2008, jumping from 818 000 in 2007 to a new high of 1 308 000. This is good news for business collaboration and personal interaction, says Goldstuck. “Broadband has not yet made a major impact on overall connectivity numbers, even while dramatically increasing the usage of those who are already connected.”

Another important trend is the steady migration to wireless broadband, whereas before the land-based ADSL service from communications provider Telkom was the main choice of users switching to broadband. In 2008 wireless broadband subscriptions overtook that of ADSL, and the numbers now read 750 000 to 558 000.

News and information portals remain the most popular locally-run sites. News24 and MSN are at the top of the table, followed by MWEB. The localised website of search engine Google and social networking platform Facebook are the top two internationally-accessed sites.

An area where South Africa is leading the rest of the world is in online advertising, which saw a massive growth in revenue of 32%, following an equally impressive 27% in 2007.

The 2008 study also showed that there is only one other mature internet market that shows more growth in online advertising, and that is Brazil, where growth during 2008 reached 45%.

Other English-speaking markets which traditionally had outpaced South Africa in 2006 and 2007, such as the US, UK, Canada and Australia, declined during in 2008. None managed to achieve 30% growth – growth in the US was a slim 11% while in the UK growth fell to 22%. Neither country is expected to break through 10% in 2009.

Blogging on the rise

The blogosphere, as the growing assortment of South African blogs is known, is also fast expanding. There were a total of 26 197 blogs in South Africa at the end of December 2007, compared with 25 037 blogs just four months before.

The number of active blogs – that is, blogs updated at intervals of no longer than two weeks – was 3 789, representing 14.5% of all South African blogs.

Since 2007, which saw the launch of several related services such as blog aggregator Afrigator, the trend of blogging has evolved from a fad to something more serious, says Goldstuck.

According to Afrigator, South Africa dominates the African blog space, with nearly three in every five blogs attributable to the country.