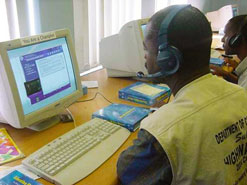 A report on the progress of Unesco‘s science journalism initiative, launched in 2008 to develop a post-graduate curriculum in science, health and environmental reporting, has emerged after a recent meeting in Pretoria.

Representatives of the Tshwane University of Technology, the Polytechnic of Namibia and Uganda’s Makerere University met in Pretoria, South Africa, to discuss the progress made in the development of a science journalism curriculum for Africa.

Since 2008 a wide consultation has been taking place with role players in schools of journalism and industry, with Unesco’s Model Curricula for Journalism Education as a basis for the compilation of the curriculum.

The one-day meeting in Pretoria, funded by Unesco, focused on the format of the future curriculum and the subjects to be included in it. It also considered the nomenclature, which is of the utmost importance in any curriculum.

The impact of modern technologies and globalisation make it imperative for journalists to successfully communicate relevant messages on science, health and environment in a rapidly developing Africa.

This can be achieved by designing a specialised journalism curriculum that would convey applied knowledge through professional pedagogical approaches.

In 2007 the Journalism Departments at Tshwane University in Pretoria, at Makerere University in Kampala and at the Polytechnic of Namibia in Windhoek were identified in a Unesco-commissioned study as potential centres of excellence in journalism training in Africa.

The following year a proposal was submitted to the American Embassy in Pretoria to grant these three African academic institutions the opportunity to acquire first-hand information on science reporting. The main purpose of this proposal was assisting the three top African journalism schools in the development of a post-graduate curriculum in science, health and environmental reporting.

Such a curriculum would be offered for approximately one year and would develop into a master’s degree in journalism, incorporating science-related specialisation. The ultimate goal of this initiative is to establish a chair in science journalism for Africa, which would operate on a rotational basis in different countries in order to be truly representative of the continent.

The Report on Progress Regarding the Science Journalism Curriculum is available for download (PDF, 99Kb).