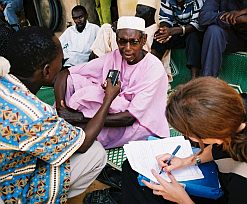 Unesco and the AU are to develop the
genre of science journalism in Africa over
the next three years. (Image: Unesco)

The United Nations Educational, Scientific and Cultural Organisation (Unesco) and the African Union (AU) Commission have signed a special agreement to strengthen journalism in Africa, particularly in science and technology.

The special agreement will see the two organisations working together to enhance the skills of African journalists and other media professionals in a series of initiatives across the continent and internationally.

The agreement is expected to improve the quality of African journalism in general, and science and technology reporting in particular.

Beninese mathematician Jean-Pierre Ezin, the AU’s commissioner for human resources in science and technology, and Unesco’s assistant director-general for communication and information, Abdul Waheed Khan, signed on the line in Paris on 8 July, bringing the agreement into immediate force.

The two organisations have also agreed to meet at least once a year to consult on and assess the programme. An action plan is expected within six months of the signing.

Unesco and the AU have identified a number of priority areas for collaboration. These include knowledge sharing; the evaluation of previous similar initiatives; the implementation of capacity building programmes; and the joint financing of projects and possible involvement of other partners.

In 2007 Unesco undertook a study to identify and document the capacity of 96 journalism schools across Africa. Emphasis was placed on those schools that showed real potential to be so-called centres of excellence.

The project was conducted with the help of the School of Journalism and Media Studies at Rhodes University in South Africa’s Eastern Cape province, and the ESJ International School of Journalism in Lille, France. Media organisations around the continent also added their expertise.

A comprehensive list of the participating schools was assembled in a database, which is accessible on the Unesco website. Under the new special agreement, the schools involved will be enlisted as training venues.

Science journalism on the rise

With the increasing realisation of the importance of technology in the growth of the African continent comes a parallel awareness of the need for quality journalism, especially in the field of science. Science journalism is a relatively new speciality, but a growing one.

At an assembly of science journalists earlier in 2009, it was revealed that the genre is flourishing in developing nations, while at the same time diminishing in some developed countries.

Delegates at the 2009 meeting of the American Association for the Advancement of Science, held in February in Chicago, heard of a growing demand for science stories from both editors and readers in Africa and the Middle East. But in the US, media houses have cut back on their science reporters and some have even done away with their science departments altogether.

Akin Jimoh of the Lagos-based Development Communications Network said that the developing world’s scientific loss was Africa’s gain. “Science journalism is growing [in Africa],” he commented. “Associations of science journalists are being formed in a number of countries. They have organised conferences in their countries to influence science policy.”

Other reasons given at the recent Chicago gathering for the rise of science journalism included greater interest from the media in promoting science as a development tool, and the increased attention to issues of global interest, such as climate change.

But in other more developed countries, the story has taken a different turn. US-based television network CNN is reported to have shut down its entire environmental, science and technology unit, while the respected Boston Globe publication is phasing out its science section over the course of a year.

The Cairo bidding group fought off fierce competition from Finland, Uganda and Kenya to snatch the privilege of hosting the prestigious gathering. The Finnish Broadcasting Company’s Pirjo Koskinen was disappointed, but conceded that it was fitting that a developing country should next host the conference. “It’s very important for us to get to know Africa,” she added.

Announcing the winning bid in June 2009, outgoing WFSJ president Pallab Ghosh expressed delight that Africa had been so strongly represented in the bidding process.

Ghosh is succeeded as WFSJ president by Cairo-based Nadia El-Awady, a co-founder and past president of the Arab Science Journalists Association.