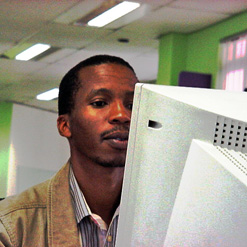 Translate.org.za is a non-profit organisation that translates free open source software, such as internet browser Firefox and e-mail client Thunderbird, into South Africa’s 11 official languages. Two of the company’s products have been selected for internet search engine Google’s Summer of Code 2008.

The Summer of Code is a collaborative programme that brings together students and mentors from 90 countries around the world to work during the US summer holidays on free open source software products, enhancing and modifying them. Open source software can be freely modified, since the underlying code has been made available to users by the developers.

Products are provided by selected mentoring organisations. Students then evaluate the products and choose those which match their skills and interests. They submit an application to work on their product of choice and if accepted, receive a stipend for their work. Applications from students may be submitted to Google from 24 March 2008.

The two Translate.org.za products are Translate Toolkit and Pootle, both of which assist in language translation and localisation.

Translate Toolkit is a set of tools that enables programmers to switch between various translation formats (such as OpenOffice.org formats and Mozilla formats). This simplifies the work because only one translation editor is needed for a variety of applications.

Pootle is a set of online translation and translation management tools. The web interface is translated into more than 35 languages, and translations of the interface are updated live. Both projects are written in the Python programming language.

Established in 2001, Translate.org.za aims to empower South Africans by providing useful open source software in their mother tongue. The company believes that its solutions not only promote indigenous languages and provide practical interventions, but that they also encourage other software vendors to play a more active role in adapting their products to the requirements of those who do not speak English as a home language.

According to Dwayne Bailey, director of Translate.org.za, about 80% of South Africa’s population is not fluent in English, and therefore the work is important because it allows everyone access to technology.

The organisation has notched up some notable achievements in recent years. These include the translation of Firefox and Thunderbird into all 11 official South African languages, the release of the first free Afrikaans spell checker, translation of parts of the Red Hat distribution of Linux into Afrikaans, Pedi (Northern Sotho) and Zulu, and the release of free office suite OpenOffice.org in the 11 official languages.

Translate.org.za has also created South Africa’s first multilingual keyboard that can display the special characters needed by the Venda, Afrikaans, Pedi and Tswana languages, as well as the DejaVu font for Venda.

The organisation has garnered numerous awards for its achievements. In 2006 it won an African ICT Achiever Award for helping to make essential software accessible to more people in Africa. These awards are endorsed by the New Partnership for Africa’s Development and were established to reward individuals and organisations that have made a difference to the ICT industry in Africa.

Translate.org.za also received a Pan South African Language Board award in 2007. The board promotes the equal use and enjoyment of all the official languages of South Africa. The “Multilingualism and Nation Building: eBusiness Institution of the Decade” award celebrates not only Translate.org.za’s accomplishments but also its ongoing work with universities in training students to translate software through its Translate@thon programme.

The Translate@thon is a one-day translation drive held at tertiary education institutes where students and staff work intensively on translation of software.

The first Translate@thon took place in 2004 at the University of Cape Town. Students and staff translated the OpenOffice.org glossary into Xhosa. A follow-up event in 2005 resulted in a fully translated version of Firefox in Xhosa.

The Translate.org.za team also worked in 2005 with staff and students from the Durban Institute of Technology and the University of KwaZulu-Natal to translate Firefox into Zulu.

The most recent Translate@thon was held in May 2007 at Rhodes University in the Eastern Cape on translating the campus email system into Xhosa. All work was done using Pootle.