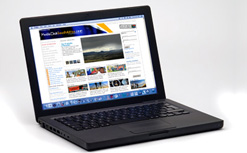 The country has 5.3-million personal computer users, making up 11% of the total population. Its online market is dominated by information and social networking websites, according to web information company Alexa, which lists Google.co.za as the top site, followed by Facebook.

The top web brand in South Africa is News24, followed by MSN.

This is according to Internet Access in South Africa 2008, a report released in March 2008 by World Wide Worx, South Africa’s most authoritative electronic communication research company.

Fixed-line dial-up connection has long been the most-used form of internet access in South Africa, which has lagged behind more developed countries’ uptake of broadband.

“Once everyone who is connected is on broadband or high-speed networks, the Internet will come into its own as an environment for business collaboration and personal interaction,” says World Wide Worx managing director Arthur Goldstuck.

“Broadband has not yet made a major impact on overall connectivity numbers, even while dramatically increasing the usage of those who are already connected,” adds Goldstuck, who has been tracking the internet market since 1993. “The majority of broadband users are simply migrating up the connectivity food chain, from dial-up to broadband.”

Telkom’s ADSL offering has been the main driver of broadband adoption in South Africa for the last four years, but has been overtaken by wireless broadband subscriptions, which now outnumber ADSL by 750 000 to 558 000 in 2008. World Wide Worx predicts that ADSL will continue to be the principal form of connectivity for most broadband users until the latter part of 2009.

The study shows that the only broadband offering attracting large numbers of new users, rather than upgrading existing users, is iBurst. Until now the growth of iBurst has been held back by availability, but through its relationship with Vodacom it is expected to make a dramatic impact over the next two years.

According to Nielsens Netratings research, published by the Online Publishers’ Association, the user base is becoming more male-dominated, with 58% of South Africans online in December 2008 being male, as opposed to 55% in December 2007. This represents an increase of 3.2%.

The audience is also ageing slightly, with the older demographic groups increasing their share the most; with a 0.6% increase, the 50+ group saw the greatest increase.

South Africa has 5.3-million personal computer (PC) users, or 11% in a population of 47.85-million – one computer for every nine people.

This is according to PC Users in South Africa 2006 , a study released in June 2006 by World Wide Worx.

The study was conducted by Arthur Goldstuck and Kirsty Laschinger. Its approach was to move beyond a conventional tally of computer sales to establish how long PCs, laptops and servers remain in use once they have entered the market, and how many are in active use. For the first time, this has provided a clear picture of the size of South Africa’s PC user base.

“PCs have a life span ranging three to six years, while laptop computers tend to be used for only up to three years,” says Laschinger, who interviewed most of the country’s major PC manufacturers and distributors for the project.

“It was an eye-opener how many vendors of computers expect all users to replace their PCs every two to three years, when the reality is many users ‘sweating their assets’ to get maximum value from the purchase.”

Booming sales in PCs mean not only more people using new computers, but also that PCs already in the field remain in use for a longer period, further boosting the user base. But this trend may change once laptop computers overtake desktop PCs in popularity – a real possibility in the next few years.

“Laptop computers cannot be upgraded as easily or as cheaply as desktop PCs, so they have a shorter useful life,” says Goldstuck. “You can upgrade a PC bought more than five years ago to accommodate current software, but it’s unlikely you could do that with most laptops. The result is that old laptops are more likely to be discarded than passed on, while old PCs are more likely to have a second life once the user upgrades.”

The net result is that booming laptop sales will not have the same cumulative effect on the total user base as do PC sales. Nevertheless, growth will continue, but at a slower pace, in the years to come.

Factors that will drive this growth include:

Membership is restricted to internet publishers who:

According to the OPA, in the second quarter (April to June) of 2007 the top 20 websites in South Africa were:

Online advertising in South Africa grew at the fastest rate of all countries in the English-language world in 2008, and is likely to repeat this performance in 2009. This is according to the Online Media in South Africa 2009 study, conducted by World Wide Worx in collaboration with the OPA.

Another interesting trend that has emerged, is that online advertising spend is set to overtake that of the cinema. The growth forecast for 2009 is 32% for online, while advertising growth in cinema will show very little movement.

“While online economics in South Africa are different to those of traditional commerce, there is little doubt that a recession in the physical world would make itself felt in the online environment, but the 2009 expectation shows how robust this sector remains,” says Goldstuck.

The 2008 study also showed that the only other mature Internet market where online advertising appears to be growing faster than South Africa is Brazil. The South American country shows a massive 45% growth for 2008.

Other English-speaking markets which traditionally had outpaced South Africa in 2006 and 2007, such as the US, UK, Canada and Australia, declined during in 2008. None managed to achieve 30% growth – growth in the US was a meagre 11% and in the UK growth fell to 22%. Neither country is expected to break through 10% in 2009.

Rich media banners – ads that allow the user to interact with them – share top position with the static banner in terms of revenue generating advertising in South Africa.

The total spent on online retail goods in South Africa in 2007 is expected to be R929-million, up from R688-million in 2006, according to Online Retail in South Africa 2007 , a report released by World Wide Worx in October 2007.

These figures exclude the sale of air tickets online, which continue to dwarf the numbers for online retail. The five South African airlines selling tickets online, namely kulula.com, FlySAA.com, Mango, and 1Time between them accounted for R2.3-billion in e-commerce in 2006, almost four times the size of conventional online retail. The figure is expected to rise above R3-billion in 2007.

These numbers indicate a dramatic turnaround in online retail in South Africa, which appeared to be stagnating in 2005. The 2006 recovery is being sustained in 2007, with all indications being of even more dramatic growth in 2008.

The online retail market is dominated by 12 sites, which between them account for more than three quarters of online retail sales in South Africa, according to World Wide Worx. They are:

World Wide Worx research shows that for the period of January to March 2008, the following activity was reported on South African blogs:

The key moments, says Goldstuck happened in 2007, and they were the launches of Afrigator, the continent’s first blogging aggregator; Amatomu, the first comprehensive tracking service for blogs and bloggers in South Africa; My Digital Life by ITWeb, which put solid commercial resources and interests behind blogging; and The Times, the first mainstream newspaper to embrace blogs and the social networking environment.

As a result, he adds, it is clear that blogging is no longer just a fad, as indicated by the explosion of activity that occurred in July and August 2007. This represents a true tipping point for the phenomenon.

According to Afrigator, South Africa dominates the African blog space, with nearly three in every five blogs attributable to the country.