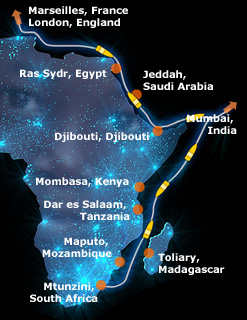 Starting from France and England, the
Seacom cable runs across the
Mediterranean and Red Sea, around the
Horn of Africa, and then down the African
east coast to make its final landfall at
Mtunzini in South Africa’s KwaZulu-Natal
province. Along the way it connects to
land stations in Egypt, Saudi Arabia,
Djibouti, Kenya, Tanzania, Madagascar
and Mozambique.
(Image: Seacom)

After years of anticipation, broadband internet connectivity in Africa is set to boom as the 15 000km Seacom undersea fibre-optic cable connecting the continent to Europe, the Middle East and Asia has finally come onstream.

The cable, which went live on 23 July, is now the second of its kind linking South Africa to the world, and a boon for the country’s information technology infrastructure, benefiting consumers and business, and stimulating economic growth.

Laid at a reported total cost of R5-billion (US$ 637-million), the Seacom cable is also the first of its kind to connect East Africa to the internet.

Starting from France and England it runs across the Mediterranean and Red Sea, around the Horn of Africa, and then down the African east coast to make its final landfall at Mtunzini in South Africa’s KwaZulu-Natal province. Along the way it connects to land stations in Egypt, Saudi Arabia, Djibouti, Kenya, Tanzania, Madagascar and Mozambique.

At the Horn of Africa, on the coast of Somalia, the cable also branches off to head for Mumbai in India. In April and May this year Somali pirate activity disrupted Seacom operations, delaying the launch by about a month.

The cable will not only speed up internet access for South African users, it will also cut costs. Stephen Davies, chief technology officer of telecommunications service provider Connection Telecom, said this cost-saving will apply to both fixed-line and mobile internet users.

Rob Gilmour, managing director of RSA Web, agreed that these benefits would change the way South Africans interact with the internet. “Seacom is incredibly exciting for the South African internet landscape. Bandwidth prices have been monopolised in South Africa and, with only one undersea cable at present, consumers are being held by a stranglehold.”

Gilmour said South Africans won’t experience real savings immediately, but consumers won’t have to wait too long before they can cheaply access media-rich applications such as audio and video.

“Consumers will change from limited web browsing and checking email to enjoying more internet content,” he said. “They will spend more time on the internet and not have to be so cautious about what they do.”

Money on the net

Matthew Tagg, managing director of internet service provider Web Africa, predicts that the higher bandwidth provided by Seacom will encourage the increased commercialisation of the South African internet. He said a report released at the recent Internet Governance Forum indicates that South Africa has fallen way behind its African counterparts in terms of “internet adoption rates”.

In 2000, the country had 2.4-million subscribers, representing 53% of internet users across the continent. In 2009, South Africa made up only 9% of Africa’s total internet subscriber base, with 5.1-million users.

Tagg said South Africa would be able to reverse this trend in a deregulated market with an excess of cheap international bandwidth. Provided that the licensing costs currently under discussion are not too high, this development could radically increase internet penetration rates.

“The internet will start to become a utility just like any other,” he said. According to Tagg, the market’s current complexity of product and service offers will disappear. And consumers will be able to participate in online gaming, check email or download videos more easily.

“They will not need to check if their connection supports this functionality, or go through the hassle of switching to another product,” he said. “They will be automatically connected to any and all services the Internet has to offer.”

According to Gilmour, South African business would also benefit. The international community already viewed South Africa as the hub of Africa in many areas, he said, and improved internet infrastructure could only enhance the country’s status.

“For a country at the bottom tip of Africa this is great news and will allow us to compete globally like never before. South Africa is more and more becoming the IT hub of Africa and cables and initiatives like this further enhance this reality.”

Davies agreed that the country’s reputation for business would be enhanced. “There is now no reason why African and international businesses should not look to South Africa for business opportunities and investment ventures.”

Trade Invest SA has reported that the business process outsourcing (BPO) sector – call centres and the like – had been calling for cheaper telecommunications costs for some time, as the high cost of telecoms is a deterrent to potential investors.

Some operators claimed that telecommunications could be as much as 500% more expensive in South Africa than in other emerging countries in the BPO sector, making the country far less attractive. In a media report, Ajay Pandey, managing director of Neotel, the country’s second national operator, said the launch of Seacom – as well as other cables such as WACS and EASSy – could start a “new wave” of growth in the IT and BPO industries.

Cheaper telecoms costs will have a profound impact on the South African economy and infrastructure development. Davies pointed out that the major driving force behind global economic growth is new technologies, particularly those that provide innovation and stimulate development.

A new World Bank report, Information and Communications for Development 2009: Extending Reach and Increasing Impact, confirms that broadband capacity boosts economic growth. It argues that every 10% increase in high-speed internet connections in developing countries leads to a 1.3% increase in economic growth.

The report also claims that access to ICT services is vital for economic and social development of sub-Saharan Africa. The World Bank has already cited that capacity is one of the biggest constraints holding back the region’s development of broadband connectivity.

Davies agreed that there is a correlation between broadband growth and economic development. With the new cables, South Africa will be in a position to take advantage of innovation and local production. This will in turn contribute to growth of the country’s GDP, help new businesses establish itself, and stimulate the infrastructure development needed for public and private initiatives.

He pointed out that a lot of the continent’s current internet traffic is dependent on expensive satellite connections, due to the lack of fixed-line infrastructure. But with new undersea cables under construction or in the planning process, the continent’s predicament may well change.

“Between African governments and private companies wanting to invest in the continent, billions of rands have been allocated to the various undersea cable projects to get the continent’s broadband up to par,” Davies said. There is even market speculation that once these projects are complete, Africa will have an excess of bandwidth capacity – a positive boost for business, infrastructure and ultimately the economy.

But he warned that these benefits were also dependent on the regulatory environment. “The undersea cables will provide the necessary means for increased bandwidth. The deciding factor, however, will be the way in which these cables are managed and regulated.”