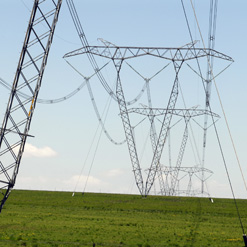 Eskom electricity pylons march across the
landscape in KwaZulu-Natal. The game
Save It! is part of the government’s
national energy efficiency campaign,
launched in 2008.
(Image: Graeme Williams,
MediaClubSouthAfrica.com. For more free
photos, visit the image library)

South African children are learning early about the benefits of saving electricity, and having fun at the same time, thanks to a new internet- and mobile-based game distributed and promoted by the national Department of Energy.

Save It! – which teaches children about energy efficiency in the home – was launched by Minister of Energy Dipuo Peters at the Tygerkloof Combined School in Vryburg, North West province, during August 2009.

The game, designed and developed by Johannesburg-based Airgames, is part of government’s national energy efficiency campaign implemented in 2008 to deal with energy supply problems in the wake of the power crisis of late 2007 and early 2008.

The campaign centres on energy demand management, which is driven by national power utility Eskom and seeks to influence the pattern of end-usage, thereby helping consumers to use their energy more efficiently and save costs.

The energy department has taken the logical step of reaching out to youngsters on a platform they can easily access and relate to – gaming and social media.

At the Vryburg launch Peters said her department was excited with the development, as it used new media to connect with today’s techno-savvy generation.

“Reaching the hearts and minds of South Africans starts with reaching the youth,” she said. “We hope that they will take what they have learnt into their homes, their schools and, ultimately, into the future.”

Young gamers can play Save It! on their mobile phones or computers. A web browser is all that’s needed for the computer. On phones, users must first install the MXit instant messaging and chat application – although given MXit’s popularity among South African teenagers, chances are good they will have it already.

MXit was developed in South Africa and is now used in over 120 countries around the world. It currently has over 14-million users, most of them in South Africa. With 25 000 users signing up every day, MXit is one of the largest mobile communities in the world.

MXit is keen to demonstrate its usefulness as more than just a chat room and messaging service. The company has come in for some criticism especially with regard to the safety of its young users, but has recently made a number of improvements, such as implementing stricter rules with regard to personal behaviour, profanity filers and moderation in chat rooms, and a facility that enables users to ban others they consider troublesome.

Media analyst Arthur Goldstuck applauded the Save It! idea, but added the department was missing out on a large portion of its target audience because primary schoolchildren do not use MXit as extensively as their high school fellows.

“The initiative is visionary in that it tries to talk to children where they are, rather than trying to attract them to a government portal, which would seem an alien environment to them,” Goldstuck said.

In the game children play as one of three superheroes – Captain Watt and his trusty sidekicks Dyna-Mo and Miss X-Static – to fight against the evil Energy Guzzler, the monster that is using all the electricity in their homes. Their mission is to save as much electricity as they can in the home while outmanoeuvring the wasteful Guzzler, who is bent on undoing the hard work.

After each action, for example, switching off a light, players get a pop-up explanation of the benefit to the environment and the electricity bill. In this way the eco-friendly message is reinforced. At the end of the game they can submit their score via e-mail and compare themselves with other players.

Save It! is available as a free download through MXit Tradepost, the application’s e-commerce section. Users can also play online for free on the national energy efficiency campaign’s website.