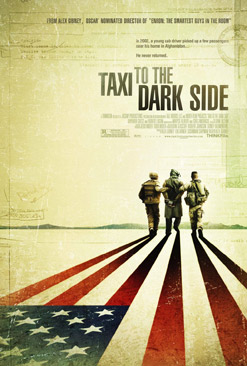 Previous South African Oscar laureates include Charlize Theron, who won best actress in 2004 for her searing portrayal of Aileen Wournos – executed in 2002 for murdering six men – in Monster. South African film Tsotsi won best foreign-language film in 2006, while Yesterday was nominated for the award in 2005.

Taxi to the Dark Side is part of the global documentary project Why Democracy?, initiated in 2005 with the aim of using film to start a global conversation about democracy. Executive-produced by Edkins and written, directed and narrated by Alex Gibney, it deals with US treatment of prisoners. In 2007 it won the best documentary prize at its premiere at the 2007 Tribeca film festival in New York, and again at the Chicago international film festival.

“I am very pleased that Taxi to the Dark Side won because it deals with a very tough political issue,” the South African filmmaker said at the award ceremony. “By awarding the film an Oscar, the Academy has showed it is not scared of films which expose the undemocratic practices of the American government.”

Also in the final race for the Oscar was Please Vote for Me by Weijun Chen, another Why Democracy? film produced by Edkins. The film is about an experiment in democracy in China, where eight-year old schoolchildren in Wuhan, central China, campaign for the position of class monitor.

Edkins is the producer and co-ordinator of Why Democracy? which is run by Cape Town-based Steps International. This is a non-profit organisation established by the founders of Steps for the Future, itself an anthology of 38 HIV/Aids-focused films from seven different Southern African countries. The latter project’s patron is veteran South African singer and activist Miriam Makeba.

Consisting of 10 one-hour documentaries and 18 short films, Why Democracy? had its first global broadcast in October 2007 – partnered locally by the South African Broadcasting Corporation. The estimated audience was 300 million worldwide.

Project contributors included independent award-winning filmmakers from around the world, including China, India, Japan, Liberia, USA, Bolivia, Denmark, Afghanistan, Egypt, Pakistan and Russia, with subjects ranging from US torture methods to the current state of politics in Russia, to the scandal around Islamic cartoons in a Danish provincial newspaper.

Spending time in the shadows

Taxi to the Dark Side, which took about 18 months to make, deals with the death of Dilawar, a young Afghan taxi driver who died in 2002 from injuries inflicted by US soldiers while in detention. The first part of the title refers to the victim, and the second part is taken from a quote by US vice president Dick Cheney, who said on television that the fight against Islamic extremism will involve working “the dark side, if you will. We’re going to spend time in the shadows”.

In a February 2008 radio interview, writer and narrator Gibney said the taxi driver was apprehended and taken to Bagram air base, a US military facility in northeast Afghanistan. Five days later he was dead.

“He was accused of being involved in a rocket attack against an American base,” Gibney said. “In fact, later on, it was learned that the very people who arrested him were responsible for that attack.”

Dilawar was never formally charged with any crime, and was never shown to have any connection with Al Qaeda or the Taliban.

The hard-hitting film features interviews with a fellow prisoner, reporters, historians, legal experts and US military personnel of both junior and senior ranks. The soldiers interviewed were interrogators and military police stationed at Bagram, and Gibney skilfully manages to convey not only the horror of the incident but also the difficult situation that enlisted soldiers, who were just obeying orders, found themselves in.

“They were told that the rules, the old rules that used to apply, the Geneva Conventions, are no longer in effect,” he said. “This was in Afghanistan. And there were a number of rules coming out of the Department of Justice through the Office of Legal Counsel that tried to indicate that perhaps in Afghanistan the rules no longer applied.

“So in the field, the message was clear: the gloves are off, do whatever you need to do to get information. And a lot of military people were deeply upset by this, because there are, you know, very clear rules and guidelines that the military has in place in order to forestall and prevent these kind of abuses that we’ve seen, but the administration, the civilian administration, was taking a very different attitude toward these rules and regulations. “

Gibney said he felt vindicated when hearing of the film’s nomination, because it was a difficult piece to make.