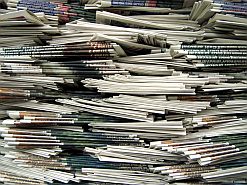 The South African National Editors’ Forum (Sanef) held its annual general meeting in Durban, KwaZulu-Natal, in June. Looking to the decade ahead, the theme of the event was “Journalism – The next 10 years”.

Keynote speaker Jacob Zuma, South Africa’s president, lauded the country’s journalists for their important role in the strengthening of democracy and the promotion of human rights, even as they deal with significant industry-related challenges such as transformation.

“These rights include freedom of expression, which is not merely about protecting citizens from state censorship,” said Zuma. “It is also about ensuring that citizens have the means to exercise this right.”

All citizens should be able to freely express themselves through the media, said Zuma. He stressed that the media also has an obligation to constantly inform the public – especially the poor – about their rights and responsibilities. He also reminded those present to continue to strive for the attainment of gender equality in the industry in the years to come.

The Sanef meeting identified two concerns that must be dealt with if the media is to continue providing credible and newsworthy information in the years to come. Firstly, there must be no imposition of limitations whatsoever on journalists. Secondly, media houses cannot afford to ignore the threat to print publications posed by the advent of the digital age.

The meeting focused on various obstacles to media freedom. Within South Africa, Sanef specifically pointed out an increasingly arduous process in obtaining media accreditation from certain organisations and PR companies, and the ongoing refusal of Tito Mboweni, the Reserve Bank governor, to let photographers take pictures of him at briefings.

The group resolved to oppose and overcome these developments, and also discussed recent violations to press freedom in other notoriously restrictive countries on the African continent.

Sanef expressed its “deep concern” over the ongoing instability at the national broadcaster South African Broadcasting Corporation (SABC). In recent weeks the SABC has taken a number of body blows in the form of top-level resignations, revelations of long-overdue debt and mismanagement of funds, and a general drop in credibility on all fronts.

Sanef appealed to those in authority to urgently put in place a new governing structure. The SABC is owned by the state and its governing board is appointed in Parliament. Only the country’s president may appoint the chair and deputies.

Zuma assured the group that he, too, was monitoring the situation and was ready to take the necessary steps once Parliament has concluded its investigation and decided on the right way forward.

“In the midst of the challenges facing the public broadcaster,” said Zuma, “there is still a sizable group of journalists within the institution who undertake their daily work with diligence and integrity.”

The president commended those journalists and editors who did their best to keep South Africans reliably informed, often under difficult professional conditions.

The annual Nat Nakasa award ceremony, given in honour of the late journalist, took place on the same evening. The awards, which honour courageous journalism, are a tribute to the gutsy 1960s activist who fought against the regime of the time for press freedom and a wider platform for black voices.

In 1964 Nakasa went into exile to study journalism at Harvard under a Niemann Fellowship, and died by his own hand at the age of 28.

“The Nat Nakasa award reminds us that we don’t just need a free media,” commented Zuma. “We want and need a quality media. As a country we need journalists who are dedicated to their craft and to their audience.”

The 2009 Nakasa award was bestowed on South African-born photographer Greg Marinovich, a filmmaker, Pulitzer Prize winner and member of the Bang Bang Club. Marinovich has worked in conflict situations in South Africa, Afghanistan, Bosnia, Chechnya, Rwanda, Uganda, Sierra Leone, Israel, Palestine and others. He is the former picture editor of the Sunday Times, and now works as a freelancer.

Another prestigious award was awarded on the night. The Sanef-Wrottesley award is awarded to a journalist who shows outstanding dedication in working towards Sanef’s goals. The winner is chosen by his or her peers. Former City Press and Sunday Times editor Mathatha Tsedu, now head of media giant Media24’s journalism academy, walked off with the award for 2009.

Sanef arose out of a 1996 meeting of the Black Editors’ Forum and the Conference of Editors. The two groups merged to form the non-profit, non-racial organisation that now works to overcome various forms of prejudice in the industry and uphold the principles of ethical journalism and freedom of the press. It was launched on 19 October 1996, Press Freedom Day.

“We have at last arrived at the creation of a united forum of editors,” said then-president Thabo Mbeki on that occasion, “and therefore, in practical terms, put down another foundation stone on which we will build the non-racial edifice which we all wish to see.”

Today Sanef comprises senior journalists, editors and trainers from all over the country and from all media genres, working together for a free South African press.