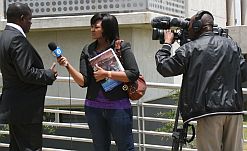 The South African Depression and Anxiety Group (Sadag) has announced it will hold the country’s first mental-health reporting seminar for journalists – an initiative to break the stigma associated with psychiatric conditions and help newsrooms cover such matters with greater sensitivity.

Thirty-six local journalists have been selected to attend the seminar as trainees. They include print, broadcast and online reporters from across South Africa, according to Sadag.

The Sadag seminar will run from 4 to 5 April 2011 in Johannesburg. The NGO said this upcoming event is the “first of its kind ever in South Africa”.

“During the two-day training, the journalists will further understand depression, bipolar, panic attacks, admitting patients to hospital, obsessive-compulsive disorder, and the challenges of reporting on such sensitive issues in an informed manner,” Sadag founder and director Zane Wilson said.

Sadag added that the seminar is a continuation of the Rosalynn Carter Fellowships for Mental Health Journalism that were granted to 12 South African reporters each year for the last six years.

Many of the South African fellowship recipients have travelled to the US over the years to share their research and work with contemporaries from around the world. “These journalists have benefited from the fellowships, visiting the Carter Centre and bringing back invaluable reporting skills in this specialised field,” said Sadag.

When the fellowships were available to South African applicants, Sadag helped select appropriate candidates. But this year, only journalists from the US and Romania can apply.

An initiative of Rosalynn Carter, wife of former US president Jimmy Carter, the training forms part of an international effort to destigmatise mental illnesses.

Until now, formal training in mental-health journalism has basically been non-existent in South Africa. Unlike priority specialisations such as political or financial journalism, mental health is a niche subject that’s often overlooked.

Sadag at the forefront

Sadag, one of the leading NGOs in the country, has been at the forefront of mental health awareness and offering help to mentally ill patients and their families since its founding more than 15 years ago.

“The South African Depression and Anxiety Group makes it a top priority to ensure that people have a clear understanding of issues regarding mental health,” said Wilson.

Its crisis lines, which include specialised help for people considering suicide, receive about 400 calls a day. Sadag said its phone bill amounts to R60 000 (US$8 900) every month. It is currently appealing for donations.