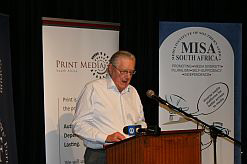 Raymond Louw, Sanef chairperson, was one of the
speakers at the South African Media Freedom Day
celebration.
(Image: Bongani Nkosi)

South Africa’s media enjoys a robust press freedom, and can rely on the protection of the Constitution (PDF, 517 KB) whenever threats to that freedom appear. This was the main message of the Media Freedom Day celebration, held in Johannesburg on 19 October.

The day commemorates Black Wednesday, 19 October 1977, when the apartheid government clamped down on the press in the turbulent aftermath of the 16 June 1976 Soweto uprising. Many political journalists were arrested and their newspapers banned.

“Today our freedom is defended by the Constitution,” press ombudsman Joe Thloloe said at the celebration. “We should not become paranoiac, we should go to our Constitution.”

Media Freedom Day was jointly organised by the South African National Editors’ Forum (Sanef), the Media Institute of South Africa, the Instutute for the Advancement of Journalism and Freedom of Expression Institute, among others.

South Africa’s press has expressed concern recently that parliament’s proposed Films and Publications Act and the Protection of Personal Information Bill poses a major threat to its freedom.

The government maintains that the law is designed to combat child pornography, but the press opposes the requisite that they will have to submit their material to a committee before print.

Also under discussion was the media tribunal proposed by the African National Congress (ANC), the governing party, at its 2007 Polokwane elective conference. It emerged during Media Freedom Day that former ANC spokesperson Jesse Duarte had told the Press Council that the ANC was no longer pursuing the tribunal.

“We don’t know whether it’s dead or not,” Thloloe said. “It might come in the next [ANC] conference. But we maintain that it’s unconstitutional.”

The ANC has publicly affirmed its support for press freedom. In March, Duarte told the International Freedom of Expression eXchange: “The freedom of the press is an important platform for the ANC and even though there have been discussions in the ANC about a tribunal . . . it’s not a decision.”

Freedom of expression is guaranteed in Section 16 of South Africa’s Constitution, which came into effect in 1996. But the document also imposes limitations on this freedom, stating that it does not extend to “propaganda for war, incitement of imminent violence, or advocacy of hatred that is based on race, ethnicity, gender or religion, and that constitutes incitement to cause harm”.

These limitations must be scrutinised to determine any statutory developments, Thloloe said. “The limitations are clearly spelled out in the constitution. We do not need a statutory tribunal to tell the media what to publish and what not to publish.”

Nonetheless, Thloloe said trying to compare press conditions of 1977 to those of today was like “comparing day and night”.

Delegates agreed proactive vigilance was still required to protect media freedom. The press ombudsman, with whom the public can launch complaints against violations by newspapers, helped ensure freedom of expression was not abused, said Thabo Leshilo, Sanef spokesperson and Avusa public editor. It was even inspiring that in Thloloe the media had “someone from the industry who knows how we operate”.

“It is positive that even [President Jacob] Zuma goes to the Ombudsman when there’s a crisis,” said Leshilo. “The media should regulate itself.”

For Phil Mthimkhulu, a former journalist whose newspaper was banned on 19 October 1977, there is a lot to celebrate in South African journalism. “Since 1994 there have not been serious cases taken to court by the government,” he said. In 1994, apartheid effectively ended with South Africa’s first democratic elections.

“Looking at Africa, our press freedom is second to none. It’s not that there have not been threats, but it’s not an avalanche,” Mthimkhulu said.

He was also impressed by the journalism programmes that have been set up in the country’s universities and other training institutions. “We now have young journalists with good education. When we started we did not get any training.

“We were not even aware of the legislation and we used to get into trouble with the law.”

Mthimkhulu told the audience about his experiences 32 years ago, on Black Wednesday.

“I arrived at the offices of Weekend World in Industria [Johannesburg] … I was filled with trepidation as I entered the gate.”

He was told that the newspaper had been ordered to close down, and that the government was to confiscate all of the company’s money, withdrawing it from the bank.

In 1978 Mthimkhulu was arrested “for stealing our money” alongside Juby Mayet, a former journalist for Drum magazine who had tipped them of the move to clamp down on Weekend World. According to legislation of the time the money and other assets of the organisation belonged to the government after the newspaper’s closure.

Recently retired chief justice of the Constitutional Court, Pius Langa, paid tribute to local media by comparing its work to that of the judiciary – both are used to protect South Africa’s democracy. “What we have in common is words. What words give us in a democracy is power.”

Langa said South Africa is a noisy country and the local media adds impetus to its voice. It should not be silent on anything that threatens the country’s democracy. “I will mourn that day, if ever it comes to pass. I doubt we will even be silent,” he said.

“I think it’s rare to meet a South African who doesn’t enjoy the sound of their own voice. We talked our way through apartheid to peace …we continue to talk our way through our democracy.”