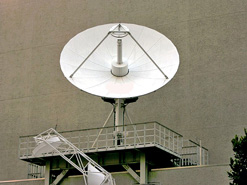 South Africa joins the rest of the world
that has already moved away from
analogue to digital broadcasting.
(Image: wikimedia.org) 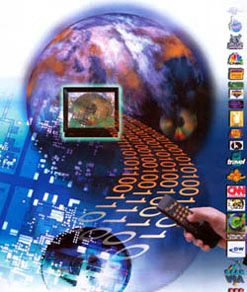 Sentech, South Africa’s broadcasting technology centre, made the switch, which is expected to start working in certain households on 3 November.

Speaking at the official launch of the “switch-on” in Johannesburg on 30 October, director-general in the communications department Lyndall Shope-Mafole, said the Broadcasting Digital Migration (BDM) system also had the potential for special interactive services to cater for people with visual and hearing impairments such as audio description and subtitling,

“Broadcasting Digital Migration will bring many benefits including efficient use of the frequency spectrum, a public and scarce resource.

“It will bring more channels and therefore more diverse content delivered to the South African public.

“The digital switch over will see the telecommunication industry of radio and television utilised more efficiently.

“The Broadcasting Digital Migration is made necessary by the developments in telecommunications technologies which enable a more efficient use of radio frequency spectrum as well as better quality pictures and sound,” she said.

During this time, both digital and analogue signals will be available; hence households will not be required to use the set top box, a type of decoder.

Speaking during her budget vote speech in June, Motsepe-Cassaburi said decoders were going to be made according to the highest standards, “The decoder system will be installed to protect South Africa’s design and manufacturing capability.

“The control system will enable communication between the broadcasters and the public, and provide for e-government services which can become interactive in the future.”

After the analogue system is completely switched off in 2011, the decoder will be needed to convert the analogue signal to digital for TV sets that are not digitally compliant.

Speaking at the event, communications minister Ivy Matsepe-Casaburri said government realises that there are many South Africans who will not be able to afford the set top box, and as such, the department would devise a scheme to subsidise set top boxes for the poor.

The set top box will be sold for around R700 (US$72) of which R400 ($41) will be subsidised by government for poor households using the Universal Service Fund. Cabinet has already approved R2.4 billion ($300 000) for the subsidisation of the decoders to the five-million poorest households

The industry is changing over to digital TV in accordance with the International Telecommunications Union (ITU) directive, to ensure that there is ongoing co-ordination and protection from interference of broadcasting signals.

The protection of signals agreement that all countries currently enjoy will come to an end by 2015.

At the moment, South Africa has agreements with a number of countries to ensure that there is no interference between various countries through its integrated frequency plans.

As a result of the increased efficient frequency signals, it will now be possible to provide new television channels and specialised television services dedicated to education, health, youth, sports as well as three regional service channels.

This move has been backed by the public broadcaster the South African Broadcasting Corporation (SABC).

The acting chief executive officer of SABC, Gab Mampone said the public broadcaster would provide up to eight new video channels in the same bandwidth as one analogue channel.

“The migration to digital process is expected to take a minimum of three years. Viewers will still be in a position to receive the current analogue services of SABC 1, 2, 3 and e-tv and M-Net,” he said.

During the Johannesburg launch, attendees were already able to view two new SABC channels, which were showcased during the event. This was the SABC entertainment channel as well as SABC’s international news channel.

Viewers can also expect an additional channel from free-to-air channel e-tv and another one from pay-TV broadcaster M-Net.

According to spokesperson for the communication department Joe Makhafola, the SABC, e-tv and M-Net will distribute some three thousand decoders collectively on a trial basis. After the trials, the digital signal will be available to the public as an option to use mid 2009, even though they still have analogue option until 2011.

The aim of the trials would be to ensure that technical gremlins in the system are sorted out before the service is made fully available to the public.

Makhafola also added that the decoders have been developed locally, in a bid to encourage the increased participation of black entrepreneurs in the ICT sector,

“Government has decided to encourage the participation of more black people to transform the local industry.”

Despite concerns from the industry that the trial decoders have entered the country and are yet to be approved by standard authorities, Makhafola is confident that the process will not have too many glitches along the way.

South Africa now joins countries like the United Kingdom, New Zealand, United States, France and Mauritius that are advanced in their migration process of moving from analogue to digital.

Matsepe-Casaburri has appointed the Digital Dzonga Advisory Council to advise on and oversee the complex process of changing the system from analogue to digital.

The 12-member council consists of representatives from various sectors as well as the labour and consumer groups.

Lara Kantor, the chairperson of the Council, says the trial to be an important first step, “We are excited to be witnessing the start of the broadcaster trials on DTT. We believe the trials will yield important findings to guide us, as we plan for the launch of DTT to the public in mid-2009.”