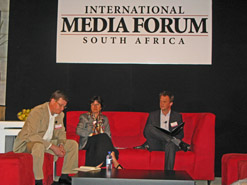 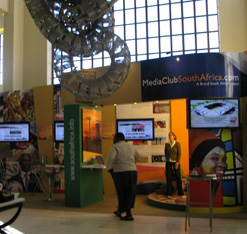 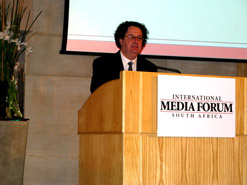 The strongest identity a country has is its brand, the way it portrays itself to the world and, in turn, the way the world perceives it. And at the second International Media Forum South Africa (IMFSA), held in Johannesburg on 21 and 22 May, government, business and the media, both local and international, came together to unpack Brand South Africa.

The mission of the IMFSA is to improve international media relations, mostly for the economic development of South Africa, but also for the continent as a whole.

Opening the conference this year was Dr Essop Pahad, minister in the president’s office. In welcoming the delegates he spoke of the critical role the media has in shaping the national agenda. “The media are not neutral purveyors of news and voyeurs of facts. They are political actors and political agenda setters in their own right and through the social construction of news,” he said.

“Through a set of values which they secrete … they decide what is important for readers to think about, they in effect structure the thinking of readers.”

He stressed the importance of cherishing and protecting the freedom of the media but in the same breath also urged delegates to be vigilant about any transgressions on the rights of others by what he termed “the guardian of the public interest”.

MediaClubSouthAfrica, a web-based media service which offers journalists and other communication practitioners free access to content about the country and its development, was officially launched on the first day of the conference.

Brand South Africa (formerly known as the International Marketing Council), co-hosts of the IMFSA, are the custodians of MediaClub, which includes a comprehensive image library.

Talking about the venture, Brand South Africa’s Tyrone Seale said, “MediaClubSouthAfrica.com will provide relevant, mind-opening, up-to-date and verifiable information in the build-up to 2010. We took this step because we recognise the importance of media – local, African and throughout the world – in shaping perceptions of South Africa and our continent.”

Also on the first day of the conference, a number of leading journalists from around the world spoke about their experiences in covering South Africa.

Lambert’s address was then followed by a panel discussion entitled “The big debate”. Chaired by Professor Anton Harber of the University of Witwatersrand’s Department of Journalism and Media Studies, the discussion sought to understand different points of view in terms of international media coverage of South Africa in relation to countries with similar economies.

CNN’s Kim Norgaard made the point that while there may be a perception that the international media is only interested in reporting the negative stories coming out of South Africa and the rest of the continent, this was not entirely the case. As a news agency they had the responsibility to cover current affairs, which may be seen as “negative” reporting. This, however, was coupled with the positive human-interest stories too.

He said that CNN’s audience had become a global one and that Africa was no longer the poor cousin of the world. The news channel had a responsibility to its African viewers to balance the reporting and angles used on the different stories.

To give a more South African perspective to the debate, Ian MacDonald, editor of South Africa: The Good News, said that in his view international media do more harm than good in their reporting on the country.

He pointed out that his online publication was committed to writing the good news, not because it was turning a blind eye to the challenges faced by the country, but because there was a critical shortage of good news coming out of South Africa. He said the international media had to do more to give a balanced picture of what was happening in the country.

While many speakers said that the current xenophobic attacks taking place in certain parts of the country have deeply hurt South Africa’s image abroad and might also hinder tourism as well scare away investors, some speakers were positive that all is not lost.

Chip Cummings, Africa bureau chief for the Wall Street Journal, spoke of the big role South Africa plays in the economic development of the continent. The mining industry is especially of interest to the “A list” international business community. He said that businessmen across the globe are constantly looking for new investment opportunities and in many ways look to South Africa as the continent’s business leader.

Cummings spoke of the responsibility of business reporters to always report on the fresh and exciting news coming out Africa. “Nothing gets a business reporter’s heart racing more than news of a big [business] deal. Especially if it’s a big African deal,” he said.

Ayanda Ramncwana, a government spokesperson, prompted heated debate among the delegates when she said, “We need to separate Brand South Africa from the South African government.”

She spoke of separating the need to report accurate news and the need to promote a Brand South Africa. Some of the delegates were of the view that there needed to be synergy between the two, while others contested that they should remain separate entities and that organisations like the IMC should not be “putting out” government fires.

The second day of the conference saw the level of debate taken a notch higher. ANC deputy president Kgalema Motlanthe opened the session with an address entitled, “How do you communicate what the country has to offer in order to improve international confidence and media coverage?”

In his address, Motlanthe spoke of the media holding the key position of information dissemination, which can be used as an instrument of empowerment, development and progress. He said that the government was committed to protecting media freedom, but that in turn the media had a responsibility to represent every sector of society. “We seek a media environment that is rich and vibrant, and which represents the diversity of languages, interests, experiences and political perspectives that exist in our society,” he said.

“We want to ensure that those South Africans whose views and interests have not been adequately represented in the media now have an opportunity for their voices to be heard.”

The issue of South Africa’s state of readiness in adherence to Fifa’s requirements for the World Cup came under scrutiny. Tim Modise, the chief media and communications officer for the 2010 Local Organising Committee, and BSA’s acting CEO Moeketsi Mosola were some of the panellists who took part in this debate.

Modise also dispelled the myth that Fifa was snatching the World Cup away from South Africa and handing it over to Australia, as hinted at in some media reports.

Journalists posed some tough questions about access to information about the LOC programmes ahead of the event, as it seemed that reaching the LOC was difficult at times. Modise acknowledged that more needed to be done to keep journalists informed about World Cup developments in a bid to end speculative reporting which contributed to fears that South Africa will not be ready to host the event.

In wrapping up the two-day event, Prof Harber spoke of the recommendations made at the last IMFSA in 2006, and said he felt confident that the direction the debates had taken had yielded the desired effect of opening up debate and communication around the branding of the country, government-press relations and reporting news accurately about South Africa without forgetting the good news.