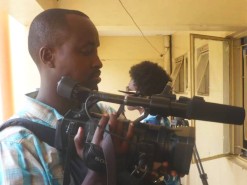 An African journalist plies his trade at a
training workshop on HIV/Aids for
young TV producers in Nairobi,
organised by Unesco in collaboration
with the East African Film Institute
and Development Through Media.
(Image: Unesco)

The second edition of the World Journalism Education Congress (WJEC2) takes place in Grahamstown, Eastern Cape, from 5 to 7 July 2010.

Hosted by Rhodes University’s School of Journalism and Media Studies, the conference has almost 350 confirmed attendees from 42 countries across Africa and further afield.

With thousands of the world’s media currently in South Africa to cover the 2010 Fifa World Cup, the conference is an ideal opportunity to highlight journalism education in this light, said Prof Guy Berger, the head of the Rhodes journalism school.

Registration is still open and the form may be filled in online at the congress’s website.

WJEC2 will be opened with a speech from Evaton, Gauteng-born Advocate Pansy Tlakula, special rapporteur to the African Union on freedom of expression, while Archbishop Emeritus Desmond Tutu will deliver the closing keynote speech.

With six expert panel discussions, ranging in topic from reporting in a hostile environment to shaping the future of journalism curricula, and a number of plenary sessions, every attendee will take something useful away.

The finalised programme is available on the WJEC2 website.

Discussions focusing on new media such as social websites, mobile journalism, and blogging are also on the agenda.

As if this wasn’t enough, participants will be able to attend 130 research paper presentations. In addition, all proceedings will be translated simultaneously into French and Chinese, for non-English speakers.

The congress is said to be an excellent opportunity for networking  but for those unable to attend in person, much of the programme will be streamed live via the WJEC2 website. According to Berger, up to 11 sessions may be streamed simultaneously.

The first World Journalism Education Congress took place in Singapore in July 2007 with the Asian Media Information and Communication Centre hosting. Several ground-breaking steps were taken during the inaugural congress, among them the release of the World Journalism Education Council’s Declaration of Principles, and the launch of the Unesco model curriculum for journalism education.

This year’s congress will see the launch of a Unesco-compiled model syllabus of ideas for teaching about African media.

The second edition will run in conjunction with the 14th Highway Africa conference, also taking place in Grahamstown. This annual gathering is held jointly by the South African Broadcasting Corporation and Rhodes University’s journalism school, and brings together journalists from all over Africa, to discuss and debate the state of media on the continent.