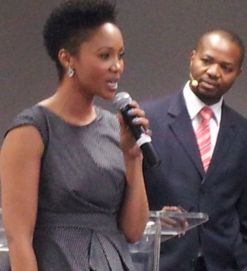 Power FM plans to hold “authentic conversations” to reflect who its target audience is, and what their aspirations are. The commercial talk radio station goes live on 18 June, aiming for the 25- to 49-year-old age group in Gauteng.

It received its broadcast licence from the Independent Communications Authority of South Africa in 2011, and has pulled together a top team, attracting broadcasters from rival stations like the South African Broadcasting Corporation’s SAfm and Primedia’s Talk Radio 702.

“Power FM will not be your typical broadcaster,” says Given Mkhari, the station’s chairman and the chief executive of MSG Afrika Investment Holdings, the majority shareholder of Power FM. Minority shareholders are Ndalo Media, African Women Chartered Accounts and the station’s management.

Available on 98.7FM, it will broadcast 24 hours a day. Talk will run from 5am to midnight during the week, and music from midnight to 5am. On the weekends, music will be predominant, with timeless hits played around the clock, interspersed with talk.

“We intend to spotlight conversations that take place in private environments but are not sufficiently shared in the public arena. We want to fill a gap that exists in broadcasting and be a platform for engagement for those South Africans who want to see their lives improve and a country at work,” adds Mkhari.

Power FM is to be “pro-South Africa, pro-development, optimistic and unapologetic”.

Station manager Ferdinand Mabalane explains: “Our programme line-up and schedule is informed by our understanding of the needs and expectations of our target market.”

The 6am to 9am slot will be hosted by Tlhabane, Mgabadeli and Andrea van Wyk. McKaizer will take over from 9am to midday, followed by Azania Mosaka until 3pm. Tema will host the afternoon show from 3pm to 5pm, supported by team members Tshidi Madea, Katlego Mogase, Jadene Tager and Karabo Yibe.

Masechaba Lekalake will take over until 9pm, when Modise take the reins until midnight. Sunday Times columnist and author Ndumiso Ngcobo will run with the show until 3am, when Asanda Magaqa will join the sparrows until 6am.

The weekends will be hosted by Paul Mnisi, aka Rudeboy Paul, Tumisang Ndlovu, husband and wife team Mio and Queenie Khondleka, Pabi Moloi, DJ Franky, and BBC International TV anchor Lerato Mbele. That Rudeboy Paul and Moloi have joined the team took everyone by surprise. The former was a YFM DJ before branching out from radio, and the latter resigned from Highveld Stereo to pursue other interests.

Behind the scenes will be 25 journalists gathering the news, 80% of which will be internally generated. New editor Benedicta Dube says she doesn’t see that Power FM’s competition, Talk Radio 702 and SAfm, will be an issue. “We will be bringing a new narrative that is completely different, that talks to the human view.”