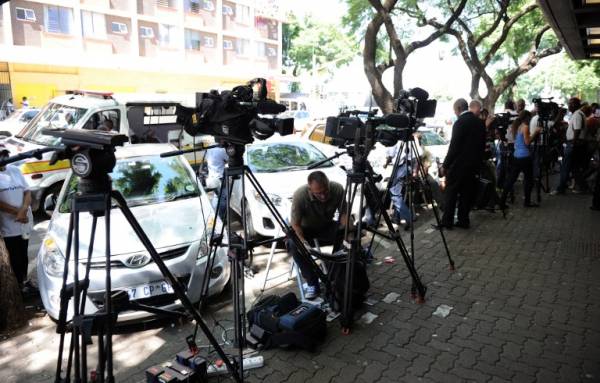 “We would never consciously undermine our own efforts over the past ten years.” From the eNCA apology (Image: eNCA)

Winning the right to broadcast the Oscar Pistorius trial came with clearly defined restrictions, one of which prevented the media from showing the faces or publishing photographs of witnesses who had not consented to being filmed.

Judge Dunstan Mlambo’s ruling was hailed as a balancing act between press freedom and individuals’ rights by some, and as censorship by others.

On the second day of the trial that ruling was put to the test. Patrick Conroy, head of news at eNCA, had checked with the court clerk for permission to use a photo of witness Michelle Burger that had appeared in two Afrikaans newspapers. The argument Conroy and eNCA put forward was that showing a picture of Burger with the caption – “On the stand: Michelle Burger, Pistorius’s neighbour” – to accompany the audio feed as she testified was not a violation of the judge’s order.

But a fuming Gerrie Nel, the prosecutor, reminded Conroy that the state interpreted the ruling to mean that any image of a witness, no matter the source, would breach the spirit and intent of the earlier ruling. Nel told the UK’s Daily Mail newspaper that eNCA originally wanted to use a photograph of Burger taken outside the court. “The court said no. They still went ahead and did it using a photo they found somewhere else.”

Attorney Pamela Stein does not read the ruling as narrowly. A media specialist and partner at the firm Webber Wentzel, as well as a co-author of the newly released Practical Guide to Media Law Handbook, says: “If I were advising eNCA I would have told them to go ahead and publish the photo. The picture was not taken while the witness was on the stand. The court’s control extends only as far as the door of the court.”

Confusion around the interpretation of Judge Mlambo’s ruling comes from the wording used – no images of witnesses if they did not provide permission. The newspapers, Beeld and Die Burger, and eNCA argued that his ruling forbade images taken inside the court while testimony was being given. This is a longstanding concession between the media and the justice system.

Conroy argued that the legal advice the news group got was in line with this understanding, before conceding in an apology on the channel’s website: “But, on reflection, this was a bad judgement call on our part and we accept that it did not accord with the spirit of the court order.”

Trial judge Thokozile Masipa strengthened the ruling by saying any image of a witness who did not want their face shown, was now off limits. She went on to warn the media: “If you do not behave, you will not be treated with soft gloves.”

In an editorial, South Africa’s The Times newspaper said: “At the heart of yesterday’s controversy was the weakness of the Mlambo judgment. The judge shied away from either opening the courtroom to broadcasters or keeping them out altogether. By choosing a middle route, he has opened the way for confusion and, as occurred yesterday, unwise rulings that threaten media freedoms and extend the procedural authority of judges beyond courtrooms and on to the streets.”

This is not the first time that photographs have caused an uproar in the matter. A year ago, crime scene photos from Pistorius’s Silver Lakes home were leaked. At the time, the original investigating officer told the English newspaper Sunday People that he knew of police officers who were being offered large sums of money for photographs taking in the house.

Even Blade Nzimande, the general secretary of the South African Communist Party, waded into the controversy. He wrote in Umsebenzi, the SACP magazine: “Even worse, the sentiment coming across is that it is Pistorius’s rights that have been violated and not those of the Steenkamp family and of Reeva, whose blood is literally splashed in that footage! Sanef [South African National Editors’ Forum] is dead silent on these matters. And it is also the rights of a man that are elevated above those of a woman. In fact, this patriarchal and elitist message has come to characterise the voluminous media coverage of this matter, especially by eNCA on 4 June 2013 and before that!”

The intent of eNCA at the beginning of the trial, in the words of journalist Karen Maughan, was to give clear-headed insights into the workings of the South African judiciary. The channel’s top legal reporter wrote: “coverage so far has been tainted by inaccuracy and sensation. The good and the bad of our justice system in South Africa will be on display. We will cover this trial honestly, calmly and fairly.”

With 80 accredited journalist filling the courtroom and the overflow area, and another 200 filling a room outside the court, all looking for exclusive content, it was inevitable that the line of what was permissible was going to be tested.

As blogger Akanyang Africa wrote in his blog: “Of course I know that this [Judge Mlambo’s restrictions] would have been seen by many as being the worst censorship in as far as press freedom is concerned. But rights have limitations too and by putting this condition in place, Judge Mlambo would have exercised and limited that right correctly.”

The law is fluid, a living thing, especially in a democracy as young as South Africa. There will be a continuous give and take as the citizenry and the government and its institutions find a comfortable space to co-exist. The scrutiny given to this trial is proving to be the perfect vehicle for the media and the justice system to redefine the margins of what is, and what is not permissible.