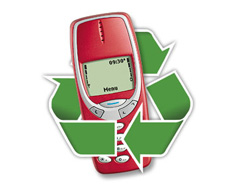 Most people are unaware that their old mobile phones can be recycled. Now South Africa is a part of mobile giant Nokia’s multi-national recycling programme that aims to cut down on electronic waste. And not just Nokia phones, but any make are welcomed, as well as batteries, chargers, and other accessories.

Nokia reports, in a July survey polling 6 500 people in 13 countries, that only 3% of old mobiles are recycled because their owners simply aren’t aware that they can still be useful in a different way. Awareness varies widely between countries – from 80% of respondents in the UK to just 17% in India.

A significant 75% said they didn’t even consider the possibility of recycling; although about the same number believe in recycling as a benefit for the environment.

Most old devices, 44% according to Nokia, are just kept at home and never used again, while 25% of users pass their phones to family or friends and 16% sell their used devices, particularly in emerging markets. In South Africa it is believed that the majority of older phones are handed down.

Markus Terho, Nokia’s director of environmental affairs, markets, said, “If each of the 3-billion people globally owning mobiles brought back just one unused device we could save 240 000 tons of raw materials and reduce greenhouse gases to the same effect as taking 4-million cars off the road. By working together, small individual actions could add up to make a big difference.”

Nokia is pushing for more public involvement in the recycling initiative, saying that it will cut down on the need to extract and refine material for new products, saving energy, chemicals and waste.

Those interested can take their old phones to any Nokia Care point in over 50 locations around South Africa, from Alberton to Westville. The South African scheme is part of Nokia’s global recycling campaign that spans 5 000 locations in 85 countries.

All components can be reused

According to Nokia, 100% of a phone can be reused, if not recycled. “Using the best recycling technology, nothing is wasted,” commented Terho. “Between 65 to 80% of a Nokia device can be recycled. Plastics that can’t be recycled are burnt to provide energy for the recycling process, and other materials are ground up into chips and used as construction materials or for building roads. In this way nothing has to go to landfill.”

US-based mobile recycler PaceButler said that more gold can be recovered from one ton of mobile phones than from 17 tons of gold ore. Mobile phones also yield useful materials such as platinum, palladium and copper, as well as plastic and glass.

Mobiles and other electronic devices also contain toxic materials such as heavy metals and chemicals. Circuit boards, batteries, and casings contain lead, cadmium, mercury, polyvinyl chloride, and a number of other poisonous substances, which can be released into the environment when devices are not disposed of correctly.

Nokia works closely with companies who use reclaimed material, assessing them regularly to ensure that anything passed on to them is recycled responsibly.

But recycling can have other benefits that are not immediately apparent. A recent report on PaceButler’s website says that the mining of a metallic ore known as coltan, which is used in mobile phones in the form of its derivative metal tantalum, is helping to drive unrest and bad conservation practices in parts of Africa.

Coltan is the common term for columbite-tantalite and is used in the production of niobium and tantalum. While the ore is mined in a number of countries, including South Africa, the largest deposits are found in the Democratic Republic of Congo, which is believed to possess 80% of the world’s coltan reserves according to National Geographic.

Mining is carried out by hand and is focused on the eastern part of the country, an area which is also home to the Kahuzi-Biega National Park, a world heritage site, and the Eastern Lowland or Grauer’s gorilla (Gorilla beringei graueri), the largest primate on earth.

The demand for tantalum in the communications and other electronics industries has led to bands of rebels taking up mining alongside their subversive activities, and the profits from the sale of the ore – which at one time reached $600 (R4 900) per kilogramme – is fuelling their military agenda.

The gorillas are suffering because people are flocking to the area to claim their share of the ore, and decimating the animals’ habitat in the process. But gorillas are also being hunted as food for rebel gangs and hungry miners. The magnificent beasts are now in danger of extinction – before war broke out in 1998 they numbered around 17 000, and today there are less than 3 000 left.

Recycling phones will reduce demand for coltan and consequently contribute to the effort to save the gorillas, says PaceButler.