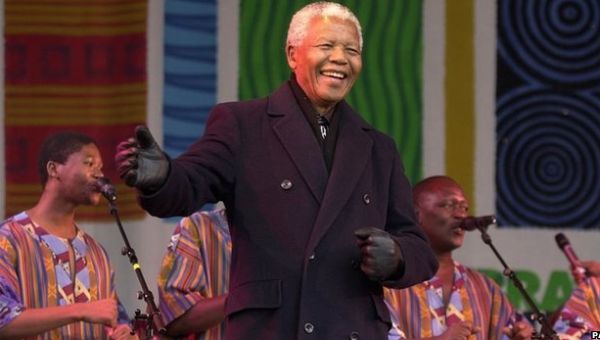 “It is music and dancing that makes me at peace with the world.” – Nelson Mandela (Image: BBC)

Atticus Finch, the champion of To Kill a Mockingbird, is the ideal fictional hero. He is the calm at the centre of the book, the polite strength who believes in the mind above the fist. Finch, played by Gregory Peck in the film, is the archetype of a certain kind of manliness – a self-assured poise expressed through lessons taught to his children. He shows leadership through quiet strength. Atticus Finch made you want to say: “That is an ideal of manliness that matters, that we should strive for.”

At one point he says: “Courage is not a man with a gun in his hand. It’s knowing you’re licked before you begin but you begin anyway and you see it through no matter what. You rarely win, but sometimes you do.” It is lessons like these that bring to mind Nelson Mandela, a South African hero who comes closest to the heroic fictional ideal. Mandela’s heroism and idealism set him above most, and his life has inspired artists to create great works. He is the canvas on which artists express ideas about the world and how it should be.

In music, Mandela influenced artists across genres stretching back to his life in prison. When American soul and jazz poet, musician, and author Gil Scott-Heron released Johannesburg in 1975, heroic Mandela was just an idea. His example influenced lyrics such as “glad to see resistance growing”.

More than a decade later, in 1987, Mandela was three years from being released unconditionally from prison, a day that few in South Africa could imagine. The country was in the middle of an oppressive state of emergency, when any opposition to the apartheid government was met with force. Bright Blue boomed into this world, deeply influenced by the country in which the band was born. The music was a mix of the eighties English pop of white suburbia, the swing and swagger of township jive, and the African rhythms and harmonies of mbaqanga.

It was one of many South African bands at the time, all mixing up a uniquely South African sound and urging an end to apartheid. But the song that separates Bright Blue from their contemporaries was written while Dan Heymann was serving in the South Africa Defence Force, the old apartheid army into which all white males over the age of 18 were conscripted for two years. The melancholy Weeping, with its sly dig at the apartheid regime in the intro – hinting at the then-banned ANC anthem Nkosi Sikelel iAfrika – lifted the song with its moving, angry lyrics and iconic saxophone break into one of the most important South African songs.

Pop is not the only genre inspired by Mandela, and an opera influenced by him is not a disparate idea. Madiba loved music and the Mandela Trilogy opera brings together different genres that sound-tracked his life. It is a polished piece written by South Africans that tries to unravel the enigma of a man whose life seemed to be an open book.

The opening act, with its Xhosa choral pieces, deals with his youth in the Transkei. The second act, with its township jazz soundtrack, is the most vibrant and covers his life up to the Rivonia Trial. The optimistic finale is Madiba free from prison and balancing the demands for freedom now with the realities of leadership. It is trite but beautifully captures the spirit of the nation throwing off the shackles.

In the years after he stepped down from the presidency, Mandela was known to have enjoyed sitting in his Houghton home in Joburg, watching the sun set while listening to classical music. His biography, Long Walk to Freedom, inspired composer Wilhelm Kaizer Lindemann to produce Hommage à Nelson M, for cello & percussion, Op.27.

And the youth orchestra at the Frank Pietersen Music Centre in Paarl, founded in 1970 as an outlet for disadvantaged youth, has won international acclaim for its orchestral piece, A Song for Mandela.

Pablo Picasso once said that art exists to wash the dust off our souls. Artists, however, need inspiration, and they find it in the best of us. Artists have used Madiba’s example to fill in the Technicolor glory of the world of which Nelson Rohlihlala Mandela dreamed.