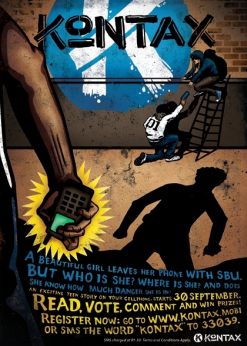 The story is available to download from the Kontax mobile site in English and isiXhosa. It can be accessed for free, although a once-off fee of R1.50 (19 US cents) is charged when registering via mobile.

Those who do not have Wap-enabled mobile phones can still read the novel on their computers by visiting the mobile site in a normal web browser.

Launched at the end of September 2009, Kontax describes the adventures of a group of graffiti artists in a South African city. It’s written by award-winning scriptwriter Sam Wilson of the Cape Town-based production and content company Clockwork Zoo.

Project developer Mobiles for Literacy (M4Lit) opted for a serial-release format, issuing one chapter every day over a period of three weeks, ensuring that young readers would come back for more. Chapters were no longer than 400 words to sustain readers’ interest.

The mobile site encouraged interaction and discussion of the plot through polls and comments, with the best comment from each day’s release winning mobile airtime. Mobile wallpapers, featuring the characters and the book’s logo, are also available for download.

Mobile novels evolved from text messaging, and are said to have been started by Japanese women writing about their romantic experiences. The genre is hugely popular in Japan, with several websites luring authors with prizes of up to $100 000 (R766 316), and generous offers to buy the print publishing rights to their novels.

In 2008 six of the 10 best-selling books in Japan began life on the tiny screen. Some have criticised the growing trend, saying that it is unacceptable for a country with a rich, thousand-year legacy of reading, but Japanese youth pay no heed.

As Bernard Kedge, manager of 107-year-old Cambridge bookshop Galloway and Porter, put it: “This is sometimes how education works. Anything that actually encourages people to read more is a really excellent idea.”

Building a love of reading

M4Lit is supported and funded by the Shuttleworth Foundation. Project leader and ICT specialist Steve Vosloo, also the foundation’s 21st Century Learning Fellow, and his team are exploring the significance of mobile literature as a tool for increasing literacy and a love of reading among South Africa’s youngsters.

In many areas of South Africa, as well as in other developing nations, it can be easier to access a mobile phone than the internet or even a printed book, and teens tend to be well-versed in mobile applications such as MXit.

“In South Africa there is about 10% PC-based internet connectivity,” Vosloo blogged on Tech Leader during October 2009. “While the number of people with access to mobiles ranges from 60% to 90% (depending on which community you look at). Of those phones, a high number are Wap-enabled and can access the internet,” he said.

The objectives of the project are to encourage youth to read and write more through the mobile medium, to assess the response of youth to mobile sites such as that of Kontax, and to fine-tune the medium in order to entrench the mobile reading culture.

“We know that Japanese m-novels are very popular and for South Africa, this is the beginning of more to come,” said Vosloo.

According to the M4Lit website, readers have described how the novel is helping them stretch their literary muscles, saying that they turn to the dictionary for words they don’t understand, thereby broadening their vocabulary.

Kontax is essentially a mystery novel involving the four-member Kontax graffiti team of Sbu, K8 (Kate), Songezwa and Airtime. Each person plays an important role in the team, bringing strengths of vision, training, technique and creativity.

Graffiti is their life and they practise their craft wherever and whenever they can (and even where they shouldn’t). At a party Sbu meets a mysterious girl who then disappears, leaving only her mobile phone. Attempts to trace her prove fruitless, as her mobile contact list offers no help at all. The team senses danger but presses on, and eventually the characters find themselves in the middle of a kidnap drama.

Wilson also added a couple of moral dilemmas to the novel for youth to ponder and discuss. One examined the acceptability of going through a person’s private information when his or her life may be in danger.