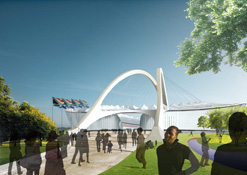 With the 2010 Fifa World Cup only eight months away, the football tournament’s organising committee (OC) has invited the media to register for accreditation. This process, for professional permanent and freelance media, will launch on 5 December, the day after the final draw, and close on 31 January 2010.

A media accreditation workshop held at Safa House, the South African Football Association’s headquarters, in Johannesburg on 5 October was the first in a countrywide campaign to educate the media on accreditation. At the briefing, OC representatives explained that media professionals have to apply online for accreditation on the Fifa Media Channel. The accreditation form can only be accessed once a new user account has been created. The registration process will also request media to attach a press card or other professional media credentials.

The OC stressed that the online application does not guarantee accreditation – it is only the first step in the screening process. Sifiso Cele, OC media accreditation manager, said Fifa had asked the organising committee not to reveal the selection criteria, or the number of journalists that will receive accreditation in each country.

He said everyone who applies will receive confirmation via email indicating whether their application was successful. Applicants who are rejected will be provided with reasons for the decision. Further motivation for such applications will be necessary, and journalists’ organisations may contact Fifa and the OC to review the decision.

Jens-Peter Hecht, OC media operations manager, said it is also important to note that this is not a “blanket accreditation” for all Fifa World Cup events – media have to apply for SADs on an event-to-event basis.

Cele explained that, as in previous World Cup finals, each football association will be allocated a quota of written press and photographer accreditations. Correspondents for foreign newspapers in South Africa should also submit requests for accreditation to their respective national associations in their country of origin.

Freelance journalists and photographers have to follow the same process by registering online first. He emphasised that no late registrations of any media practitioners will be considered.

Accreditation for the final draw

Journalists who wish to cover the final draw on 4 December should apply for accreditation on the Media Channel between 1 and 31 October. In his presentation, Cele said that approvals of media accreditation requests would be limited to the capacity of the facilities.

The application information submitted is also subject to a review process, the availability of space in the Cape Town International Convention Centre (where the draw will take place) and a security check.

Besides initial registration, the Media Channel will be a useful resource for journalists, photographers and other media professionals covering the World Cup. It will be a one-stop shop for everything to do with the event and registered users will have access to media information not available on FIFA.com.

The Media Channel will have a detailed events calendar with listings of all Fifa and partner media events. Information on stadium media centres, transportation, parking, participating team-related activities, training sessions and special media announcements can also be found on the site. Most importantly, the Fifa Media Channel includes the match ticket application tool to request match tickets.

At the workshop, the OC outlined the special conditions for Fifa non-rights local and international broadcast media. Marcia Mahlalela from Fifa TV explained that any broadcast organisation or persons who are not licensed rights holders (do not hold the broadcast rights for the event) fall within this category.

Non-rights holders (NRH) who would like to cover the event can do so, provided they comply with certain criteria and are accredited. As is the case with other media, Mahlalela pointed out that only a certain number of NRH accreditations are available. Upon approval, the NRH will be issued with NRH accreditation and stickers to identify their broadcast equipment.

She said that accredited NRH media would not be allowed to record or broadcast within the stadium precincts, including the surrounding areas where the match is taking place. The OC said that this is in an effort to protect the interests of rights holders. Anyone contravening this would have to leave the stadium and would have their accreditation withdrawn. NRHs will also not have access mixed zones, interview studios and press conference rooms.

They can, however, request observer seats, provided there is space at least 90 minutes before the start of the game, but no broadcast or recording equipment can be brought into the stadium on match days. This provision is also on a first-come-first-served basis.

Any footage required by a NRH can be obtained from the South African Broadcasting Corporation (SABC), the media rights licensee. But Mahlalela emphasised that this does not entitle the NRH to upgrade their accreditation status to that of a rights holder.

Some journalists expressed concerns about the difficulty in communicating with the SABC during the 2009 Fifa Confederations Cup earlier this year. Mahlalela assured the media that Fifa and the OC are in the process of ironing out any difficulties with the public broadcaster.

More workshops are scheduled in other parts of the country from 6 to 23 October: