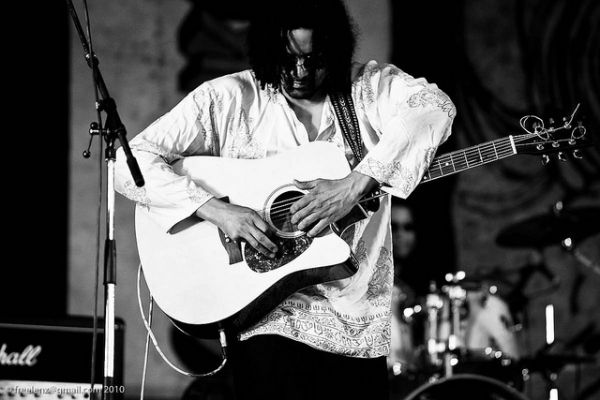 The soundtrack, a first for South African TV, created by Les Javan for the drama Vlug Na Egipte is influenced by his career in jazz and the sounds of the Karoo(Image credit: Christoph Lenz)

Vlug na Egipte is special: the locally produced television series is the first production to have a soundtrack composed especially for it. Shot around the Karoo town of Hanover it will begin airing from 13 January on local satellite station kykNET, the series is set in Hanover, in the Karoo.

Les Javan’s arms roll out from his chest like a wave, his hands tumbling over like a swimmer dragged below the surface. He speaks softly, while a choir sings Hallelujah acapella; it was recorded by the producers as an example of the sound and feel they wanted Javan to create. “This is me humming,” he says. “I took that sound and built my ideas around [it] to create a local feel to go with the series.”

An angelic guitar starts, followed by his voice. “We were going to use this song for the closing credits, but Human [Stark, the director] wanted the instrumental track.”

Guitarist and composer Javan is explaining the process involved in creating identity and mood using music. He swivels in his chair between monologues and sips of coffee and plays a series of hypnotic notes on the keyboard, a loop suggesting the blooming and falling of the character soundlessly mouthing dialogue on the monitor in front of him.

“What happens in episode one has to be mirrored in episode 26, so you create themes, a sound that identifies and is unique to a character.” He hums, a whisper soft minor note. “Now this theme, I have been hinting at it for four episodes, and now we develop it further. But the audience will pick it up immediately.” Through the speakers minor notes picked on a guitar swell dramatically as they are joined by piano.

Traditionally, historically, producers have used archival music as the soundtrack for TV productions, making an effort to create memorable theme music or exit music as the credits rolled. Classic Afrikaans TV dramas like Wolwedans in die Skemer and Ballade vir n Enkeling all have soundtracks created like this. With Vlug na Egipte, Stark wanted to create a personal soundtrack for each character and a signature sound for the series.

Stark, the final arbiter, listens to Javan’s compositions, his eyes closed; he is listening for the emotional connection with his characters. This is the final step in a collaborative process that begins with Javan interpreting the script and footage and Stark describing the textures he is seeking.

“We blend the scene in different ways, looking for different intensities and colours,” Javan says, laying down his guitar. He picks up a traditional finger piano, its warm metallic clicks changing the mood. He shakes a plastic egg filled with beads; its sound is used to accompany movement. “We use anything to get as wide a sonic range as possible.”

Music in the first series is sparse two or three note fugues; however, as the plot develops and characters grow the music becomes more pronounced. Soft and tender are the adjectives Javan uses. The music the audience will hear – the pianos, guitars, cellos and violas – begins with two notes strummed on his guitar. “Then maybe we add piano, more notes till it starts to go somewhere.”

His voice is clear, supple as he sings –Rolbos Wys my die Pad – and then he stops. “That’s the challenge: to hold yourself back, to match what you create to the journey of the character,” Javan explains.

Sounds clash, build, fade and tango together as characters move through the world that Stark has created. While Javan is the chief composer (he has written about 1600 separate pieces, he thinks), his work and ideas are supplemented by a team of creative people. “Working in a team has made things easier. I get to operate properly and just focus on the music. I have the luxury of engineers Riku (Latti), Jahn (Beukes) or Adrian (Kritzinger) or (editor) Christa (Lategaan) and Human to bounce ideas off. We’re the first so all eyes are on us so we need to get things perfect.”

The music of the Karoo

The soundtrack is shaped by the music of the Karoo. It’s a mixed bag of langarm (traditional Afrikaans dance music), choral, goema (unique Cape Town minstrel and jazz music) and classical influences. With his history and training on piano, classical guitar and music theory – the foundation, Javan calls it, that began at the age of six – Javan was the perfect choice to create the music. He has played jazz, rock and electronic, teaching himself genres that add to the sounds he creates. “I find it mind-blowing that we can bring so many different music genres together on one stage and create beautiful music.”

Javan today is not the same artist who climbed on stage at 13 to play his own compositions at a school concert. That performance resulted from years of training for “Fifteen minutes of blisssssss,” he says stretching out the last letter ecstatically.

He was a member of the respected Cape Town jazz combo Gramadoelas, and he has recorded and toured in Europe to appreciative audiences. When he returned to South Africa in 2007, he joined his former band mate, Alex van Heerden, at Solms-Delta Wine Estate.

Here, as artist in residence, he helped to set up the estate’s music and cultural programme, Music van de Caab. The programme preserves the rich musical history of the Western Cape wine region and, by providing financial assistance for education, hopes to break the cycle of poverty among the area’s farm workers.

“I also got to name some of the wines,” Javan laughs. Gemoedsrus, one of Gramadoelas’ best known albums, gave its name to one of the farm’s early harvests. There is also Langarm, Hiervandaan and Cape Jazz Shiraz, which are all also the names of some of Javan compositions.

The music created for Vlug na Egipte is haunting and memorable, but it’s not Javan’s first foray into creating music for film. Watch Long Street, director Revel Fox’s 2009 movie, and look out for the guitarist playing in the background in a bar. That guitarist is Javan, who wrote composed the soundtrack for the production. Seeing the movie for the first time, he was struck by the difference compared to playing live. “I’ve listened to myself playing, even the songs I wrote for the movie. It’s a different experience in a movie, hearing my music from those speakers tied to those images on screen.”

His voice is smooth, a pleasant sound. He stands, stretches, fumbles for a cigarette. Even as he enjoys the creative high of the work he is doing he admits to missing live performance. He misses the pause before the applause of a spellbound audience. It is one, he laments, that he has not found in South Africa yet. The hope is, his work on Vlug Na Egipte will bring his music home to South Africans.