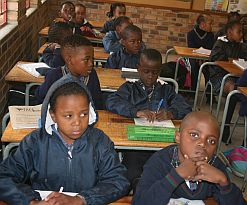 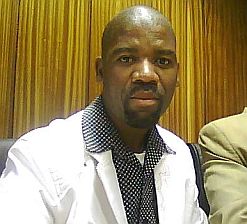 “I want to share information with the community,” Jampane said in an interview. “People need to get important information about development services.”

Jampane is a community development worker stationed at Magogong by the Department of Local Government and Traditional Affairs. He said his concept came from a realisation that there was no publication to provide detailed information about services and other initiatives in Magogong.

In the recent past he used to compile community newsletters that would be distributed in the village, which has about 10 000 residents. “I realised that a website would be effective,” he said.

He came up with the idea of the website earlier in 2010 and by May it was up and running. The Department of Local Government and Traditional Affairs officially launched it at the Magogong Clinic on 21 September.

Jampane created the website through Webs, an international provider that enables communities to set up their own sites for free, and thus help spread information.

A recent campaign to issue identity documents through the home affairs department was one of the notifications put on the website. Community meetings and developmental news, such as upgrades of health facilities, are also published on the site.

Jampane believes that a lack of access to information is to blame for strikes over government services not being delivered in communities.

Schools to gain the most

Although many people in Magogong do not own computers, Jampane hopes they will use internet services at the local post office to access site.

Magogong’s five schools stand to benefit the most from information offered by the site, Jampane said, adding that at least three of them already have operational computer centres.

“My responsibility will be to go to the schools to show them how to use the website,” he said. “It will benefit both the schools and learners.”

Many residents are already using mobile phones to log on to the internet, a trend that Jampane said would increase usage of the site.

Jampane and his team also plan to establish a community computer centre to provide free basic computer training for residents.

Working with other government projects

Jampane has already discussed the potential of the website with communications officers at various other local government departments, whom the project will rely on for up-to-date information. “I hope they’ll be able to help in many ways,” he said.

Ditshaba Makhate, a senior communications officer in Jampane’s department, sees potential for many other government entities to publicise their initiatives on the site.

“We’ll give our support because the website will benefit the community at large,” said Makhate. “I think the initiative is very positive, and it should be encouraged.”