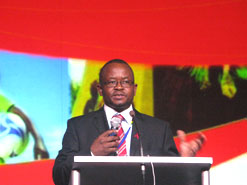 The GCIS’s Themba Maseko spoke about
changing perceptions that South Africans
are xenophobic. 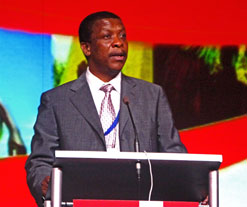 The LOC’s Tim Modise urged delegates to
be bold when telling the African story. 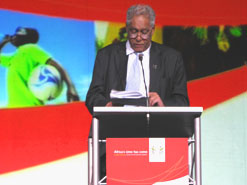 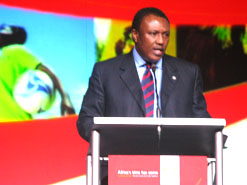 The importance of portraying South Africa and the rest of the continent in a positive light ahead of the 2010 Fifa World Cup was the focus of the third 2010 National Communications Partnership Conference, recently held in Sandton, Johannesburg.

Over 500 delegates attended the two-day meeting on 29 and 30 July 2008, aimed at empowering the media, public relations officers, government communicators and public to use every opportunity to show the world South Africa is ready to host a quality World Cup.

When, on 15 May 2004 the 2010 World Cup host country was announced, President Thabo Mbeki promised the world South Africa would host the most successful tournament ever, saying, “We want to stage an event that will send ripples of confidence from Cape to Cairo.

“We want to ensure that one day historians will reflect upon the 2010 Fifa World Cup as a moment when Africa stood tall and resolutely turned the tide on centuries of poverty and conflict,” he said.

However, getting this message across in the run-up to 2010 is the challenge faced by stakeholders, especially in light of negative publicity on South Africa’s ability to deliver on its promises.

The conference hosted speakers from key sectors involved in the organisation of the World Cup, including government, the 2010 local organising committee, police and security, as well as 2006 Fifa World Cup hosts, Germany.

Co-chairperson of the National Communication Partnership, Nkwenkwe Nkomo, said the conference enabled African communicators to exchange ideas and practical suggestions on how to project a positive image of Africa to the world, using opportunities presented by the upcoming World Cup.

“We wanted to achieve a coherent and action-oriented plan. The conference was also a way to build African solidarity and foster a climate that contributes to African growth and development,” he said.

The keynote address, delivered by Minister in The Presidency Dr Essop Pahad, placed emphasis on the responsibility of the local media to ensure the right messages are sent out to international audiences.

“We see the hosting of the 2010 Fifa World Cup as an opportunity to demonstrate to the world the positive socio-economic developments in our country, our region and our continent. We are confident that global perceptions of Africa and South Africa will change in the run-up to 2010,” he said, adding that communicators needed to embark on a large-scale campaign to “highlight and accentuate the positive” without defending the shortcomings in preparations and in meeting deadlines.

Pahad also challenged the South African media on the negative World Cup coverage from overseas. “Given the power of the media to shape perceptions we need to ask whether the media in our country has the capacity and independence of mind to question news items about our state of readiness which emanate from Reuters, the BBC and so on.”

He tackled what he described as the tendency of South African media to simply perpetuate World Cup pessimism coming from international media. “We are aware that negative stories will, from time to time, emerge in the international media. But the critical question is will the media in South Africa simply parrot those stories or will they be discerning and dig beneath and undertake a critical analysis of what is being said?

“This is not by way of saying that the media in South Africa ought not to be critical of shortcomings in our preparations – they must be critical, for in their responsible reporting they assist us as well.”

Chairperson of the local organising committee and owner of Orlando Pirates football club, Dr Irvin Khoza, spoke of the unifying power of football at the conference.

Khoza assured delegates that South Africa was going to stage an event that would show the ability of sport to cut through race, class, cultures and language.

According to Khoza, there are 1.2-billion people around the world connected to football in some way – from the players on the field, administrators, commentators, sports journalists and the fans. He says the sport has a way of connecting and uniting people, describing it as the “superior reach” of football.

He encouraged the media to shape a clear message to the world that South Africa is going to use the unifying power of soccer to stage a memorable event for all.

City Press newspaper editor Kathu Mamaila called for the media to exercise responsible journalism. He asked: “What is it about us that we want the world to know and how do we become the information leaders when it comes to telling the world about the process of organising the World Cup?” He also discussed his thoughts on who South Africans are as a people

Mamaila encouraged journalists not to be extremist in their reporting, whether their bent was positive or negative. He said the role of the media was not to take a “see no evil, hear no evil” approach when it came to reporting matters on the World Cup.

Echoing minister Pahad’s message, Mamaila said journalists should rather exercise responsible, objective, fact-based journalism. This, he said, could be achieved by reporting on all the shortcomings as they occur, but also by highlighting all the developments taking place.

From glum to glee

Dr Nikolaus Eberl, of the Nation of Champions initiative, gave delegates a picture of how Germany changed the way the world perceived it, by using powerful messages to tell a different story about the Germans ahead of the 2006 World Cup.

“Two years before the World Cup, he said, things were not going well. Germans were described as a collectively depressed people, unemployment figures were at their highest, everything seemed to be going wrong.”

His challenge was to find something within Germans that would unite them, cause them to turn their misery around and focus on what it meant to be German, but most importantly, prepare them for a prestigious world event in their home country.

Eberl’s solution was to teach Germans that they were worth something. The campaign was called “From grumpy to happy” and images of smiling faces were seen on printed t-shirts worn by Germans during a series of organised outdoor concerts. This campaign presented the opportunity for communicators to convey the message to Germans that they were okay, that they had something to offer the world.

Eberl assured South Africa that it had the potential to send across a powerful message of not only South Africa’s but Africa’s readiness to receive the world.

His views were echoed by Themba Maseko, CEO of government’s communications arm, GCIS. Maseko addressed the recent xenophobic attacks on foreigners in South Africa and the negative perception of the country.

He said it was important for the media to bring across the message that South Africa was ready to receive the world. “Xenophobia undermines the freedom that our fellow Africans will have [when attending the World Cup]. We must rally behind all African teams, as this will be an African World Cup.”

He added that it was government’s intention to unite Africans through sport and that the World Cup was the perfect opportunity to do so.

Selling Africa to the world

Tim Modise, the local organising committee’s chief communications and marketing officer for 2010, pointed out that it’s crucial to highlight that South Africa is also ready to host the Fifa Confederations Cup in 2009.

Modise stressed the importance of setting the agenda and using both sport and non-sporting events around the world to market the continent. He gave examples of the World Travel Market, which brings together different countries showcasing what they have to offer, and the 2008 African Cup of Nations held in Ghana earlier in 2008.

Peter Mutie, chairperson of the Public Relations Society of Kenya, made the point that Africans should not sit back and be spectators as far as the image of Africa is concerned, but that Africa should use the opportunity afforded to it like the World Cup, to shape the world’s perceptions.

Mutie emphasised five points that needed to be highlighted – he said that Africans were vibrant, energetic, capable, warm and the continent was “the place to be”. He said it must be stressed that African governments were committed to political stability, that Africa was competent and that it had the ability to draw people from across the social spectrum.

Margaret Dingalo, chair of the marketing and communications cluster in the 2010 National Communication Partnership, made the point that Africa needed to sell as a holistic brand, and be positioned as a world leader. This, Dingalo said, would involve every country on the continent working on its image to show the world its real face.