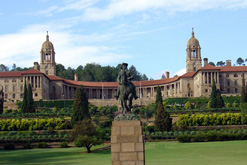 Following the African National Congress’s win in South Africa’s general elections of 22 April, Jacob Zuma is to be sworn in as the country’s fourth president of the post-apartheid era. The inauguration ceremony will take place on the 9 May 2009 at the Union Buildings in Pretoria.

Media arrangements have been made to allow media to effectively cover the event within the space constraints. The following media advisory has been issued by the Government Communication and Information System (GCIS).

Only accredited media representatives will be able to cover the 2009 Presidential Inauguration. Accreditation demand is high and all media organisations are therefore requested to submit their accreditation details based on requirements released by GCIS. See the following websites:

All members of the media who have submitted their details for accreditation should bring their press card, identity document or passport to be accredited.

The media facilities and services for the 2009 Presidential Inauguration are designed to provide the best possible working conditions for accredited media representatives covering the event.

Photography – A photography pool has been arranged comprising of media agencies and media groups. The pool pictures will be available to all photographers via email and in the Media Centre at the Southern Lawns.

The pools have been arranged as follows:

Pool Area: Arrivals from the pavement opposite the Amphitheatre X 8
Media group/agency:

The scribes/journalists will be accommodated on the balcony of the Amphitheatre without their cameras. This includes radio stations broadcasting the event live.

The Media Centre will have all the core facilities needed for media reporting on the inauguration. The centre will be at the Southern lawns of the Union Buildings, Pretoria.

The Media Centre will be run by the South African Government Media Team, staffed with specialist media practitioners including media and event professionals.

The media workspaces will have the following:

Members of the media are advised to bring their laptops and internet connections as the connections are limited. The Media Centre will operate on Saturday, 9 May 2009, at 05h00 until the close of proceedings at 17h00.

Media statements and speeches delivered will be distributed at the Media Centre by the South African Government Media Team.

Media representatives are responsible for their own accommodation arrangements. Media can make arrangements at hotels around Pretoria and Johannesburg.

OR Tambo International Airport is considered the port of entry for all international arrivals.

Members of the media are advised to arrange their own transport for the inauguration. Car rentals are available at the airport.

Media is advised to park at Ritondale Sports Field on Saturday, 9 May 2009, where they will be shuttled to the Union Buildings and later taken back to their cars. The shuttle service will be available when proceedings end. All media are requested to arrive at 05h00 on Saturday morning.