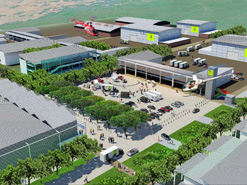 An artist’s impression of the completed
Cape Town Film Studios. 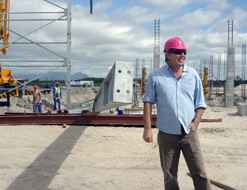 Clouds of loose sand fly about and huge trucks cart in giant steel beams as construction starts on the first of the custom-designed Hollywood-Style studios that will transform 100 hectares of moribund and neglected farmland about 20km east of Cape Town into South Africa’s first Hollywood-style film studio.

Initially called Dreamworld, Cape Town Film Studios (CTFS) has been in the planning stages for a while, but it’s all coming to fruition now, and is expected to be up and running by April 2010.

At a cost of R430-million (US$44.3-million) over a seven year period, CTFS represents a major investment by its main shareholders, Anant Sing’s Videovision, and Sabido Investments, headed by Marcel Golding. The Cape Town metropolitan municipality and the Western Cape provincial government, through its trade and investment agency Wesgro, are each contributing R30-million ($3-million).

The film industry is rapidly becoming a major money spinner for the province. A study commissioned by the Cape Town Film Commission and the city municipality estimated the economic impact of the Western Cape film industry at R2.65-billion ($272.4-million) in the 2005/6 financial year. And about 77% of this, or R2-billion ($205.6-million), was earned within the city of Cape Town itself.

Since the turn of the new century, about 100 movies have been made in Cape Town. Some were pretty small indie productions, but a number of Hollywood blockbusters are among the line-up. Films like Blood Diamond, Lord of War and Ask the Dust saw the likes of Nicholas Cage, Leonardo de Caprio, Salma Hayek and Colin Farrel discovering firsthand the amazing destination that is the city between the mountain and the sea.

And at the moment, Oscar winners Matt Damon, Clint Eastwood and Morgan Freeman are in town filming The Human Factor, a movie about South Africa’s victory on home soil in the 1995 Rugby World Cup and how Nelson Mandela and rugby captain Francois Pienaar came together to inspire the nation, only a year after the end of apartheid.

Cape Town has long been a favourite destination because of its scenery and climate, but it’s not just the mountain, the sunshine, the incredible beaches and the variety of urban environments. International movie makers are now homing in on this destination for the concentrated expertise as well.

So it’s not surprising that CTFS will be marketing itself as a world-class professional film studio that just happens to be in a beautiful place. In fact, many of the movies that will be made there may not even take advantage of the beautiful scenery.

The Hollywood-style studios will give CTFS the ability to host major productions all year round, and the studio is also investigating the possibilities of attracting new technology, such as 3D action film making, to Cape Town.

“3D is the way of the future,” says Nico Dekker, CEO of CTFS. “The major US-based studios are already busy producing a significant number of films in the 3D format, and billions of dollars are being spent to upgrade theatres around the world to accommodate the latest 3D technology.”

Of course the actual studio will only be a small part of the whole centre.

“We’re planning a really interesting tenant mix,” says Dekker. “We want industries that will complement the studio, and we are already negotiating with suitable companies. There will also be a residential sector.”

But it’s not all just about big business. The ground on which the studio is to be built was once farmland, and the surrounding wetland has become severely overgrown with alien vegetation, which has destroyed the delicate balance of the system. It is also fairly polluted.

Before starting construction, CTFS removed tons of litter from the canal that runs past the eastern edge of the lot. The development will only cover 100 hectares, which is about 50% of the total land area. The rest, especially the wetlands, will be rehabilitated.

And it’s not just the flowers and frogs that will benefit. CTFS intends creating a platform for local creatives to market their work to the broader public. It all goes to strengthening the industry.

So Capetonians had better get used to Hollywood A-list celebrities wondering the streets of the city. It looks like they’ll be here to stay.