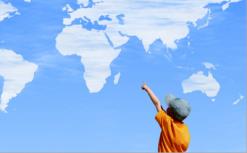 Internet search engine firm Google and partners HSBC and Liberty Global have invested in an ambitious plan to connect people in Africa through a Channel Islands-based project called O3b Networks. The new company’s name hints at the scope of the project – to connect the other 3-billion people on earth who have no internet access.

Greg Wyler, O3b founder, said that coverage will extend between the latitudes of 40 degrees north and south, or from Spain to South Africa. This includes large parts of South America and Asia as well as all South Pacific Islands.

Work has already started on the construction of 16 Low Earth Orbit communications satellites at the facility of Cannes-based Thales Alenia Space, which received the green light in mid-September 2008. Deployment of the satellites is expected to be completed by the end of 2010.

The satellite network will connect to existing cellular towers or WiMax (communications technology that allows wireless transmission of data in a variety of ways) stations to provide connectivity in areas where it is currently not commercially feasible or simply impractical to lay fibre cables.

It is expected that the new system could reduce bandwidth costs for communications operators and internet service providers by up to 95% of current rates, according to Google. This will consequently enable them to offer their customers high-speed access at a low cost. Thales claims that the network will offer speeds of up to 10 Gigabits per second, with a combined total capacity of more than 160 Gigabits per second.

The design of the satellite network allows for its possible expansion at a later date, since the height of its orbit clears it from other space traffic and insertion of extra satellites is possible. The project’s cost is estimated at $750-million, while initial equity of $65-million has already been raised by O3b’s group of backers.

Changing the face of telecommunications

Google, meanwhile, is currently engaged in a global expansion drive and is taking up the cause for more widespread internet access, as this will also aid the company in its bid to increase its user base.

“An important aspect of Google’s mission is to make information universally accessible,” said Larry Alder of Google’s Alternative Access Team. “Unfortunately, in many less developed areas of the world, particularly in Africa, access to the internet is scarce and expensive.”

Alder noted that because the O3b network will comprise a network of medium-orbit satellites, data can be quickly transmitted to and from even the most remote locations, such as land-locked African countries or small Pacific islands.

“The satellites will orbit the earth at about one-third the altitude of a geosynchronous satellite, which means it takes less time for data to travel up and back,” he commented. “This low latency translates into better voice connections as well as a snappier web experience.”

The project has been welcomed by South Africa’s current Minister of Finance Trevor Manuel. Speaking in early September at a conference in Berlin, Germany, on the United Nations Millennium Development Goals, Manuel said that any initiatives that strive to close the information gap must be supported.

In South Africa it is estimated that just 11% of the population of some 47-million has internet access, out of around 1.5-billion internet users around the world.

In a related story, Google has just released the first of its gadgets developed especially for South Africa. Gadgets are small applications that can be embedded on an iGoogle home page or Google-enhanced desktop – and there are more than 30 000 to choose from, ranging from functional to frivolous.

The gadget collection was developed by Quirk e-Marketing, which has already collaborated with Google in the development of the local Google Maps layer for South African Tourism.

Google operates a South African office and has worked with local developers on a number of occasions. In addition to Google Maps, iGoogle users can give their home page that special South African touch using the Madiba theme created by artist and designer Desré Buirski, known for her casual yet stylish shirts custom-made for former South African president Nelson Mandela.

South Africa has been represented at projects such as the Google Summer of Code, while 16-year-old South African computer scientist Federico Lorenzi was a recent grand prize winner in the Google Highly Open Participation Contest.

The first set of South African-centred gadgets allows users to convert the South African rand to any currency, or become more knowledgeable about South African proverbs or the colourful local slang.

According to Google, the purpose of creating the first four South African gadgets is to inspire the creation of many more South Africa-specific gadgets by users, students and developers.

“We know the creativity is out there,” said Marion Gamel, Google marketing head in South Africa. “We aim for iGoogle to become the obvious, useful, personal, and fun base from which a satisfying internet experience happens for South African users.”