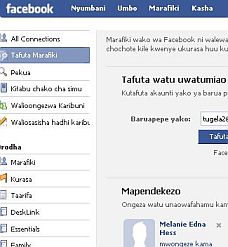 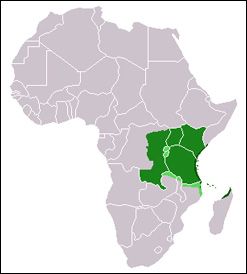 The areas where Swahili or Comorian is
the indigenous language (dark green),
official or national language (medium
green), and trade language (light green).
As a trade language, it extends some
distance further to the northwest.
(Image: Wikimedia)

Swahili has joined Afrikaans as the second African language to be available on Facebook, the massive social networking site with 200-million members worldwide – and growing.

Facebook is now translated into 50 languages, with 40 more in development. The translations are done by volunteers.

With 70% of its members now located outside the US, the California-based company aims to reach users in their own languages.  It is also significant that 30-million Facebook users use their mobiles to connect, because cell phones are far more commonly used than computers in the developing world. More than 150-mobile operators in 50 countries work to deploy and promote Facebook mobile products, according to the company.

Still, the penetration of the web in Africa is miniscule: 5% compared with 74% for North Americans.

Currently 1.4-billion around the globe use the internet. According to the Financial Mail, of those 578.5-million live in Asia, 384.6-million in Europe, 248.2-million in North America, 139-million in Latin America, and 51-million in Africa, with 10-million of those living in Nigeria and 5-million in South Africa.

There about 110-million Swahili speakers in Kenya, Tanzania and smaller numbers in Uganda, the Democratic Republic of Congo,  the Horn of Africa, Mozambique, the Indian Ocean islands and Malawi.

Next in line for African languages to be translated include the Hausa for West Africa and isiZulu for South Africa, developments expected to happen in the next few weeks.

In Kenya, Facebook is in the top 10 of the most-visited sites, while it ranks third in Egypt.

Facebook is hugely popular in South Africa, where its users are approaching 1-million. South Africans use the site to connect with friends – including those in the diaspora – as well as to rally against crime and celebrate their varying heritages.

The groups range from “One Million People against Crime in South Africa” to “We are the Rugby World Champions”.

In other parts of Africa, Facebook groups include the quixotic. Somali pirates turn up 139 citations, with one group attracting more than 3 000 fans.

When Facebook makes a new language available, it does not automatically switch users to the new language unless their browser settings are already set to that language, Facebook spokesperson Elizabeth Linder said in an interview.

“Our hope is that the number of languages on Facebook will enable … users to connect with their friends, family, and co-workers in the language they feel most comfortable using.”

Henry Louis Gates Jr, the African-American Harvard scholar, has proposed Swahili as the lingua franca of Africa. Gates has chronicled the origins of the language in his book and television series Wonders of the African World.

“The language is heavily influenced by Arabic – a result of the long-standing trading relationships in the region – while many contemporary words are adapted from English. The main dialects of Swahili, or Kiswahili, as it is also called, are Kiunguja, Kimvita, and Kiamu,” Gates writes.

“Swahili has a long tradition of literary production, and poetry has been written in Swahili since at least the middle of the 17th century. It draws on Arabic, Persian, and Urdu literary sources.

“Though Swahili was originally only written in Arabic script, Latin script became more popular in the mid-19th century, and has since become standard.”

According to Gates many Western literary works have been translated in Swahili, such as the well-known readings of William Shakespeare’s plays by Julius Nyerere, the first president of Tanzania.