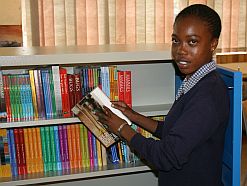 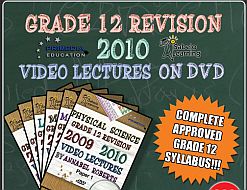 A copy of the educational DVDs that Lead
SA is donating to 100 public schools.
(Image: Primeducation)

Lead SA, the new nation-building campaign, has set up a scheme to distribute educational DVDs to 100 schools in some of South Africa’s underprivileged areas.

The syllabus revision DVDs, worth about R1-million (US$135 352), will be donated to public school matriculants in KwaZulu-Natal, Gauteng and the Western Cape provinces. Pupils will use them to prepare for their upcoming final examinations.

Lead SA was established in early August 2010 by Primedia and Independent Newspapers, and has a broad focus – including wildlife protection. On 23 August it hosted a summit to help fight rhino poaching in the country.

By watching the DVDs, pupils will be able to grasp and revise contents from past lessons, said Lead SA.

“Primeducation aims to positively influence and uplift the standards of education in South Africa by utilising digital technology that provides learners and educators with new, innovative and affordable learning as well as teaching materials,” said Issie Kirsh, Primeducation chairperson.

“By collaborating with Lead SA, we hope to reach this goal, to support the forthcoming matric examinations.”

The Department of Basic Education will distribute the DVD sets, including teacher training booklets, to the schools. “These DVDs are certainly going to make a difference to both learners and teachers,” said Terry Volkwyn, CEO of Primedia Broadcasting.

The public and other companies have been called in to expand the educational programme, and take it to the remaining provinces in the country. “There are so many schools that need this kind of material, so we really appeal to corporates or individuals or any institution that can help,” said Talk Radio 702 station manager Pheladi Gwangwa.

It’s less than two months before South African matric pupils begin their final national examinations, and the Department of Basic Education has already released a timetable. The exams will start on 25 November and end on 3 December.

The department said the schedule will not be changed, but the examinations could be delayed due to an ongoing, nationwide public workers’ strike – which has kept government teachers away from schools for more than two weeks.

Although it’s no replacement for classroom learning, the department is distributing revision material through radio stations, television, the internet and newspapers to help matriculants and other pupils prepare for their exams. It started doing this before the strike started.

The stay-away has not yet been called off, but schools remain open across the country and some pupils have even formed their own study groups to ensure they don’t fall too far behind. Teachers who are not part of the strike have also been working.

Despite the instability, the Western Cape government announced that the September preliminary exams will go ahead as planned. “I am determined to ensure that the September exams continue as scheduled. I encourage parents to continue to send their children to school, especially Grade 12s, at this critical stage of the year,” said the province’s Education MEC Donald Grant.