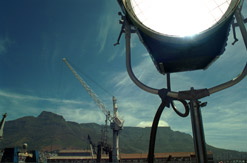 On the set of a 2004 German film
production in the Cape Town harbour, with
the city’s iconic Table Mountain in the
background.
(Image: Rodger Bosch,
MediaClubSouthAfrica.com. For more free
photos, visit the image library.)

Clint Eastwood, Morgan Freeman, Matt Damon … top box office earners are headed for South Africa in 2009, as Cape Town ramps up its growing reputation as the Hollywood of Africa.

The city has been an increasingly popular location for filmmakers since South Africa was welcomed back into the global community in 1994. Over 50 major productions – feature films and TV series – were shot in Cape Town in the five years from 2003 to 2007, including Blood Diamond, Rendition and 10 000 BC. In 2008 no less than 22 productions were filmed in the city.

Clint Eastwood is to direct The Human Factor, an adaptation of John Carlin’s book The Human Factor: Nelson Mandela and the Game that Changed the World. It tells the story of South Africa’s victory, on home turf, in the 1995 Rugby World Cup, when Mandela and rugby captain Francois Pienaar united to inspire reconciliation between black and white South Africans – only a year after the end of apartheid.

Mandela is to be played by Morgan Freeman, whose previous productions include The Dark Knight, Evan Almighty and Lucky Number Slevin, while Oscar-winner Matt Damon – star of The Departed, Ocean’s Thirteen and The Bourne Ultimatum – will play Pienaar.

Cape Town’s appeal is partly because it’s the most beautiful city in the country, with excellent and varied locations. The city has long been South Africa’s top destination for international tourists and, to the irritation of most Johannesburgers, wins global popularity contests hands down. Cape Town has received numerous travel awards, and in 2008 was named the top city destination in the world in a survey by the UK’s Telegraph newspaper – ahead of Paris, London and New York.

But its success as a film location is also due to the Cape Film Commission (CFC), which markets the city to moviemakers and smooths the way for them to operate there.

“We have often been told that we are too ambitious and lack the necessary skills and infrastructure,” says Laurence Mitchell, commissioner of the CFC. “But it has now become apparent that indeed we have the capacity to become a global film destination.”

The only other African country with a flourishing film industry is Nigeria, but “Nollywood” only produces low-budget, non-studio productions shot on video, movies which are often quickly pirated after release.

Seven major productions have been scheduled for Cape Town so far this year, including The Human Factor, a number of Bollywood production, and South Africa’s second full-length computer-animated feature. The country’s first major animated movie, The Lion of Judah, was also filmed in Cape Town, with production wrapping up in November 2008 and international release scheduled for later in 2009.

The city is a Bollywood favourite, with films such as Seasons Greetings, Life Partner and 8 by 10 (Tasveer) produced there in 2008. It’s also a popular for international commercials – brands whose adverts have been shot in the city include Peugeot, BMW, Nivea, Oreo, Coke and Hansa.

Big earner – and getting bigger

In 2006 an economic impact assessment revealed that the Cape film industry contributed some R3.5-billion to South Africa’s gross domestic product. Mitchell estimates that this has now risen to over R5-billion. It is estimated to employ some 20 000 people.

To build on this success, the CFC is set to launch a number of new initiatives in 2009.

“Cape Town and the Western Cape are set to become global film industry destinations,” Mitchell says, “and 2009 will be a crucial year during which we will have to up our game as the rest of the world would have taken notice.”

In March the CFC is to launch an online location service, the first of its kind in South Africa. The website will be a one-stop shop for location scouts across the world, allowing them to access images of public and private open space in Cape Town, as well as private residences made available by recognised location agents.

It will also provide GPS maps, and information on legislation, regulations and registration processes. Its functionality will allow users to shortlist locations online, identify location contacts, and search for specific locations in Cape Town and the Western Cape by selecting a region or a type from the category list.

Over the next six months the CFC will also be working closely with Cape Town Metropolitan Municipality’s Film Permit Office to develop an online location permit system, the first of its kind for local authorities in South Africa.

To make the work of filmmakers easier and safer, the film commission will work with various local authorities to set up dedicated units of traffic and event marshals. And in the next few months the CFC will launch the Cape Film Industry’s Green Campaign, aimed at improving the environment-friendliness of the sector.

An important part of the commission’s new strategy is promoting animation, which it sees as a key growth area in Cape Town’s movie industry. The CFC and Animation South Africa, the representative industry body, have entered a public-private partnership in which they will collaborate to market, develop and support the local animation industry.

Named the Animation Industry Development Initiative (Aidi), the partnership aims to improve animation skills and grow the industry over the next 10 years to the point where it is able to employ 10 000 animators at a given time. Its first project will be setting up the Animation Satellite Resource Centre in the Khayelitsha and Mitchells Plain area – the poorer regions of Cape Town. Recruitment to the centre will begin in February.

Another serious boost to the local film industry will be provided by the 2010 Fifa World Cup, to be held in South Africa with Cape Town one of the nine host cities. The CFC has already started to map out projects to prepare the film and TV industry for the football spectacular.