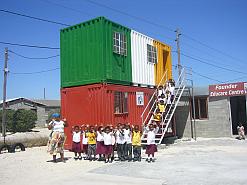 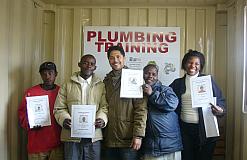 The proud and happy graduates of the first
Cans4Skills development course. 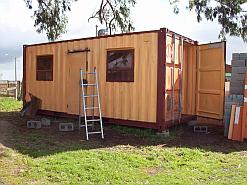 A container classroom renovated by
Breadline for foreign nationals at the
Soetwater refugee camp, set up after the
outbreak of xenophobic-related violence
in May 2008.

The ingenuity of an African NGO is raising international awareness for the plight of Africa’s millions of starving people, and harnessing the power of the internet to drive its newest project.

Cape Town-based Breadline Africa is an NGO that aims to give Southern African communities the means to break out of the trap of poverty. The organisation is involved in many community-based projects in three main categories – skills development, assisting youth and children, and health and nutrition.

Breadline Africa launched its latest initiative in October 2008. Using the power of consumer generated media – posts made in all kinds of online media such as blogs, wikis, discussion lists and forums – the World Blogger Bake-Off is a global call to bloggers to join the fight against hunger in Africa by collectively raising R11-million ($1-million).

Bake bread or give dough

Breadline Africa’s partner in the World Blogger Bake-Off is Quirk eMarketing, responsible for the NGO’s e-marketing strategy. Quirk is known for its involvement in projects such as the recent Google Earth layer for South African Tourism.

The World Blogger Bake-Off encourages bloggers from all over the world to get involved in Breadline Africa’s fight against poverty in various ways. These range from promoting the initiative by blogging about it, pledging and challenging fellow bloggers to do the same, hosting bread and cake sales in their areas to raise funds, uploading a bread recipe, and generally spreading the word amongst the online community.

Non-bloggers may also become part of the campaign by uploading their favourite bread recipe into one of three categories – most nutritious, most unusual and best traditional recipe.

The blogger responsible for the most money donated will receive an Amazon voucher worth R5 600 ($500) and will have a container kitchen named after them or their blog, while the most popular recipes in each of the categories will receive Amazon vouchers to the value of R2 800 ($250).

Bread was chosen as the project’s theme because it is the staple food of millions of people in Africa and around the world. Many of these people live below the poverty line and have to endure the associated problems of unemployment, hunger, disease, violence and despair. By supporting charity projects run in the heart of communities, and helping them to reach a level of sustainability, Breadline also helps to reduce the need for welfare.

Breadline Africa works by gathering and disbursing funds to convert old shipping containers into functional, sustainable, community-uplifting projects such as soup kitchens, classrooms, and nursery schools. Not only do the containers provide an essential service in disadvantaged areas, but they also offer a platform for skills development in communities.

With offices in both South Africa and the United Kingdom, the organisation acts a bridge between the needy in Africa and donors in Europe and the UK. Since its inception in 1993 it has supported over 130 projects in Southern Africa through annual grants. Breadline also participates in the Multi-Agency Grants Initiative, which aims to bring donor partners together to share resources and thus more effectively support community based organisations.

Project manager Edna Titus says that the organisation sometimes struggles to find containers, as they are not that easy to come by and shipping companies are strangely unwilling to freely donate old containers, however battered, rusty and unusable they may be. This forces the NGO to use some of its funds for purchasing.

“Shipping companies only seem to donate directly to communities,” says Titus. “This ties our hands somewhat because they often retain ownership of the container and that hampers us even from renovating it on the community’s behalf.”

Old shipping containers are often found in communities masquerading as anything from telephone booths and hair salons to spaza shops. The Breadline difference is that they are completely renovated and are no longer merely cold, drab, windowless boxes. “We beautify the containers and make them user friendly,” says Titus, “and even their bright colours give the area a boost.”

While community projects may use the containers for as long as they remain successful and sustainable, if they should fold the container reverts back to Breadline who will then pass it on to another worthy project. “But this happens very rarely,” says Titus. “We scrutinise our potential projects very carefully and choose the ones which we believe will succeed.”

Breadline Africa also runs a very successful poverty alleviation and skills development programme called Cans4Skills, centred on the container renovation and working on the principle that people become independent by learning to help themselves.

Skills development in South Africa is a cause espoused by many organisations as well as government, as it is one of the main factors in the country’s unemployment rate.

Cans4Skills takes its name from the communities’ name for containers, and Breadline Africa uses containers, or cans, to provide opportunities for people in informal settlements to hone trade skills such as plumbing, bricklaying, woodwork and painting – practical skills which can be passed on for the benefit of the community. The company also teaches basic domestic tasks including cooking, ironing and using a washing machine.

The containers are cleaned and spruced up with a floor, windows and doors and a coat of paint, transforming them into classrooms for those who cannot afford to attend a college or don’t have transport to get to one. Bringing the classroom to the people and teaching them in their own environment, says Titus, is an effective way of giving them a kick-start in earning an income.