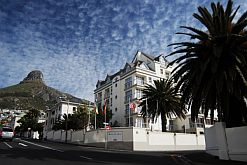 Another high-profile Bollywood film, featuring some of the Hindi film industry’s most popular stars, is taking shape on the streets of Cape Town – and regional government hopes there will be many more to follow.

The police action comedy No Problem, directed by Anees Bazmee, has also taken the superstar cast to various locations in KwaZulu-Natal.

Dutt, who turned 50 while filming, celebrated his birthday at a quiet gathering in Cape Town with family and friends.

The calibre of Indian stars visiting South Africa’s shores lately is good news for the city, the province and the country. This is in part due to the efforts of the Cape Film Commission, which has implemented a long-term plan to market the Western Cape as an attractive film location.

During a recent visit to the No Problem set, Cape Film Commission CEO Laurence Mitchell expressed his delight that the hard work of the past five years, aimed specifically at pulling in big film productions, is now reaping rewards.

“The production of No Problem on our shores has already had significant spin offs,” said Mitchell, “with at least 80 local people being employed as crew and cast members.”

Other industry sectors that have benefited include catering, transport and security services. Cape Town hotels have also received a big boost, said Mitchell, with the accommodation of cast and crew accounting for over 2 000 bed nights in less than a month.

Later in 2009 the Cape Film Commission is due to travel to India to market the local film industry in the subcontinent, and interact with Bollywood bigwigs.

The good favour of the super-lucrative Bollywood film industry is a huge boost for Cape Town, and indicates that the local film industry is poised to contribute significantly to regional economy.

The US$6-billion (R47-billion) Indian film industry churns out over 1 000 films every year. Of those, the Hindi and Telugu film sectors account for about 300 films each, with the remainder shared among other languages. However, Hindi films bring in half of the industry’s total annual revenue.

Provincial Minister of Finance, Economic Development and Tourism Alan Winde, who accompanied Mitchell to the set of No Problem, was optimistic that the local industry could handle the challenge. “In order to ensure that we grow this contributor even further, we need to make sure that our service offering, whether in tourism or film, is exceptional.”

Winde attributes the ongoing presence of Bollywood’s leading men and women to the fact that Cape Town is recognised as a global film industry destination. He added that the province was now setting its sights firmly on the potential of the Indian and Middle Eastern film markets.

Cape Town has recently played host to casts and crews from the romantic comedies Seasons Greetings and Life Partner, psychological thriller Tasveer, action comedy Cash, and the horse-breeding film Race, among others. Race went on to become the fifth most successful Bollywood film of 2008, in terms of revenue.

And the country gets the thumbs-up from the stars themselves. In 2006 Anil Kapoor was appointed as global brand ambassador for South Africa by South African Tourism. Big names such as Akshay Kumar and Govinda are regularly seen enjoying the Cape Town ambience.

Kapoor said that with Cape Town’s unique offerings of locations, weather, culture and world class services, the city would become a magnet for large Bollywood productions.

Sunil Shetty told the Sunday Times Extra that he believes his films have been such big hits because many of them were filmed in South Africa.

“I’ve loved South Africa from the first time that I came here. The things I love most about the country are its beauty, food, particularly the seafood, Nando’s chicken, beautiful terrain and fantastic weather,” enthused the actor, adding that South Africa is also his favourite holiday destination.

The success of the tournament has added to expectations that Cape Town will become the African base of the Bollywood machine.

According to Winde, the province received huge exposure in India because of the IPL. “Images of our country were beamed into the homes of millions,” he said, “and this provided the Western Cape with a wonderful opportunity to access this significant tourism and film market.”