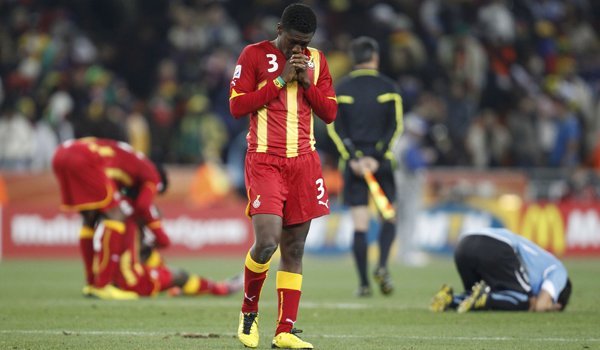 In 2010 Ghana missed becoming the first African country to reach a semi-final now Asamoah Gyan and a new golden generation hope to push on from that heartbreak. (Image: Fifa)

see match-ball turn to damson on his foot,
swell as if too ripe, then shimmer back
into its shape. Watch the sickly fruit
fall sideways waist-high, and our keeper’s
weightless, fruitless dive begin with arms
raised like a saint in rapture.
Replay slower: thirty million eyes draw
the ball onto his laces. Left foot
becomes fulcrum, weighs up past and future.
Slower: geological, the shift of leather
against leather. This way faults are formed,
continents are realigned forever.

Michael Symmons Roberts is an award winning poet and Manchester United fan. He wrote those words after watching his beloved team lose to Bayern Munich. The lows are a deep trough, the highs stratospheric. Football does that; it allows you to grow wings, take off on fanciful flight and dream of overcoming the odds. Eleven men wearing the national colours become the incarnation of a nation’s hopes, dreams and identity.

The World Cup is the ultimate embodiment of that. Stadiums become churning, heaving cauldrons of sound and fear. They are raucous, intense and when a pass is just right, or a tackle too boisterous or a goal flawlessly perfect, the adrenaline sucks the air out of the arena. It’s a harsh atmosphere that demands nerves of steel earned over time.

Brazilian legend Pele believes an African team is ready to win the Jules Rimet Trophy but in Brazil, where the World Cup begins on 12 June, continental teams have the youngest squads with the least experienced line ups. There are players, part of a new golden generation of talent, who will one day make that prediction come true.

For our incomplete list we overlooked established stars – the likes of Samuel Eto’o, Didier Drogba, John Obi (Mikel) and Michael Essien – who have proven their ability at the very top of the game.

At 24, Cameroon’s Nicolas N’Koulou has become a key player in the Marseille defence. Success in France has attracted the attention of bigger clubs like Sevilla, Atletico Madrid and Arsenal. A defender comfortable with the ball at his feet, he combines power and strength with blistering speed. Tough and competitive, his performances have not been as impressive for the Indomitable Lions, but on the biggest stage with the world watching, the athletic defender at the heart of Cameroon’s defence should live up to the talent that saw Napoli bid £12-million (R216-million) for him in January.

When Efe Ambrose is on holiday back in Nigeria, the Celtic defender wakes at 6am to play football with his friends. He calls these friendly games his pleasure in life and it is a sign of the love the 25-year-old defender has for the game. His calming presence and passion will be the difference between Nigeria making it out of the group stages, a possibility if Ambrose can manacle Lionel Messi as he did when he played against him in the Champions League, or not.

When you talk about legendary African players the name Rigobert Song will always come up, and the Cameroonian defender’s retirement left a hole in the national team’s defence. That hole has been filled by a 22-year-old playing for Schalke in Germany – Joël Matip. He is tall, strong in the air and intelligent, and is talked about as a future captain of Cameroon. Born in Germany, he is the son of former Cameroonian international Jean Matip. The young Matip is a tough tackling, powerful and versatile attacking defender.

Just as Song gave way to Matip, so Emmanuel Eboue give way to Serge Aurier in the Ivory Coast defence. Aurier’s energy, strength and drive have meant he has played at right back for Toulouse and the Ivory Coast. He has the powerful physique of a central defender and has deputised there on occasion. Aurier goes to Brazil knowing that a decent performance will seal his move to Arsenal, where Arsene Wenger sees him as the perfect replacement for the departing Bacary Sagna. Like Sagna, Aurier is a ferocious tackler whose speed gives Les Elephants an additional attacking threat.

At the tender age of 21, Kenneth Omeruo will be starting all of Nigeria’s games at the World Cup. Signed by Chelsea when he was just 18, he has never played for the English club but was the star of Nigeria’s 2013 Nation’s Cup winning side. Calm under pressure and talented with the ball at his feet, powerful Omeruo is one of the best African defenders in the world right now. If Nigeria are to advance, Omeruo’s unflashy and steady influence will be a big reason for their success.

When the pundits call you the African Messi you either cave under the pressure or blossom. Ghana’s Christian Atsu living up to the hype. A Chelsea player plying his trade in Holland with Vitesse, his goals in qualifying are a big reason. He scored on his debut for the Black Stars and if they repeat the heroics of 2010, when their road to a semi-final place was blocked by the hand of Uruguay’s Luis Suarez, Atsu will have to live up to his reputation.

Sofiane Feghouli helped French side Grenoble win promotion to the top league when he was just 17, and earned him comparisons to Zinedine Zidane. Algerian Feghouli is the heartbeat of a Desert Foxes team that commentators call honest grafters. He is the touch of class, the dead ball specialist with the skill, guile and vision to unlock any packed defence. Algeria’s game plan in Brazil consists of getting their twinkle toes on the ball as often as possible to give him the opportunity to show his undoubted talent. 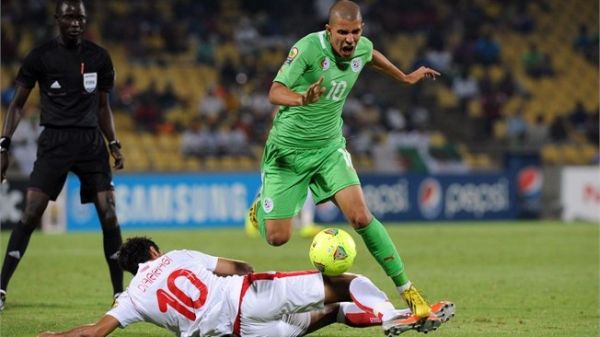 Sofiane Feghouli is not the new Zidane, he is the Algerian Feghouli. (Image: Fifa)

Feghouli is the star but Saphir Taider is the heartbeat of the Algerian squad in Brazil. The right winger’s technique, stamina and fitness means he will run all day for the team. Like the Algerians who embarrassed Germany in 1982, it is Taider’s enthusiasm that gives the Desert Foxes a fluidity and determination that is hard to beat.

You know you are important to a nation’s football fortunes when the president of your country asks you to reconsider your retirement at the age of 23. Andrew Ayew is Ghanaian football aristocracy; his father is Abedi Pele, whose troubled relationship with the national coach almost plummeted the country into a state of mourning. The prodigiously talented winger is talked about as the future of Ghanaian football, and is considered more important than Michael Essien, Sulley Muntari, Asamoah Gyan and Kevin-Prince Boateng. A wing for his club side, for Ghana he plays through the middle, controlling and directing the game. 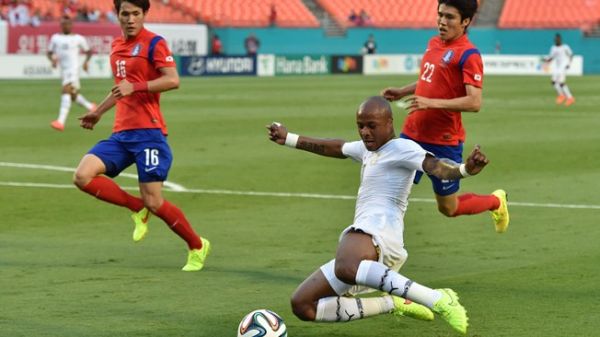 In 2014 Ghana’s hope lie on the shoulders of its golden son, Andrew Ayew. (Image: Fifa)

Kwadwo Asamoah is flair and productivity rolled into one athletic package. The Ghanaian midfielder made his national debut at 17 and was immediately compared to the legendary Abedi Pele. Ghana use a 4 – 3 – 3 formation that plays to his attacking strengths and allows him to charge forward in support of the striker. He can shoot with either foot or whip in a cross and has a powerful shot that requires very little back lift. This makes him difficult to defend against and allows Ghana to attack from anywhere on the pitch.

Ivory Coast’s Wilfried Bony has big shoes to fill at the World Cup. Les Elephants’ Didier Drogba is the man standing between him and a start in Brazil, but with 25 goals in the Premier League with disappointing Swansea, the intense and self-assured Bony believes he will be a star in Brazil. He began life as a defender for his home club team in Abidjan, before being invited for a trial with Rafa Benitez at Liverpool, and it is this past that makes him deadly in the penalty area.

The youngest player in Brazil will be Cameroon’s 18-year-old striker, Fabrice Olinga. Breaking age records is nothing new to the boy often called Samuel Eto’o’s heir: he was just 16 when he became the youngest scorer in the Spanish top flight when he scored for Mallorca. Olinga, a product of the Samuel Eto’o Foundation football school, is a raw, strong talent, equally capable of running at defenders or into the channels. He is living his dream by partnering his hero in attack at the World Cup. 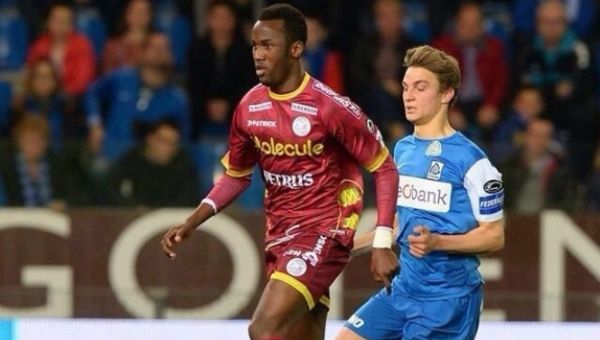 The youngest player in Brazil, Fabrice Olinga, hopes to leave with a higher profile. (Image: Fifa)

Luis Suarez is never likely to have his lobster pizza at Bella Roma in Accra, Ghana, comped. Not after his hand prevented the Black Stars from becoming the first African team to make the semi-finals of the FIFA World Cup. The hot-headed chef is more likely to charge out of his kitchen, cleaver in hand – as he has been known to do – to wipe the toothy smile off Suarez’s face. Football inspires those kinds of emotions, and never more so than at the World Cup.

Those bitter memories linger for Ghana – and the rest of Africa, who adopted the team as they went on their amazing run in 2010. Revenge against Senor Suarez will only be possible if the teams meet in the semi-finals, a target becoming more and more real for Africa thanks to a generation of players growing up with success rather than valiant defeat on which to build.