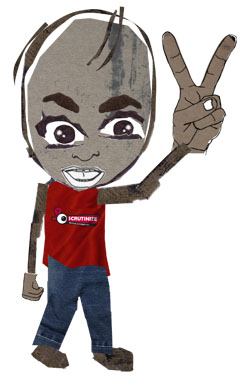 “Victor the taxi driver” the lead character
in the Scrutinize series 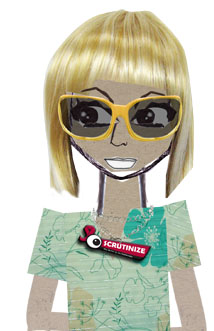 The young girl must learn life lessons
from the other characters
images: Scrutinize

A series of new animated commercials has been launched in a bid to communicate the HIV/Aids message in an innovative yet authoritative way. The Scrutinize campaign speaks to the young adult market in a fun yet fact-based and engaging manner.

The campaign is the brainchild of a partnership between USAid, the Johns Hopkins Health Education in South Africa (JHHESA) and designer jeans label Levi’s. Backed by funding from the US President’s Emergency Plan for Aids Relief, the three organisations teamed up with South African creatives Matchboxology who created the entire animated series.

The series makes use of characters from the township that the youth can easily relate to. Each of the animated commercials, known as animerts, is about 40-60 seconds long and is based on the everyday realities that place young South Africans at risk of HIV infection.

The underlying strategy behind the campaign is to equip young people with the knowledge to take responsibility for their own actions, as a means to reducing their risk of HIV infection.

Patrick Coleman, managing director for JHHESA, who has more than 30 years experience in public health communication, says he believes the reality of the series makes it very persuasive, “Scrutinize uses South African slang and symbology with the [same] kind of humour that makes shows like The Simpson’s so popular around the world,” he says.

“People laugh because they can see themselves, but you can see in their eyes they are getting the message.”

The lead character is taxi driver named Victor, created in collaboration with top South African comedian Joey Rasdien. Victor is on a mission “to flip HIV to H-I-Victory”. Rasdien is joined by a cast of four other local actors and comedians. The characters include a shebeen queen (a female owner of a small drinking establishment, usually in her home), a sugar daddy (an older man who dates young girls), a young girl, a businessman, and a teenage boy.

Debbie Gebhardt, marketing director for Levi Strauss South Africa, says the creative use of multi-media gives the campaign a cutting edge, “We brought together commercial marketing and merchandising techniques, modern advertising creativity and hard epidemiological data with expertise from JHHESA and USAid.”

The first eight animerts will be flighted on local television in South Africa for a period of a year. The aim will be to reach target audiences during peak hours and at times when youth programmes are broadcast.

The campaign will also be taken to local communities, where the commercials will be used as discussion starters for a series of planned youth conversations around issues of HIV/Aids.

Focus is on urban township youth

Director of communications at JHHESA, Richard Delate, says the campaign focuses on youth in South Africa’s black urban townships as their research has shown that this is where the spread of the HIV/Aids is most rife.

He says part of the contributing factor to the spread of the virus is the prevalence of multiple and concurrent partners. This means that while a person may have a steady partner in a long-term relationship, they also have multiple partners on the outside. These partnerships usually overlap, forming a type of sexual network.

While condom use amongst non-regular partners is high, it tends to become inconsistent and eventually decreases over time with the regular partner. This then puts the partners at a higher risk of contracting the virus.

If one of the partners within the network gets infected with HIV, the virus spreads rapidly to others, as HIV is most infectious during the first three to six weeks after infection.

According to the First National South African HIV/Aids Communication Survey conducted in 2006, 13% of young men and 4 % of young women between the ages of 15-24, reported that they had concurrent partners. This survey also found that youth falling into this age group have a greater chance of being involved with multiple and concurrent partners.

Multiple and concurrent partnerships may also involve the exchange of material goods and status between a man or a woman better off economically, and a younger partner who isn’t. The younger partner is expected to give sexual favours in return to the “sugar daddy or sugar mommy”.

For example, a girl may have three boyfriends, each of them catering to different aspects of her life. “Minister of transport” refers to the partner who provides her with transport to get around. It could be a guy with a car that fetches and drops her off at her destination of choice, or a taxi driver who lets her ride for free.

“Minister of finance” refers to the man who offers her financial assistance. He may pay for her clothing accounts, her hair and in other instances, even her accommodation. “Minister of gigs” often refers to the man that provides entertainment. He takes her out to the nightclubs, to dinners and basically pays for their social life. The girl would usually sleep with all three men concurrently, increasing the spread of the virus.

The Scrutinize campaign ultimately aims to empower young people with knowledge that will help them eradicate behaviour which places them in the high-risk category of contracting the virus. Levi’s will also feature the characters on T-shirts as part of their Red for Life range in shops nationwide.