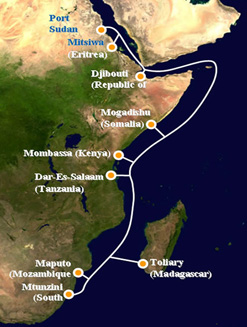 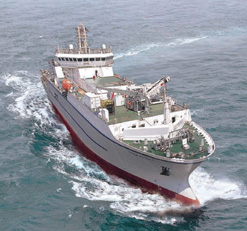 Africa’s broadband internet access will soon be a whole lot cheaper and faster, thanks to the construction of several new undersea fibre-optic cable systems. These will offer increased online capacity and, by driving down the price of doing business on the continent, will boost economic growth.

Three projects are under construction, while one is still in the paperwork stage. They are the East African Submarine Cable System (Eassy), the SEA Cable System (Seacom), The East Africa Marine System (Teams), and a project initiated by the New Partnership for Africa’s Development (Nepad), respectively.

Broadband access in Africa is limited, and where it is available users pay some of the highest prices anywhere in the world. This is because the continent has only one major fibre-optic cable – the SAT3 cable, which stretches from Portugal to South Africa and then out to Asia. This
28 000km-long cable supplies connectivity to West and Southern Africa.

East Africa has no cable at all; users there depend on satellite, which is slow and expensive, for their connectivity. As a result internet access in the region has been severely limited, as has business growth.

The Association for Progressive Communications says that new call centres, for instance, are unable to compete globally, and the high price of broadband access is a limiting factor for professionals, students, decision-makers and the ordinary citizen.

Although a fibre connection is cheaper than a satellite connection, the SAT3 cable is controlled by a 36-member consortium that has used its position to keep prices high. Of the 36 members of the consortium, 12 are African, and the managing agent for Africa is South Africa’s fixed line operator, Telkom.

The Seacom cable will connect with South African soil near Richards Bay, north of Durban in KwaZulu-Natal, and is expected to go live in June 2009. The marine survey is complete and Seacom is going ahead in spite of a slight delay caused by Department of Communications demands that any undersea cable landing in South Africa must have majority African ownership.

Seacom president Brian Herlihy said in February 2008 that construction, which began in November 2007, was on track for a “dead-certain delivery date” – just in time for the Fifa Confederations Cup that takes place in South Africa in June 2009, and later, for the 2010 Fifa World Cup.

Seacom will cost US$650-million and run for 17 000km to Mumbai in India and Marseille in France via Mozambique, Madagascar, Kenya and Tanzania. The underwater portion of the cable is around 13 500km. It is anticipated that the price of international bandwidth will drop dramatically once the cable is up and running – Seacom has already promised universities costs of just 2.5% of what they currently pay.

A number of new shareholders were brought on board to ensure a majority African ownership, in compliance with the ruling of the South African government. As it stands, 50% of that ownership originates in South Africa and 26% is Kenyan, while US-based development group Herakles Telecom controls the balance. The partners are Industrial Promotion Services, Venfin Limited, Herakles, Convergence Partners, and the Shanduka Group.

South Africa’s second fixed-line operator Neotel will control the Seacom cable in South Africa. Neotel received its licence as a national operator in December 2005 and has been conducting pilot projects since July 2007. The company says it is poised to roll out its commercial services in selected areas at first and will expand its coverage gradually.

Neotel’s investment in Seacom is R20-million – this includes the cable landing station and all other related facilities within South African territory.

Eassy a milestone in information infrastructure

Construction on the Eassy fibre-optic cable began in late March 2008 off the east coast of Africa. This cable, considered to be a milestone in information infrastructure in the region, will connect 21 African countries to each other and the rest of the world. Construction company Alcatel-Lucent says it is expecting the cable to come into operation during the first half of 2010.

Once complete, the project will be developed and managed by a consortium of 25 telecommunications operators, of which 19 are African. Among them are South African communications companies Telkom and Neotel, and mobile operators MTN and Vodacom.

Eassy will start in Mtunzini in KwaZulu-Natal and will stretch 10 500 km up Africa’s east coast. The cable will connect South Africa, Mozambique, Madagascar, Tanzania, Kenya, Somalia, Djibouti, and Sudan and will also extend to the Comoros Archipelago in the Indian Ocean. A further 13 neighbouring landlocked countries will be connected to Eassy through a World Bank project that is assisting with the installation of regional networks.

As with the Seacom project, it is expected that bandwidth costs will drop by at least two-thirds once Eassy is up and running, promoting economic growth in East Africa and facilitating access to knowledge.

Both Seacom and Eassy will operate on an open access basis, which means that any service provider may make use of the system. This, in turn, will increase competition, causing prices to fall even further.

Linking Kenya and the Emirates

A third exclusively East African cable system, The East Africa Marine System (Teams), is in the early stages of construction following the completion of the marine survey, environmental impact assessment and feasibility study. French company Alcatel-Lucent, which is currently working on Eassy, won the $82-million contract to build the cable.

This system will run almost 5 000km across the Indian Ocean to link Mombasa on the Kenyan coast with Fujairah in the United Arab Emirates. The cost of the project is estimated at $110-million. It will take around 16 months to complete. Internet costs are expected to fall by a third over five years.

The government of Kenya is the major stakeholder with a 40% share, while Etisalat, the Emirates’ leading telecommunications company, has signed up for 15%. It is expected that the remaining 45% will be snapped up by the Kenyan private sector, as well as a number of regional countries which have expressed interest in purchasing bandwidth.

Connecting every country in Africa

Nepad’s proposed undersea cable, which is supported by South Africa’s Department of Communications, will connect every country in Africa with the outside world. The undersea portion of the ambitious project is named Uhurunet, while the terrestrial section is named Umojanet. The 45 000 km-long Uhurunet will completely encircle Africa.

However, in order to implement the project Nepad first required the enforcement of the Kigali Protocol, which dictates policy and the regulatory framework for the cable. For this to happen a minimum of seven countries had to ratify the protocol. Having been ratified in February 2008 by the seventh country, Malawi, the protocol has now come into force. Malawi follows Lesotho, Mauritius, Rwanda, South Africa, Tanzania, and Zimbabwe in ratifying the Kigali Protocol.

“We expect construction of the submarine cable to start soon, and to be completed before the 2010 Fifa World Cup,” said Dr Edmund Katiti of Nepad.

Early estimates put the cost of the project at around $2-billion. The first official inter-governmental meeting took place in Johannesburg during the last week of March 2008.