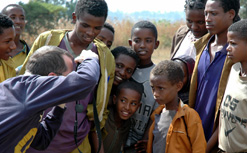 A photographer in Ethiopia. There are
many uplifting stories needing to be told all
across the continent, without focusing on
war, corruption and poverty.
(Image: Stock Exchange)

Africa will soon get a new dedicated 24-hour independent news channel. In the spirit of CNN, Al Jazeera, the BBC, and South Africa’s own recently-launched eNews channel, A24 will bring news from the African continent delivered from an African perspective. The Nairobi-based initiative is the brainchild of Kenyan Salim Amin, the son of renowned cameraman Mohamed Amin, who died in a plane crash in 1996.

Previously, Africa has depended on international news services such as Reuters or Associated Press to tell its stories. Since these media houses tend to rely on hard news for their content, all too often the picture painted of Africa is a bleak one that sends the message to the world that war, corruption, poverty and upheaval are the norm on the continent.

While this may hold true for certain regions, it is not the only truth. All across Africa there are exciting stories of hope, upliftment, and innovation that are just waiting to be told, and they too are the realities of living in Africa. A24 will step into that gap, presenting a more balanced view of the continent by offering user-generated content focusing on business and economic growth, culture, sport, healthcare, wildlife, as well as current affairs.

Initially, says A24 chair Amin, the channel will operate as an online agency for pan-African video footage and still images, focusing on the “news behind the news”. Amin and his team aim to give African journalists a platform that will expose their stories to international broadcasters while still allowing them to keep their copyright and, with a 60:40 revenue split in favour of the contributor, to earn decent wages from their hard work.

Amin hopes that this will have a knock-on effect and put contributors into a better position to continue submitting their stories. “Getting hard news on a daily basis from around the continent is a hugely expensive exercise,” he says, “which is why we decided to go the agency route as opposed to starting a 24-hour news channel first, which was our original plan.”

Features with a fresh angle

Journalists, broadcasters and NGOs may submit their stories to the editorial team at the A24 offices in Nairobi, Kenya, where material will be sub-edited and checked for accuracy. The finished product will be an A24-branded story of the highest technical and journalistic quality, which will then be marketed to broadcasters worldwide. Interested parties can view and purchase all material online.

“We want to start by giving broadcasters around the world an option to pick up features on Africa that highlight other aspects of our continent,” says Amin, “such as business successes and opportunities, sport, art, culture, environment, history and some current affairs as well. This is content that they are not able to get anywhere else as they rely mainly on Reuters or AP, or the main international broadcasters, for their African content.”

The A24 test site has performed to Amin’s satisfaction and went live at the beginning of September, on schedule. Channels of distribution will include satellite and cable television, radio and the internet.

A24’s advisory board comprises a group of eminent journalists with many years of shared experience in the international media. Chris Cramer, John Owen, Max Uechtritz and Jeff Koinange have worked for Reuters, CNN and the British, Canadian and Australian Broadcasting Corporations, have won a number of awards, and have travelled the world covering events of historical importance.

But A24 has its roots in journalistic history too – Salim Amin’s late father Mohamed was a widely respected photographer and cameraman whose coverage of the 1984 famine in Ethiopia eventually led to the foundation of the Live Aid global charity initiative.

Mohamed was also the founder of Camerapix, established in 1963 in a small shop in Dar es Salaam, Tanzania. The company has since grown into a modern, independent media concern employing more than 30 media professionals. Camerapix is not only a repository of over four-million images of Africa, Asia and the Middle East and more than 8 000 hours of valuable footage, it also offers television production, publishing and photography services.

Salim Amin began his career in 1992 in Somalia during Operation Restore Hope, the ill-fated peace-keeping mission that was intended to provide relief to starving people but led to the Battle of Mogadishu. Working with his father, he also covered the genocide in Rwanda, the bombings in Mombasa in 2002 and other events both peaceful and violent. After his father’s death he took the helm at Camerapix and later established the Mohamed Amin Foundation, which is now regarded as one of Africa’s premier broadcast training schools.