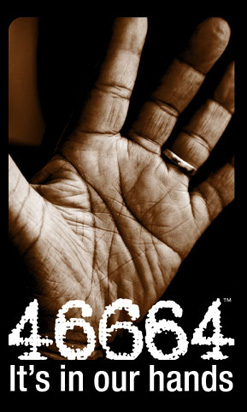 It’s in our hands, the iconic logo
bearing the hand of Nelson Mandela
and the 46664 foundation’s stance on
dealing with the HIV/ Aids pandemic.
(Image:46664)

Making a positive contribution to the fight against HIV/Aids is now at the fingertips of more than 37-million people.

South African mobile service provider Vodacom and 46664, the Nelson Mandela Foundation’s HIV/Aids division, have partnered to create a drive that gets mobile phone users to make a donation at the touch of a few buttons.

Some 37-million customers on the Vodacom network around Africa will be able to download the iconic 46664 logo depicting the palm of Nelson Mandela using their internet-enabled mobile phones. Known widely as the “It’s in our Hands” logo, it will be available at a cost of R10 when users text 46664 to the number 31116. SMSs are free for Vodacom customers and all profits from the initiative will go to the 46664 campaign.

“Mr Nelson Mandela once said that to win this fight, we must do more. The “It’s in our Hands” wallpaper available on Vodafone Live! is one of the ways Vodacom continues to unite our customers to get involved,” says Dot Field, chief communications officer of Vodacom.

“By supporting 46664 and the Nelson Mandela Foundation we are providing funds to assist those making such a difference on the frontline in the fight against HIV/Aids, and most importantly giving the South African public a chance to do the same.”

The 46664 campaign took off in 2003 when the former South African president and iconic anti-apartheid activist called on entertainment and sport stars to join the fight against HIV/Aids. The initiative was aimed at young people, who are the age group with the highest rate of new HIV infections around the world.

That same year, with the backing of the Nelson Mandela Foundation, a group of music, sport and entertainment celebrities made appearances at the inaugural HIV/Aids awareness concert at Cape Town’s Green Point Stadium.

The event was broadcast worldwide via radio, television and the internet and artists included the Eurythmics whose lead singer Annie Lennox has been championing HIV awareness and human rights causes since the 1980s. Other guest artists included the remaining band members of the group, Queen. The band’s lead vocalist, Freddie Mercury, died from an Aids related illness in 1991.

Since then concerts have been held every year in various locations around the world and have been witnessed by more than 1-billion people and always feature the who’s who on the music scene.

Tim Massey, International Director of 46664 says, “Madiba, who celebrated his 90th birthday earlier this year, is as passionate and committed as ever to the fight against HIV/Aids and the de-stigmatisation of the disease not only in our country and continent but indeed the world over. Our appeal is that every South African will proudly display the 46664 “It’s in our Hands” digital wallpaper and in doing so, they will demonstrate compassion, unity and empathy with those living with HIV as well as their families.”

People downloading the logo will automatically be entered into a lucky prize draw. Every day, one lucky mobile user could win a silver 46664 bangle. The bangle, which is made and packaged by South African artisans and bears the 46664 digits was unveiled this year and is available worldwide in silver, gold and platinum.