A scene from the 2006 Oscar-winning
South African movie Tsotsi, which was
shot in and around Johannesburg. 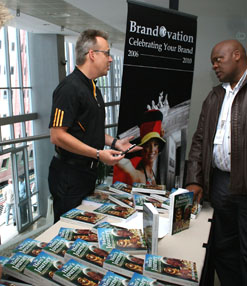 Dr Nikolaus Eberl chatting to a potential
buyer of his book, The Hero’s Journey. 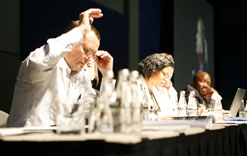 Paul Raleigh, the producer of Tsotsi, was
part of a panel discussion at the indaba. 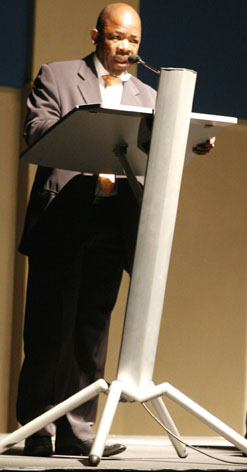 Hundreds of filmmakers from across South Africa and the world gathered in Johannesburg to discuss opportunities the 2010 Fifa World Cup would open up to the film industry, at the second Gauteng Film Indaba, held at the Sandton Convention Centre on 12 November.

With the theme Beyond 2010, the event attracted industry representatives, journalists, young and aspirant filmmakers seeking to join the industry.

Film-funding organisations such as the National Film and Video Foundation and the Department of Trade and Industry were also represented on the various panel discussions.

The indaba was held under the auspices of the Gauteng Film Commission (GFC), a body set up by the Gauteng provincial government to ensure the development and promotion of the province’s audiovisual industries.

Growing the film industry for 2010

The indaba’s theme was inspired by the need for the film industry to latch onto the opportunities in telling the South African story to thousands of football lovers set to descend on the country in 2010.

GFC stressed two key areas the film industry could capitalise on in the run up to the World Cup. First, according to the commission, there are several opportunities available for the industry to showcase Gauteng and its locations to the visitors.

Second, there is still a need to bolster the technological and infrastructural asset base in the province and other parts of the country from which the tournament will be broadcast.

Overseas broadcasters will have to hire local crew and broadcast equipment if they are unable to bring their own. The industry needs to ensure there is enough equipment and infrastructure to meet this demand.

Opening the conference, Terry Tselane, CEO of the GFC, spoke of the economic drive the film industry has had in Johannesburg, one of the country’s fastest growing film locations after Cape Town, which has long been a favourite for international crews.

In the 2007 financial year the film and television industry contributed R2.5-billion (US$ 25.3-billion) to the province, creating 8 000 jobs.

The GFC has also helped develop Project Egoliwood to investigate the size, scope and skills availability of Johannesburg’s film industry.

The commission has also been instrumental in launching the Gauteng Film Partnership (GFP), which will now move into the second phase of the project. Eleven members of the GFP meet every month to discuss new developments in the industry.

Other GFC initiatives include issuing of 200 filming permits to shoot in Johannesburg and hosting free movie screenings in rural townships where many don’t have access to cinemas.

The two keynote speakers at this year’s event were motivational speaker and brand innovator Dr Nikolaus Eberl, and Jon Hendry, a producer from the Sante Fe film industry in New Mexico, US.

Eberl, of the Nations of Champs Initiative, spoke on the ability of the film industry to bring stories from the local football fraternity to the rest of the world.

In his 11-step “Hero’s Journey” presentation, Eberl took delegates through the journey of transforming the image of Germans as cold, unfriendly people, to a country of warm and welcoming people ahead of the 2006 Fifa World Cup in Germany.

About 20 months before the tournament, economic difficulties, job losses and a poorly performing national soccer team had dampened the spirit of Germans, to the point where they were described as “collectively depressed” by the president, Horst Koehler.

Consumer spending had reached an all-time low as job losses increased. The retail sector was hardest hit, as people held on to their pennies.

This became a sore point for the government, with the prospect of thousands of football lovers from across the world coming to a Germany where citizens were “grumpy and stingy”.

The strategy used to transform this mindset was to make Germans proud of who they were, by focusing on the positive things that were uniquely German, which they could then share with the rest of the world.

According to Eberl, South Africa finds itself in a similar position, and the film industry could capitalise on this by making feel-good movies that not only speak to South Africans, but also help the world understand South Africans themselves.

Eberl screened a the movie Goal!, made with the endorsement of Fifa, about a young Mexican boy called Santiago Munez who dreamed of becoming a top football player.

As a young child Munez flees Mexico for the US with his family, taking his football dream with him. He grows up to play for the local league and is spotted by a talent scout.

But his father believes that Mexicans, particularly illegal immigrants like them, can only ever amount to informal labourers. He encourages his son to forget his football dream and focus on building the family business.

Munez secretly starts saving money to go to England for trials where he has been promised top soccer agents would attend. After battling a number of setbacks and overcoming hurdles along the way, Munez’s story has a happy ending, with his father acknowledging his son’s talent.

This is the type of material the local film industry could be showing, Eberl said, using stories of local soccer players and the unique challenges they faced growing up in South Africa.

This, he said, would not only uplift the morale of South Africans, but also help the world appreciate the South African story.

A lesson from New Mexico

US filmmaker Jon Hendry encouraged the local film industry to improve its technical skills base.

He told delegates that in his home town of Sante Fe the local film industry set up a union, IATSE 480, Film and Television Technicians of New Mexico, whose members are collectively involved in the production of Hollywood films shot in New Mexico.

As they are highly trained, the IATSE technicians have positioned themselves to be the preferred choice in the industry. Big production companies are also kept in check, with working conditions stipulated by the union. The benefits include healthcare insurance and retirement.

Hendry encouraged the local film industry to become boisterous, almost aggressive, in producing film that would be unapologetically South African.

He gave the example of the New Mexico cable network’s ethnic Italian and Spanish television channels, which offer content that not only those communities can relate to, but the average American can find entertaining.

According to Hendry, there’s nothing stopping South Africa from infiltrating these types of channels as there are millions of Africans living abroad who would appreciate the content – and Americans could enjoy it too.

He said the South African film industry was not visible enough, and that problems preventing the industry from growing to maximum potential should be thrashed out at forums like the film indaba.

Six breakaway discussion sessions were held in the second half of the day. The panels were attuned to industry specific needs and were divided into six sections.

The “Film-friendly Gauteng – fact or fiction?” session involved filmmakers voicing their frustrations with dealing with film offices in Johannesburg.

It emerged that one of South African filmmakers’ biggest concerns was the exorbitant rates charged to production companies for closing roads and using public locations to shoot.

Lisa van Allen of the Sante Fe Film liaison office also spoke of the experiences of New Mexico filmmakers, in terms of obtaining the relevant filming permits from government departments, and how they have set up structures to ensure that there is synergy between the departments and the production companies.

Representatives from the Johannesburg City Council were present to address the concerns of the industry.

A forum for young up-and-coming filmmakers entitled, “So you want to be a filmmaker?” allowed newcomers to interact with established writers, producers and directors, with a view of gaining knowledge of how to go about entering the seemingly close-knit television and film fraternity.

Panellists shared their stories of how they got into the industry, and also advised the young talent on the do’s and don’ts.

The session, “Thinking out of the box: A role for alternative distribution” looked at how filmmakers can get their work out there without using the conventional cinema-release route.

In 2008 South African filmmakers have explored new and creative ways of getting their films out into the market. This gives further rise to questions of the accessibility of film in South Africa, outside of cinemas. Those attending the session were given advice on how to conceive creative distribution plans and ways of building an audience.

The thorny yet crucial issue of funding was also tackled during the indaba.

The question here was, “When it comes to the difficult world of film financing, is there still a success formula for independent filmmaking?”

Film funders and seasoned producers shared their experiences on ways film practitioners could make a bankable project, how to break even and also make a profit.

The “Film infrastructure and capacity” session looked at ways that the industry could continue investing in the infrastructural capability of the Johannesburg film and television sector.

Studio and equipment needed to service the sector is adequate at the moment, but there is a growing need to find creative ways to keep the industry well stocked

A heated and robust debate erupted around issues of transformation within the film industry. Research into the transformation of the industry shows that while more than 50% of the industry workforce in Gauteng is female and there is an almost even split between black and white, those in powerful management positions are still largely white and male.

Black filmmakers need to not only rise up in the technical ranks, but also move into areas of ownership and senior management.

While many positive advances have been made and several programmes launched by both the private sector and government parastatal such as at the National Film and Video Foundation to pour money into the development and training of filmmakers, transformation so far has been company-specific, with production companies choosing their own levels of black empowerment.

The heated discussion on transformation eventually ran out of time, without specific resolutions being made. But there is talk of making of the transformation of the industry the main subject of conversation at future indabas.

It was established that South Africa, especially with its history of racial discrimination, had an obligation to take the issue more seriously, to ensure that the film industry is kept free of discrimination and prejudice. 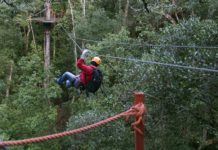