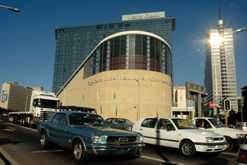 October is the month for print media, photographers and web journalists to apply for accreditation for the final draw for the 2010 Fifa World Cup.

The draw event, to be held from 2 to 5 December in Cape Town, will not only determine the groups in which qualifying teams will play, but will also see a number of press conferences, the opening of Green Point Stadium, a media expo on future World Cup bidders, and more.

The media accreditation process for the final draw opened on 1 October, and closes on 30 October. The accreditation application form can be found in the Fifa World Cup section of the Fifa Media Channel.

The draw itself will take place at the Cape Town International Convention Centre (CTICC) in Cape Town, South Africa at 7pm on 4 December. Media-related information for the draw – media accommodation, media facilities and activities throughout the draw week – is available on the Fifa Media Channel.

Once an application has been made, the applicant’s information will be subject to a review process by Fifa and the World Cup Organising Committee. There will also be a mandatory screening by the South African National Intelligence Agency. Successful applicants will be notified by e-mail.

This process is only for written press, photographers and websites.

There will be a separate accreditation process for rights-holding television and radio broadcasters, which will be managed by the Fifa Broadcaster Servicing Team on behalf of Fifa TV. For more information on broadcasters’ accreditation for media rights licensees, contact FIFABroadcasterServicing@fifa.com.

The main media activities during the final draw week are:

10h00 – Fifa Executive Committee meeting on Robben Island. Due to limited capacity, a special registration will be required. Further details will be provided on the Fifa Media Channel.

The prisoners then built their own goals and would swap their drab prison garb and play in the colours of their teams on Saturdays. The Makana Football Association was founded on Robben Island in 1969. It was a football association which adhered strictly to the Fifa Statutes and principles and the Laws of the Game. On 18 July 2007 the Makana FA became the first Fifa honorary member association.

9h00 – Team seminar at the CTICC. Open to TV crews and photographers for the first five minutes.

9h00 to 12h00 – Media expo by the 2018 and 2022 Fifa World Cup bidding countries. This will provide the 11 bidders for the next two World Cups an opportunity to present their bids to the media. The bidding countries are Australia, Belgium-Netherlands, England, Indonesia, Japan, Korea Republic, Mexico, Qatar, Spain-Portugal, Russia and the US.

The event will take place at Workshop 17 at the V&A Waterfront, and will include interview opportunities with representatives of the bidders. Media transport will be arranged from the media hotels and the CTICC to the venue.

This event is independent from the final draw, so separate media accreditation will be required. The accreditation procedure for the expo will be conducted via the Fifa Media Channel.

19h00 – Worldwide broadcast of the final draw, followed by a mixed zone and a host city exhibition.

10h00 to 11h00 – Opening of the first Football for Hope centre in the Cape Town township of Khayelitsha.

12h00 to 18h30 – First World Press Day at the CTICC to provide media with first-hand information on the preparations for the 2010 Fifa World Cup, and on South Africa.

Media representatives who have not already registered for the Fifa Media Channel can do so at https://media.fifa.com.

The Fifa Media Channel is the primary communication channel between Fifa, the Organising Committee of each Fifa competition and the media.