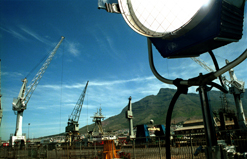 Already a favourite with both Hollywood and Bollywood, Cape Town is set to get a new boost as a prime film location when overseas media hit its shores for the 2010 Fifa World Cup final draw in early December.

The draw, to be held at the Cape Town International Convention Centre on 4 December, will determine the match order for world’s top 32 teams playing in next year’s tournament.

The Cape Film Commission (CFC) markets and develops the film industry for the city and greater Western Cape province, and is working hard to ensure foreign media have access to the best technology during the draw and next year’s cup – the first to be contested on African soil.

The British Broadcasting Corporation is just one of the major international media organisations that have already started operations in the city.

“We have successfully facilitated the presence of the BBC in Cape Town for six weeks before and during the draw, and in 2010 it will broadcast all matches live from its studio in the city,” the CFC said. “This is one of the most significant marketing opportunities for us.”

There are also plans for the BBC to broadcast programmes such as BBC Africa and its history channel from Cape Town during the World Cup.

This will have positive spinoffs for city, as the broadcaster will partner with local production companies and stay in hotels and guest houses in the region.

“Cape Town and the Western Cape has become a global film industry destination and 2010 will be a crucial year during which we will have to up our game as the rest of the world’s eyes will be on us,” said Laurence Mitchell, the commission’s CEO.

Over the last decade the city has become an increasingly popular location for high-profile filmmakers, due to its spectacular and varied scenery; and the presence of the CFC, which puts international crews in touch with the right service suppliers and facilities to ensure a smooth production process.

According to the CFC, deals were struck to bring seven major film productions, including Hollywood and Bollywood titles, to Cape Town in 2009.

The most exciting in this line-up is the film Invictus directed by Oscar-winner Clint Eastwood and starring top Hollywood actors Morgan Freeman and Matt Damon.

Due for release in December, the film is based on John Carlin’s book The Human Factor: Nelson Mandela and the Game that Changed the World. It tells the story of South Africa’s 1995 Rugby World Cup victory on home turf, when then president Nelson Mandela joined forces with rugby captain Francois Pienaar to help unite black and white South Africans after the fall of apartheid only a year before.

Mandela is played by Freeman, whose previous productions include The Dark Knight, Evan Almighty and Lucky Number Slevin, while fellow Oscar-winner Matt Damon – star of The Departed, Ocean’s Thirteen and The Bourne Ultimatum – will play Pienaar.

“This is by far the biggest film ever made in Cape Town, with at least 70% of the production process taking place in the city,” the CTC said.

Another production in the pipeline is Heaven and Earth featuring the lead star of four James Bond films Pierce Brosnan. The film is a romantic drama set in 1826 when the Cape was still a British colony.

Lion of Judah, the first full-length South African film using computer-generated imagery, was also recently made in Cape Town and is set for international release soon.

“Laconia is another big budget film being produced locally. It’s based on the sinking of the RMS Laconia by a German submarine off the West Coast of Africa during World War II,” the CFC said.

The film is being made by Cape Town-based Two Oceans Production with a budget of more than R60-million (US$8-million). “All the services, suppliers, equipment, materials and back-up crew have been sourced from the city,” Mitchell said.

Formula 1 champion Lewis Hamilton recently arrived in the city to shoot a commercial for a European bank. The piece, made by Cape Town’s Farm Film Productions, was shot over three days in the 4km-long Huguenot Tunnel that runs east towards the scenic Cape Winelands.

“This was a huge technical operation that involved helicopters, lifts and a local crew of about 150 people. Having someone of that stature coming here to do a major shoot is great endorsement for the region and South Africa. It shows that international stars have confidence in our production capabilities,” Mitchell said.