The South African Tuberculosis Vaccine Initiative (SATVI), one of the leading TB vaccine research organisations in the world, is to expand its capacity to store blood samples from people who take part in its research, thanks to the donation of a new liquid nitrogen tank by Vodacom.

According to the World Health Organisation, South Africa has the second-highest TB infection rate in the world. One percent of South Africa’s population develops TB every year, while 1.7-million people around the world die from it annually.

The situation has been exacerbated by the co-infection of HIV/Aids and TB, with TB being a major cause of death among people with HIV. South Africa, with its high TB and Aids infection rates, is now at the epicentre of the global HIV/TB pandemic, and there is an urgent need to control this epidemic.

Earlier this month, the Vodacom Foundation officially handed over the new liquid nitrogen tank to SATVI, which is based at the University of Cape Town’s Institute of Infectious Disease and Molecular Medicine.

“As the largest dedicated TB vaccine research group in Africa, SATVI is playing an invaluable role in the fight to eradicate this disease,” Vodacom Foundation chairman Mthobi Tyamzashe said in a statement.

“We are pleased to provide this new tank and data back-up facility that we trust will enable the organisation to strengthen its important work.”

The new tank will have a capacity to store 36 400 vials of blood products in temperatures as low as -195 degrees Celsius. The stored samples are later analysed to determine whether the vaccine has stimulated the immune system adequately.

Vodacom also donated a data back-up system that will allow SATVI to perform back-ups of the research information it has gathered, to ensure that valuable data is not lost.

The total value of the new tank and the storage system is R528 000, and is donated as part of Vodacom”s growing contribution towards improved health facilities.

This is the second large-scale contribution to SATVI from Vodacom. In 2005, a contribution of R2-million was also made to fund SATVI’s laboratory at the University of Cape Town Health Sciences Faculty.

Experts agree that a good vaccine against TB is the most effective way to fight the disease. SATVI says that the only vaccine currently available, BCG, is given to babies soon after birth. However, the vaccine is only effective in preventing serious forms of TB in children, but not lung TB.

The organisation is part of a global initiative to develop and test more effective vaccines against TB. It is currently conducting the most advanced study of a new TB vaccine in infants in the world, and is also the only site to be testing multiple new TB vaccines.

Research involves giving a TB vaccine to a number of individuals, and then collecting and storing blood in specialised liquid nitrogen container tanks. Blood samples are later retrieved from the cold storage to measure how the vaccine has stimulated the immune system.

Since the research is conducted over a lengthy period of time, adequate storage space for the samples is a crucial issue. 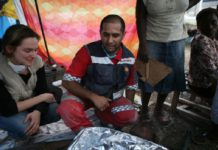