An effort to bridge the communication divide between commuters, drivers, taxi associations and owners is being made by two young men from KwaZulu-Natal.

Give Life Projects has pioneered a mobile service available to every taxi commuter, called Wiser Driver. By dialling 1204577#, commuters now have a voice and are invited to speak about their commuting experiences with full assurances that the right owner of the vehicle will receive their concerns.

Msomi told Redbull Amaphiko: “The platform we have created to give a voice to the commuters comes at a cost. Primarily, the bigger challenge is awareness. The taxi industry, particularly the drivers, have been stereotyped to behave in a manner that endangers commuters or other road users.

“While some cases are true, this is not the entire picture of the driving community. Also, taxi owners themselves are usually unaware of what happens in their taxis while they are in operation. This project has allowed us insight into their lives and they are genuinely concerned for their commuters as they provide the bread they get to place on their tables.”

Taxi owners, like their customers, the commuters, are not currently in a position to receive concerns and comments in a timely manner.

Wiser Driver offers commuters road safety education and information, such as the importance of wearing seatbelts. It can also be used to report bad behaviour or excellent service from drivers. It is currently available in English and isiZulu to commuters in Durban and surrounding areas. Standard USSD charges apply for usage.

For the 15th annual Durban Business Fair in 2013, Msomi and Mbambo developed a mobile competition system that was the catalyst for Wiser Driver.

Msomi explained: “For that project, we created a web application that was used to register and automatically enter into the competition the visitors and exhibitors that attended/participated in the Business Fair.

“After that success, Give Life Projects championed a tavern campaign in 2013 in partnership with the KZN Liquor Authority and Brandhouse. In this campaign, tavern owners were given first aid training, fire awareness training, first aid kits and fire extinguishers. As a means of collecting data on the success and progress of the initiative, we asked tavern owners to give us feedback via USSD with the names of people they have assisted in their taverns.”

USSD is Unstructured Supplementary Service Data. It is used by GSM mobile phones to communicate with the service provider’s computers. In essence, it is used for browsing, prepaid callback service, mobile-money services, location-based content services, menu-based information services, and as part of configuring the phone on the network.

Wiser Driver has partnered with 16 taxi associations in Durban and should a user report any issues, the problem is immediately communicated to the owner of the taxi in question as well as the taxi association under which the taxi operates.

Internal disciplinary policies of the taxi owner’s operation and taxi association come into play after the report is made.

“We wanted to introduce an independent system of accountability for taxi drivers and a degree of transparency by facilitating communication between commuters and taxi owners,” Msomi said.

“Aside from taxi owners, drivers and associations, other players that work with this sector have also given us a great reception as well. The likes of these are our partners, namely: CMH DatCenter Durban, Miami Towlines and Jacks Tyres.”

The significant challenge was creating an application that could be accessible from any mobile device. That challenge was met, and roll out has been smooth.

“The challenge remains now to bring this application to the attention of as many people as possible in order to establish a new standard in the taxi industry,” Mbambo said. “We share our project in order to cultivate ambassadors who will help us help the owners be more responsible and more concerned and act accordingly when commuters communicate their concerns to them.”

Soon after its launch, Wiser Driver received its first reports from a commuter, commenting about a taxi driver.

“We received our first negative report from a commuter about a particular driver who was speeding excessively. The owner of that taxi was very quick in addressing the issue with his driver,” Msomi said.

“After observing the data that we had collected from the system, we then held a series of feedback sessions with our stakeholders. As unconventional as this seems, the thinking behind it is to decrease the chances of that particular taxi being involved in or causing an accident. By chance, they said the taxi was also in need of a good set of tyres .Together with our partners, Jacks Tyres and CMH DatCenter Durban, we announced a pre-emptive measure action plan where we gave a brand-new set of tyres to the taxi.”

The other participating taxi owners were given wheel alignment vouchers, courtesy of Jacks Tyres and CMH DatCenter Durban. 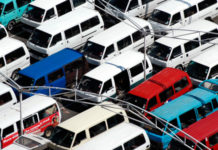