“When I think about uTata and all that he has given us I know we will never see another man like him. He had a heart of hearts,” Abigail Kubeka says. (Image: Abigail Kubeka)

Abigail Kubeka, with a voice as strong and clear as it was four decades ago, shares her memories of times spent celebrating with former president and fan, Nelson Mandela. “Forever I will remember him saying, ‘Ooh Abigail’, whenever we sang one of his personal favourites.”

The songbird was among Mandela’s first visitors when he returned to his home on Vilakazi Street. Kubeka remembers the warmth of his smile when he laid eyes on her. As she talks about those early days before he was claimed by the world as an icon, her voice cracks. “He asked about Dolly and Miriam. Even in prison, he followed our music. He said we spoke to people through our music.” 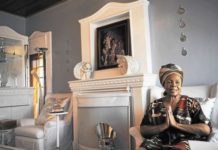