The Play Your Part TV series will feature 13 episodes of 48 minutes each, and will be hosted by Kabelo Mabalane (pictured in the centre)

South Africans who are doing the country proud with their positive work will be highlighted in a television programme created by Brand South Africa and SABC 2, which launched the Play Your Part TV Series at the Market Theatre in Newtown on 11 June.

As the nation celebrates 20 years of freedom, the show aims to inspire the people of the country to do the smallest of things that will affect another person, to make South Africa a better place. The show will air from Sunday, 15 June on SABC 2 at 9pm. The series will feature 13 episodes of 48 minutes each, and will be hosted by Kabelo Mabalane, a kwaito star, Comrades Marathon runner and recovering addict. Mabalane has been playing his part by highlighting addiction and doing various charity work.

Mpumi Mabuza, the stakeholder programme manager at Brand South Africa, said: “We are happy to be launching this inspiring TV series at the newly named John Kani auditorium at the Market Theatre. How fitting for us to launch such a programme in our 20th year of freedom on a stage named after a South African theatre and television legend.”

Play Your Part is a nationwide campaign created to inspire, empower and celebrate active citizenship in South Africa. It aims to lift the spirit of the nation by inspiring all South Africans to contribute to positive change. “There are amazing people doing amazing things every day, in every part of our country, and the Play Your Part platform is perfect for you to share your stories, and to celebrate each other as citizens of our wonderful country,” said Sithembile Ntombela, Brand South Africa’s brand manager.

The chief executive, Miller Matola, recalled how South Africans rejoiced four years ago when the country hosted the football World Cup. “We are launching this programme on a day that brings much joy to me. It was this time four years ago that I was filled with pride to be South African,” he said.

Matola spoke about how everywhere he went he could tell who was South African by how proudly they stood. “South Africans everywhere were walking upright as a sign of pride for hosting the World Cup with no major glitches and showing the world how good they are at being hosts.”

He also told the audience how Brand South Africa was the custodian of the image of the country and that Vision 2030 was the next World Cup for South Africa. Every citizen should help to bring it to fruition.

The National Development Plan, or Vision 2030, is a plan to eliminate poverty and reduce inequality by 2030.

LET’S ALL BE CHANGE AGENTS

Mabalane, who rose to fame in the late 1990s as part of the trio TKZee, a kwaito group, said he believed the good in South Africa outweighed the bad – and that was why he agreed to be part of the show. “My epitome of active citizenship is the youth of 1976, who I believe showed what a group of ordinary people could do if they put their heads together.”

He had fun recording the TV series and gaining insight into events like choosing South Africa’s flag after the first democratic election. “After seeing some of the entries of the designs for the flag, I thank God some were not chosen,” he said, to much laughter.

Some of the inspiring stories featured on Play Your Part are:

● Mercy Senyatsi, a life orientation teacher at Dr AMS Makunyane Secondary School in Polokwane, Limpopo. “Originally, I was inspired by my late parents who raised and tutored many children, irrespective of their family background,” she says. Throughout her career, Senyatsi says she has been touched by the plight of orphaned and vulnerable children. She is living up to her name, bringing mercy and hope into the lives of those who most desperately need it.

● Emmanuel Khumalo, founder of Numbers Foundation in KwaMashu, Durban. “In November 2013, I launched Numbers Foundation, a non-profit organisation with the main objective of providing extra lesson tuition, fighting bullying and discrimination, and aimed at getting kids off the streets and into homes and back to school. We believe that education, shelter and love are important. My name is Emmanuel Khumalo, I am 18 years old and I live in KwaMashu, Durban and my story is of educational change. I am the founder and the president of Numbers Foundation, a foundation aimed at improving and changing our country.”

● Trevor Knowlden, founder of Freewheelers Cycling Club in Steenberg, Cape Town. “[We use] the bicycle as a lure to keep youth away from drugs, substance abuse, and teenage pregnancy and growing the numbers of gangs… In 2004, I founded Freewheelers Cycling Club to provide a healthy alternative to youth of Steenberg in the Western Cape. We take youth from various surrounding communities on mountain biking and road cycling outings.” 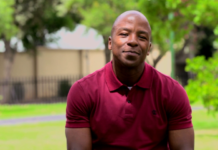 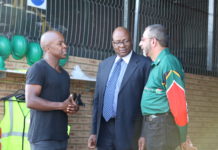